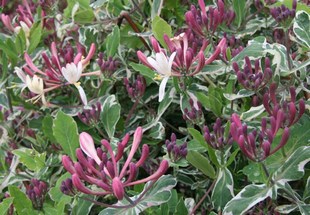 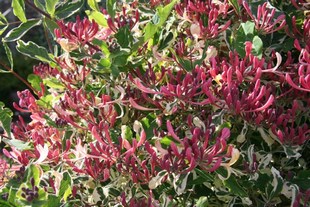 Am I pleased, even a little smug, that I slaved away at the staking in May! With all the rain and wind the beds could have been a sorry mess, but most things are more or less upright. Herbaceous plants are far taller than normal and nearly 2wks later coming in to flower here, but the Viola cornuta varieties look fantastic.

They were cut back to 1½ins in early autumn with enough time to grow a neat mound of protective foliage before the winter, and ready for the spring surge. When they are over, I will slash them back again so that even if they do not flower so much they will at least look green and healthy. Many of mine come from Elizabeth MacGregor in Kirkcudbright, who has a wonderful selection, difficult to resist. She recommends spraying early on as they are susceptible to aphids, easily missed until the plant looks sickly. They certainly look good this year.

The neat shrub Viburnum opulus Compactum has been on a yellow card after several years of a disfiguring affliction by some invisible insect, but last year, following the very cold winter, and on its final warning, it was fabulous- fresh leaves, white flowers followed by translucent amber berries. This year, horrid. 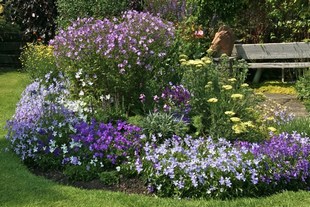 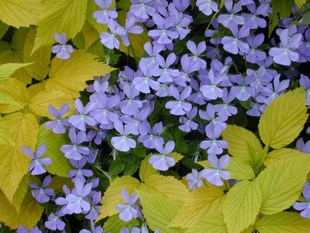 Discussing this miserable object with a visiting gardener, who had the same problem (the shrub not her) she was advised to spray for bugs at bud burst, which solved the problem. My previous attempts at spraying must have been too late. So it is reprieved yet again.

One shrub/climber that has had a long and unblemished life here is the honeysuckle, Lonicera x italica ‘Harlequin’. Bought many years ago, and now in several places in the garden – it thrives in full sun - with a cream/pink variegation to the leaves and masses of fragrant pink and yellow flowers. One cutting was kept in a pot with nowhere to go for years until I saw its potential in life as a lollipop. I added a strong support, cleaned off stem shoots and encouraged it to become a ball, by twining long growths in to itself in a clockwise direction. I eventually planted it with a steel rod for support, and it has been a great success. The head became heavy, bending to the ground when wet and windy and 2 more metal rods have been added. It is smothered in fragrant flowers now, and much admired. New long green growths show little variegation, but fear not, it does not revert, leaves on these stems next spring will sport those attractive cream and pink markings.