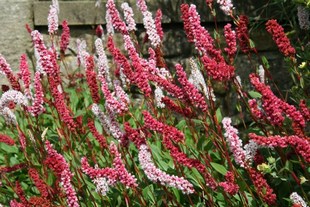 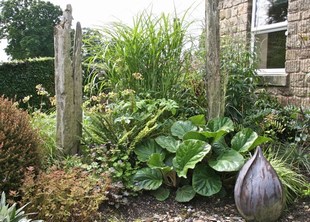 The cool and very wet weather has caused plants to grow prodigiously and flower 2wks later than normal, but little has needed watering and new planting has benefited.

The area surrounding the new water feature, planted in late April with plants filched from other parts of the garden, has thrived and is now my favourite place to sit with a coffee, soothed by the splishing water.

I particularly like the ‘little and large’ pairing of bergenias on either side the rill. Two small pots of the cracking new Bergenia ‘Pink Dragonfly’ were split up to form a good patch of small erect, shiny green oval leaves, mimicking the much larger, but similarly shaped leaves of the other bergenia. The latter I bought from an HPS speaker as unusual (Irish Crimson?), and it certainly has a good red winter colour, as also the small bergenia. I love the way in which these two plants, similar in everything except size, ‘connect’. I think that bergenias, chosen and planted well, deserve a better press, and I like them for their fantastic foliage alone.

I value highly my large and handsome Bergenia ‘Ciliata’, leaves beautifully arranged within the clump, both upper and lower surfaces glistening with silvery hairs. Said to be tenderish, the first leaves are often blasted by late frosts and cold winds as happened this year, but it soon recovers, and it has survived many cold winters. An excellent foil to grasses and ferns. 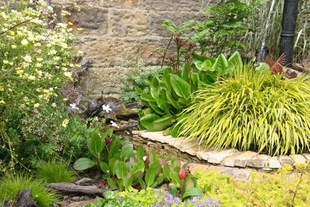 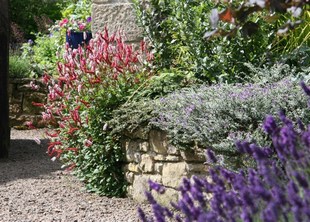 Another good plant has been Ranunculus acris ‘Sulphureus’ with masses of soft sulphur yellow buttercup flowers. I have had the plant years, but by splitting it, have been rewarded with six healthy new plants, far exceeding the total of the original, proving that many plants are stimulated into growth by division. Years ago I potted up some seedlings, selling a few for charity, before I found that 75% of seedlings prove to be plain meadow buttercup! Plants that are true to the parent sport a dark marking on the leaf.

Persicaria affinis ‘Dimity’, part of the original planting at the edge of this raised bed, hangs down the wall, and left to its own devices would proceed to colonise the gravel below. Very effective with many taper like flowers opening pink ageing brick red, from late spring until the frosts. The leaves turn a warm brown remaining until late spring. I once made the mistake of pulling off the leaves and hacking it back before the plant was making new growth, nearly killing it. I now wait and cut off only the flower stems and unwanted growth. Best in poorer soil where it produces more flowers.