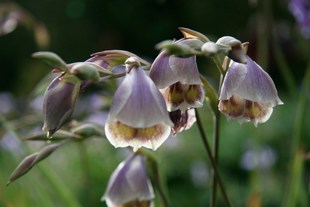 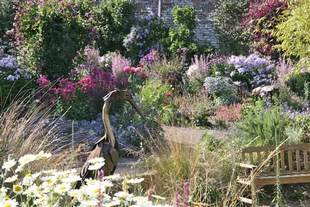 Walking through my garden in August is almost overpowering – the exuberance of colour and mass of flowers is a knock out! I do tend to get rather over excited as I marvel at fresh blooms and luscious combinations – plants are just so amazing. The viticella clematis are in full swing and make a wonderful backdrop, especially when teamed with similar colours in Phlox, Lychnis, Lythrum and Lilies. There are a few disappointments, that’s gardening, but there is always so much else to enjoy.

Some plants are very cheerful about this seasons constantly moist soil and have shown me what they ‘really really like’, but as I only water new planting, dry clematis and pots, they will have to put up with what comes naturally in future! 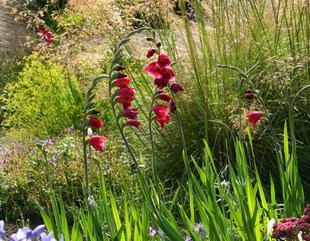 I have had the perennial Gladiolus papilio ‘Ruby’ for 5yrs, and love it’s dramatic, hooded ruby crimson flowers in late August, but last summer there were fewer flowers and lots of little leaves so I took the hint and dug up the small patch in October, being careful to save each little corm. I replanted half in the same place but with some added compost and bone meal, and hedged my bets by putting the rest into the cold frame in small pots of gritty compost over winter. The pots were very late coming into growth and, convinced I had killed them, poked them about every now and again to look. I think now that they were too dry, and responded to rain when I left the lids up in late spring, all to my great relief growing well, particularly when potted on into richer compost. I have read since that they do like moist but well drained soil.

Most of them went into the ground where I reckoned they were safer, and I have had far more and stronger flower stems than I expected. They have stayed more or less upright unaided, and taller than previously, so I am thrilled. A combination of no competition, fresh compost, food, and probably, the rain, has done the trick.

I have found that a mass of Beupleurum falcatum, and Stipa stems support them well and I am trying to think of other plants that will do the same job. They look ridiculous tied to a cane – but I have done it!

Gladiolus papilio, the species, never flowers here before the first of September, but I like the soft colours of dusty mauve and cream, and modest downward pointing blooms that warrant lifting to fully appreciate. Earlier in the summer the grey green erect leaves are attractive, particularly with a mauve Viola cornuted weaving through. Creeping steadily via stolons over many years, I had to drastically reduce its territory last year and many babies remain, but are easily pulled out of the gravely soil. Grown in richer soil (like Ruby) the stems are much bigger. Some visitors say it can be a nuisance, but kept in check I welcome it.