Last Month in My Garden: October 2012 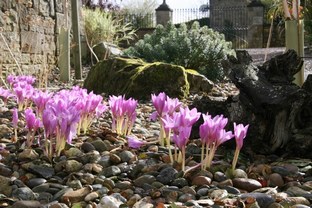 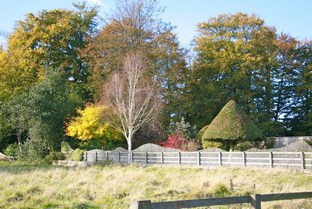 What wonderful colour this month. The garden has glowed in the low, slanted light, the best for many autumns.

Viewed from the field, the garden’s undulating lathe fence is effective, echoing the top line of the herbaceous planting, and the distant hills of Simonside to the north.

Within, the maple tree glows with butter coloured leaves, ‘sunshine on a stick’ according to one visitor, creating a glorious pool of gold beneath as they fall to the ground. Viewed against a bright blue sky, red juvenile leaves on the branch tips just add to the stunning eyeful.

The shrub Euonymus europaeus beams red and the startling white bark of the Jaquemontii birch reflects the autumn light. 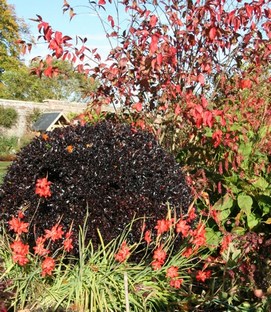 The E. europaeus ‘Red Cascade’ always flowers, but never provides the promised cascade of colourful berries, although autumn foliage is colourful. I am advised that it needs another of the same ilk in order to berry, which can even be planted in the same hole. After years of disappointment I have just planted another close by. We will see.

The shiny, crinkled maroon-black leaves of Pittosporum ‘Tom Thumb’ work well with the glowing scarlet flowers of Schizostylis cocchinea ‘Major’ in front and the red Euonymus foliage behind. Startling lime-yellow growth on the Pittosporum in spring, looks very clever with Heuchera ‘Limelight’ planted on its shady side. This fairly recent heuchera is proving to be the best of its colour so far, lasting well.

The young Pittosporum leaves gradually change to a maroon/black with a high gloss, and I have been delighted that it has survived in my North East garden. Although reasonably sheltered it has sailed through the recent arctic winters, so I feel it is here to stay. Have I just said a foolish thing?

After seeing topiaried examples in the balmy south I have recently given it a tentative trim to achieve more compact growth, which I hope will make it less vulnerable to distortion by winter winds. There is quite a hole in it at the moment. Trimmings are lovely in little flower posies for the house.

Three years ago I divided and replanted a small clump of Autumn crocus, before covering the area with cobbles, and they have responded magnificently with lots more flowers. Another gardener said that she splits hers regularly and has an increasing carpet of them every autumn. Having put cobbles down I doubt I will be interfering any time soon. The glorious pink cups of these ‘naked ladies’ have been a joy to behold in autumn sun but are now dashed by wind and rain.

The only down side is the large leaves which appear earlier in the year and loll about for ages before I can detach them. As with most things, they do need careful placement.

Wow, we have a covering of snow on October 27th! Is this an omen?