Last Month in My Garden: January 2013

and approximately 3.5 acres of it are tamed. It is roughly a rectangle; the long axis aligned more or less N/S. It is connected to the main road in the village by a narrow track and then opens out like a rectangular balloon on a string. The house is at the southern end.

It is a rather uninteresting, flattish bit of land enlivened by some very good ancient oak trees and a winter burn that carves its way along the eastern boundary. You can find it on Google Earth by typing in our post code (LL13 0LS) zooming in and moving a little north.

When we bought it, it was horse paddocks. We are now 13 years into a 20 year project to turn it into a garden. We do most of the work ourselves, but have had the help of a good general gardener/handyman for one day a week (Gerald) for the last 18 months and now find him indispensable.

Perhaps a word on ‘philosophy’. It seems to me that there are two approaches to gardening. In one the plants are subservient to design. Their purpose is to help the gardener to create the artistic effect that he/she is seeking. In the second design is subservient to plants. Its purpose is to create the environments in which interesting and beautiful plants can be grown. Whilst appreciating both types of garden ours adheres strongly to the second of these. We label plants. We often grow several of the same genus together to allow easy comparison. We usually buy the plant and then work out where best to plant it. You will not hear very much about colour combinations and planting companions in this blog. You may hear a bit about the natural environment of a plant and how to approximate this in a flattish, wet site in north Wales.

And now to the garden in January. 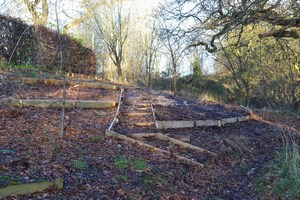 In our gardening calendar, November through to January is the time for new projects (all the other months are spent mainly on maintenance). This year we are enlarging one of our areas of shade garden, building a new ‘soggy’ bed to accommodate, amongst other things, some species irises we were given by Barbara Matthewman and taming a part of the eastern boundary that slopes steeply down to the stream. This will be planted with shrubs and small trees good for autumn colour. The first two are essentially finished, and the framework of paths and retaining planks is in place for the third.

The area was cleared of scrub by Gerald last summer, and the perennial weeds given a dose of glyphosate at the same time. The soil on the slope is thin, and the underlying clay is close to the surface here, so most of the labour this month has been in hauling compost and garden shreddings to help improve the soil. Life is too short to dig in compost and shreddings. We take the long view, put them on the beds quite thickly (4ins) and let the weather and the worms do the rest. It takes a couple of years but you do end up with a good rich soil. I doubt that we will have enough to complete mulching the whole area until well into the new year. However it is surprising how much excess woody material is provided by 5 acres and a good garden shredder has been essential to enable us to get the best out of it. The electric toys in garden centres are allright for a few rose prunings, but cannot survive the output of a big garden. Also don’t be over impressed by salesmen telling you that a machine can get through a 3 inch branch. A 3 inch branch should be used to help heat the house. What you need in a shredder is something that can take a much branched piece of hawthorn without you having to take the secateurs to it to reduce it to pieces that will fit in the hopper. Ours is an ‘Eliet Major’. It is big and heavy and was expensive but it works. 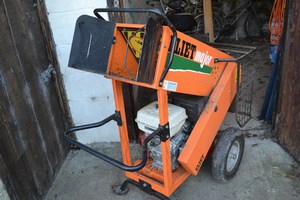 So much for the work this month, what about the plants? Unless we have snow or frost to liven up the naked branches, January is mainly about bark. Many of our trees and shrubs were planted with an eye to bark as well as flower and foliage. The birches pay you back quickly and we now have several species and varieties with good bark. My favourite is Betula pubescens. It was planted as a feathered sapling in April 2001 into a part of the garden that is often under water in wet periods in winter. This hasn’t bothered it in the least and it is now 20+ ft tall, has a good white bark and has a circular seat around it. 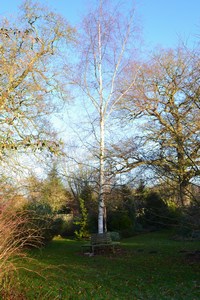 One of the few eucalyptus to survive 2010/11 with trunk intact (E pauciflora) has excellent bark patterning, but the Stewartias have a way to go before they are mature enough to rival it. There are some superb specimens in Dawyck, but we may have to wait a few years before we even come close. We have a few snake bark maples, but they were mainly seed grown and do not have as good a bark as some of the named selections. The big surprise is poplar. We have a line of 5 or so old specimens along the track up to the house. About 10 years ago I cut off a few straight branches from one of these and simply stuck them into the soil at the far north end of our plot with some vague notion about a wind break. Two survived and they are now close to 20 ft and have a superb smooth, light grey bark. I guess it will ridge and darken as they get older, but it is great at the moment. (From left to right in the picture below):

Some shrubs also have interesting bark. Cornusalba in its various forms is well known, and we have several, but it should not all be about colour. The Dipelta species shed their bark in hanging strips. We have a big specimen of D. floribunda that you can walk under and it can look quite spooky on a winter evening.

It suddenly occurs to me that I have not said anything about our soil... but that can wait for next month.