Last Month in My Garden: February 2013

The end of January and the beginning of February have been frustrating. It is an important time in our garden as we leave the dead herbaceous material in place over the winter and spend February clearing it off in time for the main flush of spring in March. The cold followed by wet weather have made it difficult to get out to work and so progress has been slower than normal. Gerald (our part time gardener) has been making inroads into cutting down the grasses. We grow a lot. In fact one area is devoted to them alone. We were very impressed by the grass garden that used to exist at Kew, and have planted a large area, mostly in miscanthus, carex and panicum varieties to try to get a similar effect. They look superb in autumn when in full flower and into the winter when edged with frost. The problem with them is that they do not compost well. If put onto a compost bin they form a layer of thatch that prevents moisture getting down to the lower layers. They do not shred easily when fresh, being too flexible. In the past we have weathered them for a year before shredding. This year we will commit the environmental sin of burning them!

The early spring flowers are coming through. Snow drops, aconites and hellebores have the biggest impact. We grow several hellebores. I am particularly fond of the robust species, argutifolius and foetidus. They flower early, hold their flowers for a long time and, apart from a brief period in early June, when the old stems look grotty and need removing, make a great backdrop for plants that flower later in the year.

I managed to get the foliage off the x hybridus forms before they started to flower and they are looking good. I’d like to give a warning here. I have been to several talks that imply that you should always remove the foliage from Hellebores (and Epimediums). I don’t think that this is not true. These are plants of deciduous woodland and woodland margins. One of their major opportunities for photosynthesis is the spring, before the canopy is in place. Surely this is why they hold onto their old leaves until May? Cutting off the leaves puts them on short rations. This is fine once the plants are big and have achieved the size you want. Then by allmeans make it easier to see the flowers, but whilst they are young please leave the leaves on until the plant tells you it has finished with them by starting to turn them brown. 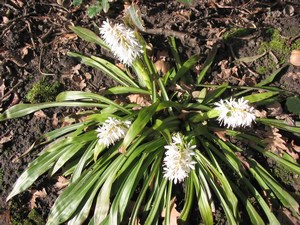 There are two other flowers of early spring that are worth mentioning. I think Ypsilandra thibetica is always worth a place. Most of the year it is an unassuming little clump of obovate, strap-shaped, evergreen leaves, but in spring it puts up a nice spike of tiny white flowers. It is easy in shade in any well drained, but not dry spot. In three or four years it will begin to make a large clump, but is easy to divide. Fork it up and then just tease the individual plantlets apart. Plant them immediately in a suitable spot.

The second is more ‘interesting’ than attractive. It is Scoliopus bigelowii, a member of the trillium family native to California where it is happy in the understory of Redwood forests. In early spring several unusual flowers emerge with the leaves. I will not attempt to describe them... just look at the photo. It is not big (perhaps 4 ins high). It is said to smell bad, but I have become increasingly anosmic with age, and so don’t mind. Once the flowers are finished the leaves put on more growth, becoming about 6 ins by 3 ins. It is also easy in a reliably moist site in shade. 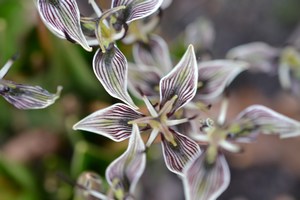 It is probably worth finishing with a description of our soil and the related problem of drainage. The underlying layer over the whole site is thick, impermeable clay. In many places it is over 3 ft down, and topped with a subsoil of sand and a top soil of sandy loam, pH 6.5. One could not reallyask for better. However, the clay layer undulates, coming closer to the surface in some areas. Along the eastern boundary the winter burn has cut through it and it is only covered by an inch or two of soil. In other areas, although not exposed, the undulations make these spots very slow to drain. This is further complicated by another feature that the locals call ‘Foxbench’. The sandy subsoil can form a thin but impermeable stratum of ‘proto-sandstone’. All this makes drainage our major challenge. We have responded in two ways, both relying on the fact that the active roots of most plants (even trees) are within a foot or so of the surface.

Firstly we have dug an interconnected network of open ditches, using plastic drainpipe to take them under paths, all draining down a gulley to the stream. I dug them 2 spade widths wide and 2 spade depths deep. In fact this was over-kill. The arboretum at the Blue Bell Nursery solved the same problem with ditches only 10 ins deep. However, I quite like our bigger ones. They don’t need clearing so often, they provide a great site for the spores of ferns to germinate, and once every three years I can harvest the leaf mould that has formed in them when I clear them out.

Secondly, wherever practical we raise our beds above the surrounding paths by about 6 ins and, if planting trees build small mounds for them. It is surprising how well this works. I enclose a picture of a bed of Stipa gigantea, which hates wet feet, quite happy in one of the wettest parts of our plot, simply because the bed is 4 ins above the level of the path. 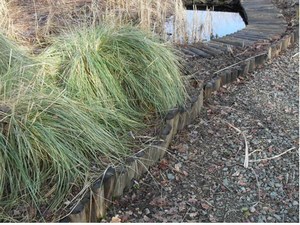 Stipa gigantea in a raised bed.