Until a week or so ago I had thought that this month’s blog would simply say ‘See last month’. Spring came to a grinding halt with the combination of the blanket of snow towards the end of March and the nightly hard frosts thereafter. Whilst Wendy had potting-on to do in the tunnels, the snow kept me in the house, getting more and more grumpy. Even once it had gone there was no question of returning to the planting, and I spent the beginning of April ‘harvesting’ leaves. In addition to the tree leaves that we missed collecting in autumn, our beech and hornbeam hedges start to shed in spring. So I spent time raking out all the leaf ‘reservoirs’ (corner eddies and under the hedges etc.) and adding them to the leaf pen. We have a large one (2x2x1.8 m) made of wooden uprights and chicken wire. The leaves spend a year in this, during which time the volume reduces to about one third. They are then transferred to a smaller pen for a second year after which they are reduced to leaf mould. You can never have too much leaf mould! Wendy uses it in her potting compost and I use it to improve soil, particularly in the shade areas.

The cold weather had also prevented any work in the vegetable garden, and it was not until mid April that I could start to plant seeds and seed potatoes. We also planted a new bed of asparagus. We have a bed which we put in when we moved into the house 15 years ago. It is still producing, but starting to look a little tired. The plan is that once the new bed is up to speed I will give the old one a few years rest to see if it will recover. 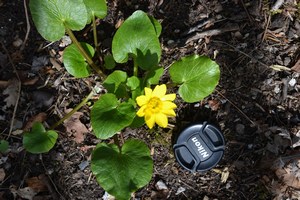 As I write this (20th April) spring is in full flow with many of the early plants, held back by the weather overlapping with the later flowering things that failed to notice the problem. One of the joys of spring is the celandines. I know that they are terrible thugs, but they are all gone by June, so I tolerate them. I had a period a few years ago of collecting named varieties. This was not too successful in that they seeded around themselves and soon the posh ones were out-competed by their less refined kids. I make three exceptions to this negative appraisal: firstly ‘Brazen Hussy’ is easy to manage... you just dig out all the seedlings with unsatisfactory leaf colour. Secondly the clone I have of Flore Pleno Group is truly sterile. It is later into flower than the other celandines and makes a good tight clump of fully double, palish yellow flowers. It is easy to propagate vegetatively. And thirdly subsp. chrysocephala which is much bigger than its cousins, looking more like a small marsh marigold. (I have included the lens cap in the photo to give you the scale). It does not self-seed as much as I would like, having only contributed about one new seedling a year over the three years that I have had it. 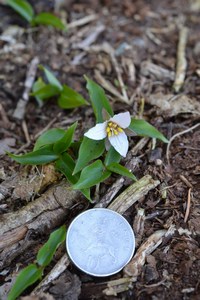 The trilliums are also starting to perform. I have a lasting memory of seeing drifts of them in the wild in Ontario in the late sixties, and have wanted to try to repeat this in the garden. So far I have failed. The only ones that really work well are the large deep-red flowered ones. These were grown from seed labelled as chloropetalum, but they may be kurabayashi. They are robust and vigorous. We also have a lovely miniature species, hibbersoni, which we were given by a friend (the coin in the picture is a 10p). However my many attempts to establish other species bought from nurseries have had very limited success. The plants are sold very small and take years to even start to look respectable. The worst experience was a group of 10 labelled as Trillium grandiflorum, ordered from a very famous nursery in Cornwall, that turned out to be mostly Fritillaria meleagris. Complaints were met with a complete denial of responsibility. Needless to say we do not use this company anymore. 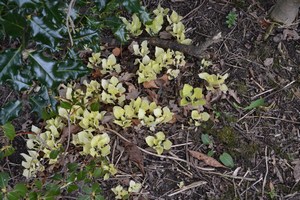 An excellent plant for spring is Silene fimbriata. We all know this for its interesting flowers in summer, but it is worth growing for the spring colour alone. The new growth is a bright acid yellow that glows out in the shade. 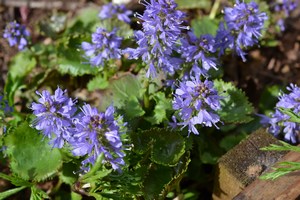 Finally a mention for Synthyris missurica. This charming little woodlander has been flowering for the last month in spite of the weather. It makes a cushion of neat, heart shaped, scalloped leaves to about 4 cms long and produces spikes of many tiny blue flowers. It is another plant that I wish would reproduce more aggressively. I think a carpet would be really impressive, but only have a few plants. Does anyone know how to speed up propagation?