We spent the week at the end of April/beginning of May in Cornwall, looking at gardens. I have decided that the Cornish ravine gardens are a form of horticultural masochism. You see all these wonderful half-hardy shrubs and trees but know that you can never grow them! I was particularly taken with Neopanax (formerly Pseudopanax) laetus. A small evergreen tree with glossy dark green leaves. It flowers early in the year and had already set immature berries in Caerhays where we saw it. It was available for purchase at the Duchy of Cornwall nursery, but it would not survive in North Wales.

We were impressed with Pinetum Lodge garden in St. Austell. Don’t be put off by the name. There is a pinetum, and very good it is too, but there is a lot more including an excellent shade garden with some interesting plants.

We returned to find our magnolias emerging into colour. We grow several, but the best is ‘Star Wars’. We bought this in 2000, more for the name. Our son, then a boy, was an avid fan of the films. However, it is a superb plant. In the 13 years since it has grown from a 4 ft stick into an 18 ft tree. It has been flowering for at least 9 years. It now covers itself in large pink flowers before the leaves in spring, and then gives a second, smaller show in late summer. If you have room for a large magnolia, put this one at the top of the list. 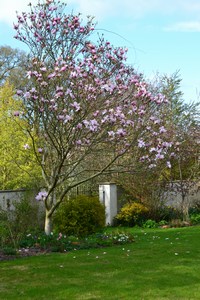 Magnolias remind me of the quince (Vranja), which is also coming into flowers. We bought it, naturally, for the fruit, but it is the flowers that make us keep it. There is only so much quince jelly and quince chutney that one can eat and attempts to make Dulce de Membrillo were a miserable failure, however as the flowers open they look like little magnolias. 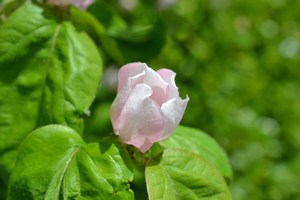 We also returned to germinated seeds. For Wendy these were desired plants needing pricking out and potting on. For me they were weeds needing to be pulled out. From April through September weeding is a more or less my full time job. It takes me about a month to make a full circuit of weeding our garden. I quite enjoy it. It gets you up close to your plants at different times of the year, and you learn a little more about them each time. It also generates a lot of useful compost. We have 12 compost bins each approximately 6 ft x 6 ft x 4.5 ft. We need so many because I am a lazy compost maker. I know that turning compost speeds up the process, but I have neither the time nor the energy to turn the amount of compost that we generate. We empty half the bins each winter, which means that the compost has a minimum of 12 months to rot down before we use it. Almost everything except ground elder and bind weed root goes in, including the summer hedge cuttings. This makes the resultant product a bit twiggy, but this is an advantage for use on the borders, and Wendy sieves it before using it in pots. I say almost, because we cannot use miscanthus trimmings. It is easy to see why it is used as a thatching reed in Asia! Even a thin layer prevents moisture getting through to the lower layers. If I turned it this would not be a problem… but life is too short. 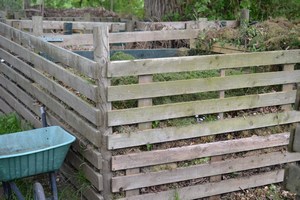 The epimediums are looking particularly good this year. I think they really enjoyed the rain last summer. I am addicted to epimediums. Over the past ten years or so I have been buying at least 6 a year and now have quite a good collection. I tend to divide them mentally into three groups. Those from Europe/Africa/west Asia and their hybrids are easy. Although they would rather have a good woodland soil and some summer moisture they will take what you give them including dry shade. Those from China are a little more fussy and must have some summer moisture and no winter waterlogging. But given any reasonable soil and site most will settle in well. Those from Japan and Korea (grandiflorum, its relatives and hybrids) I find to be even more fussy and had a lot of trouble getting them to thrive. However, I was lucky enough to meet a young Belgian horticulture student at an AGS conference who told me two secrets. Firstly the nurseries sell them as very small specimens, and they need to be bigger before they will get away outside. He suggested caring for newly purchased plants in their pots for a year before planting out. He also said that they prefer a slightly more acid soil than most of the others, and suggested incorporating some composted conifer needles in the planting hole. I have implemented both these recommendations and the improvement in vigour is striking.

I will not bother including photos of the epimedium flowers. I am not skilful enough to capture them. I think to really appreciate them you need to see them in 3 dimensions. However, they are grown as much for the leaves as for the flowers and so there is a photo of Epimedium sp. novo ex Yunnan showing its new growth. 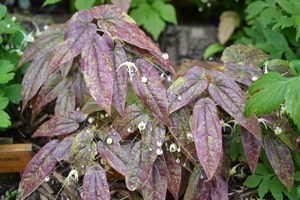 We have also started growing some from seed. This is quite easy as long as you keep three things in mind. Firstly, most are said to be self-sterile, and there are not many clones of any particular species in cultivation, so any seed that you get is almost certain to be a hybrid. To ensure some fertile seed make sure that you plant several different species/ hybrids close to each other. Secondly, I have noticed that the seed pods tend to fall off the plant and open when they hit the ground. The easiest way to collect seed is to lightly brush the stem with your open palm and collect any pods that fall off easily into your hand. Thirdly the seed should not be allowed to dry out before planting. In nature they fall to the ground and are immediately collected by ants who take them away to eat the lump at the end of the seed (elaiosome) and drop the seed into moist woodland soil in the process.

So, collect the seed, plant it as soon as possible and the seedlings will emerge in the following spring. I contribute epimedium seed to the seed distribution scheme, and do try to keep it from drying out before sending it on. It would be interesting to hear whether this is successful.