The weeding continues, but at least I have had a couple of days planting out to break the monotony. We had two sets of purchased plants: one, mail order from Mark Fillan. These included a climbing honeysuckle, Lonicera subaequalis which has pleasantly glaucous, elliptical, tapered foliage and yellow, tubular flowers in clusters backed by two semi-circular leaves (bracts?). Also a supposedly hardy schefflera (S. alpina). However this is quite a small plant and will spend next winter in the conservatory until it has more hardened wood. The second set was from our annual visit to Aberconwy Nursery. Two years ago we built a gravel garden and are still filling it with interesting alpines. However, I also bought some new woodlanders from them, including a Rhododendron campanulatum grown from seed collected in Nepal. In addition we had several plants that Wendy had grown from seed that needed a new home - mostly perennials from the seed distribution but also some vegetables that were ready to put out.

It is worth saying something about our arms race with the enemies of brassicas. About 35 years ago when we started growing veg our main problem was root fly. We started using chemicals, but soon decided that we did not fancy eating plants that had been in contact with the stuff. We then tried the little collars of carpet underlay, which worked well. However, having got the plants through that attack they seemed to become even more attractive to the birds. We started trying to scare them off with a lacery of string festooned with torn up plastic bags. It worked for a year or two but our feathered friends soon learned that they were not dangerous and started to walk in underneath. Our response was to cover the beds in plastic netting of the sort sold for protecting fruit. This kept them off very effectively, but now the plants seemed to be even more attractive to cabbage whites. I know insects are supposedly lower forms of life, but they soon learned to land on the netting and squeeze through the holes to lay their eggs on the plants. They were finally kept out using fine mesh insect-screen fabric. So our current scheme is firstly to lay weed suppressant fabric on the bed with slits cut for the plants. The beds are then straddled by bent lengths of polypropylene water tubing held in place with short pieces of bamboo cane (a Geoff Hamilton idea originally). This forms a framework for the insect screen. All our veg beds are 4 ft wide, so the tunnel is easy to re-erect following the normal crop rotation. The fabric is simply held down with old house bricks along the sides and ends. The scheme works well. The screening reduces wind, raises the temperature slightly and helps retain moisture as well as protecting the plants. The only disadvantage is that whitefly also like these conditions... and so the war continues. 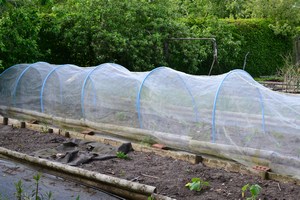 The garden is looking good. Plentiful moisture for the last 12 months means that the growth is lush and healthy looking. The stars at the moment are the flowering shrubs. The early flowering deutzias are smothered in blossom, and the weigelas and philadelphus are starting to flower. I like philadelphus and grow several species and varieties, but we are a bit too wet for them to really be at home. Still, most seem to cope. If I was restricted by some cruel deity to only one flowering shrub it would have to be Dipelta floribunda. I grow all three of the cultivated species (D. elegans for some unknown reason has never been brought into cultivation, even though photographs show it to look just as good). However, floribunda is the best of them. Ours is now a tall shrub of about 9 ft and is covered in pale pink trumpets with orange marked throats. These will be followed by little nutty fruits surrounded by their ‘shield shaped’ wings. It is not as common as it should be. Plants tend to be expensive to buy as it is quite difficult to propagate. Its cousins (D. ventricosa and D. yunnanensis) set reliably fertile seed, but that of floribunda is often empty, Cuttings root relatively easily but are hard to get through their first winter. I have also seen ventricosa miss-named as floribunda in quite respectable nurseries... so if you do want one, try to buy it in flower! 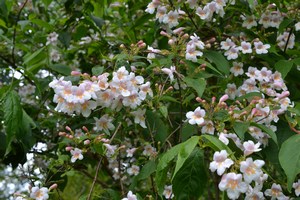 I know I said that I would not be saying much about planting combinations, but we have two that I think work well.

The first trick is one that we copied from a garden that we visited in County Durham. This is to plant Allium ‘Purple Sensation’ amongst hostas. The allium leaves emerge before the hostas, and get most of their photosynthesis over before the hostas are in full growth. Then the hosta leaves hide those of the allium just as they are starting to look tatty, The allium flowers then put themselves above the hosta leaves, looking for all the world as though they belonged to the hostas. Finally, just as the alliums need deadheading the hostas flower. It might not be great art but it is good horticulture! 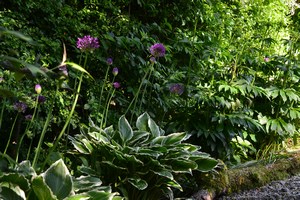 The second is one of those happy accidents that occur in gardens. We planted Rosa ‘Zephirine Drouhin’ at the corner of our house in 2001. However, it struggled and eventually we planted a Sambucus nigra ‘Thundercloud’ beside it and forgot about the rose. To our taste Thundercloud is the best of the dark leaved elderberries. The leaves are not so completely black as in ‘Black Beauty’ but I think that this is an advantage in that it makes the foliage look less artificial, and the flowers of Thundercloud are superb. This has grown to a large shrub of some 10 ft against the side of the house, and needs hacking back every now and then. The rose seems to have responded to the competition/protection of its neighbour and is now growing through the branches of the elderberry. Look at the photograph. 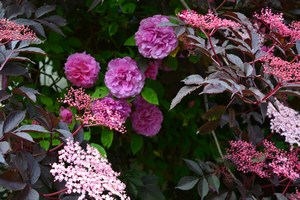