The flowering shrubs are doing really well this year. So well in fact that several of the deutzia and philadelphus have been so weighed down with blossom that they have flopped over the paths and had to have a premature pruning. The more mature areas of our garden are beginning to reach that phase where judicious removal replaces planting as the main activity. It is all very well reading that you should plant at the distance required by the mature specimen and have paths that are at least 2 people wide, but this leads to agoraphobia in the first five years of a garden’s life. We prefer to plant so that it does not look too empty at 2 years, looks superb at 10, but at 15, needs thinning. This happened last year to an area we call the Labyrinth. This is a patch approx. 30 x 30 m surrounded by a beech hedge and divided internally into a pattern of random straight paths. It is based on the garden at Coughton Court in Warwickshire which we greatly admired when we saw it many years ago. When we planted the area it was fairly open with the herbaceous stuff and the buddleias dominating. Gradually the shrubs and small trees grew and it acquired a pleasantly mysterious feel as you wandered round. Visitors quite easily lost their bearings. However, last summer we had to admit that it was just dark, gloomy and threatening, and so last winter I went in with the pruning saw! It was fairly easy to ‘thin’ as we planted it in a hurry and many of the plants were quite ordinary. Parting with them did not hurt much. However, I now notice that the area we call the tunnel field needs the same treatment, and there every plant is a treasure. There will be hard choices to make this winter! 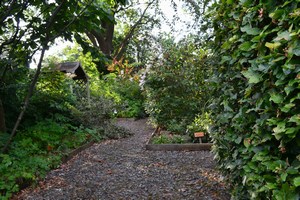 A part of the labyrinth

The cardiocrinums have been in flower since the middle of June, and are now most are finished. I can hear several of you shouting ‘Monocarpic Slug Bait’ at the very thought. It is true that they grow for 7 years, flower and then die, and also that most slugs find them second only to young ligularia in their gastronomic appeal, however we think that they are well worth the effort. We started with seed given to us by a friend on the Wirral, and after about 10 years we now have a stable population. The seed germinated very well and Wendy potted on about 50 of the seedlings. This enabled us to experiment in the best time to plant out. Anything younger than about 3 was eaten before it could grow, but from 3 years on they seemed to have sufficient resources to survive. We planted some out each year for the following four years. At this stage those planted first started to flower. From that point on we collected the offshoots from the base of each plant after it had died off, and potted these on to keep up the supply. We plant out about a dozen each year. The seed we were given was of C giganteum var yunnanense. These have a purplish flush to the stem and are seldom bigger than 2 m. This brings me to the picture. It must be a cuckoo (probably var. giganteum). To give you the scale, Wendy (the person standing beside it) is 5 ft 6 ins! 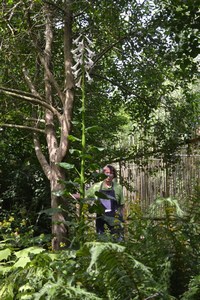 The first of the hydrangeas are in flower. I am a bit of an addict and am sure to bore you next month when the main flush starts, however it is worth mentioning a few of the early ones. The first to flower for us is always H. anomala ss petiolaris. I grow 3 or 4 varieties, but the best is the basic form. We grow it up the wall of our garden sheds, but also as path edging. We copied this idea from Dolwen garden near Llanrhaeadr-ym-Mochnant. It will try to spread out as ground cover but responds quite well to hard pruning and will make a short, thick shrub topped with the white flowers if you keep on top of it. Second are the various forms of H. heteromalla. Again I grow several, but in all honesty I do not think the differences are that vast. I am surprised that it is not grown more. It makes a tall shrub or small tree to about 10 ft depending on the variety and how it is pruned. It is not fussy about site and grows and flowers well in both sun and shade. It has large (12 in ) wide corymbs of creamy fertile flowers surrounded by large white sterile florets. After fertilisation these turn over and redden so that they are interesting even into autumn. They are hardy beasts, flower well regardless of the winter and don’t mind being hacked back if they get in the way. We have grown them easily from seed and I often find self-seeded ones near the parent plants. I usually contribute seed from one of the varieties to the seed distribution. With the exception of kirengeshoma in which they are quite big, the seeds of all members of the hydrangaceae are tiny, flattened and have a small membranous wing along one side, so don’t be put off if you order hydrangea seed and it looks like dust! 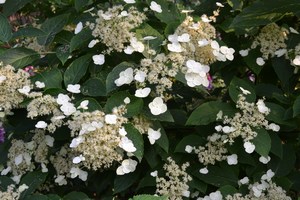 Carpenteria (also members of the hydrangaceae) are looking good at the moment. I include a photo of the variety ‘Elizabeth’ which has particularly big flowers. I also contribute seed from at least one of the varieties to the seed exchange, but we have never tried growing from seed ourselves. They need a well-drained site in sun and these are at a premium in our shady, wet plot. I have read that in the wild they germinate best following a wild fire. Perhaps they would respond to smoke treatment. I know you can buy a product developed by Kirstenbosch, but a few years ago there was an article in the ‘Hardy Plant’ by the late Peter Thompson saying that ‘Kipper Water’ worked (providing that they were really smoked kippers and not just 'smoke-flavoured') 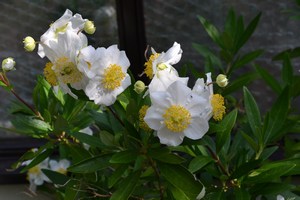 The weeding continues, but now most of the green matter being removed is spring flowering annuals. We grow carpets of forget-me–nots and also (not together) of a claytonia (probably sibirica) that is known locally as Shropshire weed. At this time of year they have set seed for next year and I remove the old plants before they start to look tatty. Gerald has completed the summer hedge cutting and is now working on ‘hay making’ ie cutting down the long grass in the wilder areas of the garden. Wendy continues the on-going job of propagation. It is the season for soft wood cuttings and there are several hydrangeas of which we want back-up plants.

I’ll end with a major milestone! In 2005 I bought Carriera calycina from a sale at Ness Gardens. You used to be able to buy some interesting plants at Ness. I think they trained the horticultural students in propagation using some of their rarer plants. Unfortunately the plant sales are now just like any other garden centre. 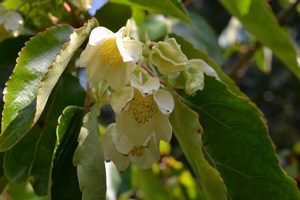 Had I read Bean’s account I may not have bothered. He says that it is very beautiful, but unreliable being given to suddenly dying for no apparent reason. I planted it out in a reasonably sheltered part of the wilder area of the garden, in fact surrounded by wild raspberries. We recently developed this area and found it still alive and grown to about 8 ft. (It should make a tree of 30 ft if it lives). This month it has flowered for the first time. I enclose a photo. I don’t know whether this means it is happy or that it is making an attempt at reproduction before dying off... But to see it in flower is an occasion!