Many people find August in the garden a bit dull. I think it is because they do not grow enough hydrangeas! The genus suffers from three factors that make it less popular than it should be. Firstly there are so many, almost indistinguishable varieties, that those that are truly distinctive get lost in the morass. Secondly the flower colour of H.macrophylla and H. serrata depend on the availability of free aluminium ion to the flower bud, and can be a bit of a movable feast until the plant’s roots are well settled. This is well demonstrated by the three photos below which show the same plant of H. macrophylla ‘Nigra’ after 1, 2 and 3 years in the ground here at ph 6.5. Finally and more importantly, the garden centres don’t sell the best ones. In most garden centres and nurseries you will find mainly varieties of H. macrophylla. This species comes from the coastal areas of Japan, and if you can reproduce the mild winters and moist summers of its home land (as they can along the western fringes of the UK) then it will be stunning. The valley gardens of Cornwall in summer come to mind. However, it has evolved in an area where late spring frosts are rare, and it tends to break bud at the first rise in temperature after the winter cold spell. This means that it suffers greatly from late frosts, and in bad springs it can lose all its top growth. It will grow again from the root, but unless there is a long hot summer to ripen the wood, you can get into a viscous circle where it loses the top growth every year and, as it flowers from buds on year-old wood you never see any blooms. A far better choice is H. serrata. This also comes from Japan, but from the mountains, where late frosts are common. It does not break bud until warmer conditions last a while. I also think they are much better garden plants. They tend to be smaller, more delicate and many have the advantage of having bronzed leaves and excellent autumn colour. 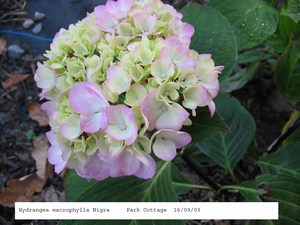 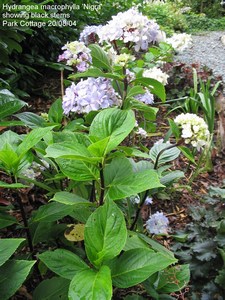 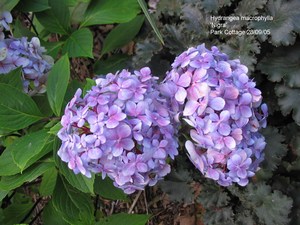 H. paniculata and H. arborescens varieties are also fool proof as they flower on the current year’s wood. H. aspera and H. involucrata varieties are frost sensitive, but usually have enough resources to put up with a bad frost and still bud again from the old wood.

Anyway, I should stop there. I can bore for Britain on the subject of hydrangea. Below are photos of H. serrata ‘Blue Billow’ which is surprisingly hard to buy, and one of the few really distinctive paniculata varieties, ‘Great Star’. 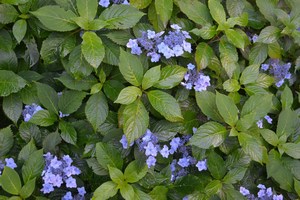 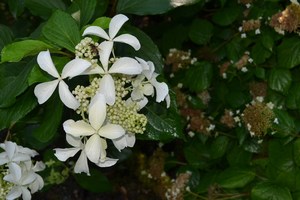 The other summer flowering shrubs are also looking good. I used to grow many varieties of Hoheria and Eucryphia. The extremely cold winter of 2010/11 applied some ‘selective pressure’. All the hoheria were cut to the ground and only H. sexstylosa ‘Star Dust’, H. ‘Glory of Amlwch’ and H. angustifolia grew back. The first two of these flowered again this year and I think all three will soon be back to their former glory. There was a similar sifting of the eucryphia. E. glutinosa was unharmed, E. x intermedia ‘Rostrevor’, E. x nymensensis ‘Nymensay’, E. ‘George Graham ‘ and E. lucida ‘Ballerina’ lost a few branches but quickly recovered. E. x nymensensis ‘Mount Usher’ was cut to the ground, but is re-growing. All others, including cordifolia, and basic lucida were lost! Perhaps Tennyson was really thinking of gardening when he wrote ‘It is better to have loved and lost....’

The shade gardens are looking quite lush, with podophylla and arisaema providing good leaf shapes. I grow Ligularia japonica and Senecio cannabinifolius in shade. They are big plants; the dissected foliage of both is very impressive and the yellow flowers are welcome in August. The berried plants are starting to come into their own. The bright red of Actaea rubra looks good. I also like the shiny black of A. asiatica and the doll’s eyes of A. pachypoda. You don’t see Triosteum species grown much, but the white berries of T. himalayanum and T. pinnatifidum make a bold show in shade (see photo). T. erythrocarpum, as the name suggests has brownish red berries that do not show up so well, but on the way to red it can pass through a pink stage that looks quite good. 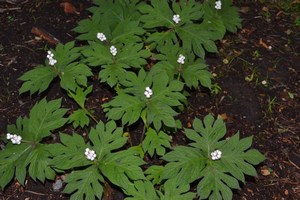 I think the star of the late perennials is Kirengeshoma, and they are just coming into flower. They prefer a moist soil, with some protection from the mid-day sun, but if the ground is reliably moist they will even cope with this. You need several to have a good show, and they can be a bit pricey. They grow easily from seed, but as they flower late, they are often cut down by the frosts before the seed ripens. Our solution is to take cuttings. Wendy tells me that these root easily if taken as soon as they are firm in early summer. So, buy one plant and propagate to get a good sweep of these lovely plants. The other herbaceous members of the hydrangea family (Deinanthe and Cardiandra) can be also be increased in this way. Deinanthe grow well for me in the shade gardens. D. bifida is the more vigorous and D. caerulea the more attractive. Luckily there is a hybrid (often sold as a pale form of D. caerulea) that combines both traits. I am not so successful with Cardiandra. They do not die, but they do not thrive, and there seems to be very little written on their cultivation. If anyone has any tips I would be grateful to hear them.

On the 17th we had a visit from our local HPS group. It consisted of a plant sale (for group funds), a ‘bring and share’ lunch and a view of the garden. They arrived at 1.00pm after visiting another garden in the area. I think it a fair illustration of the priorities of a hardy planter that this was the order in which the day proceeded. In spite of rumbling stomachs, the plant sale was the first point of call, then satisfy the hunger and then the hike out into the garden! The threatening Atlantic low meant a dull day, but there was very little actual rain so they could navigate our narrow, overgrown paths without getting soaked. I noticed another common trait amongst our members. When viewing a garden they mostly look downwards. I am afraid that every dandelion and nettle was seen, but I wonder how many noticed the red fruits of Dipteronia sinensis or the flowers of Fraxinus ornus?