Last Month in My Garden: September 2013

September is when the grasses start to come into their own. We have two areas of our garden devoted mainly to grasses. The ‘Grass Garden’ itself is an area enclosed by a semi-circular pergola and full of summer growing grasses including several large miscanthus varieties. Wendy and I spent 5 years in Nigeria when we were younger and we loved the huge groves of bamboo that grow there, their arching stems dwarfing humans to the scale of mice. One of the objectives of the grass garden was to give a similar feeling, but necessarily on a smaller scale. In the autumn you have to force your way in among the stems which arch above.

The second area is one we call the ‘chain link field’. We had originally wanted a wild flower meadow in this space, but the soil is too rich and the whole area too wet. We decided instead to build a series of ponds where the soil was wettest, and around these is a group of beds with different grasses and vigorous perennials. The picture shows two of these. The bed on the left is mainly miscanthus, that on the right Stipa gigantea. 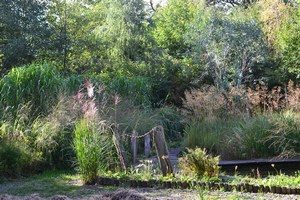 Grasses in the chain link field

The end of August and the beginning of September is also the season for Clethra. We started with a couple of varieties of C. alnifolia about 14 years ago, attracted by late flowering, scented shrubs that were promised to thrive in our over-moist soil. We now have a National Collection. It is a very big genus, but most members are from the tropics and subtropics, and hence impossible for us. We limit ourselves mainly to the hardy species or those on the borderline of hardiness. From a horticultural (not botanical) point of view I divide them into 4 groups. Firstly the North Americans. Here are three closely related species, acuminata , tomentosa and alnifolia. Of these alnifolia is the most common, and there are many different varieties available. They are all relatively easy in any non-alkaline soil that does not dry out in summer. They prefer light shade, but will survive in less light even if they do not flower quite as well. There are both pink and white flowered forms most growing to about 5 ft, but there is also a useful dwarf variety, Humming Bird, that deserves a spot even in the smallest garden. Secondly the East Asians. There are three basic species: fargesii which is very similar to C. alnifolia, and it is suspected that many plants in the trade sold as fargesii are in fact alnifolia; barbinervis which makes a large shrub to about 8 ft, with glossy leaves; and delavayi and its relatives. This group of plants comes from a large range from the Himalayas to eastern China, and in that range has forms which used to be counted as separate species. The three I have (delavayi, cavaleriei and monostachya) are all small trees, but with quite different growth habits. All make a lovely addition to a woodland garden, and monostachya in particular has good autumn colour as well as the lovely scented flowers common to the genus. Most of the Asians flower a little earlier than their American cousins. 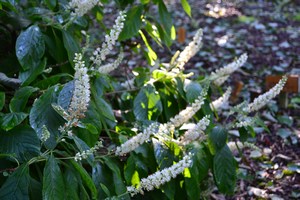 Thirdly one isolated species: C. arborea, from Maderia. This is a beautiful evergreen tree with long racemes of lily of the valley scented flowers. Unfortunately it is not fully hardy and ours spend the winter in our conservatory. Finally there are the Mexicans. These are species from the mountains in Mexico, relatively new to cultivation and of untried hardiness in the UK. The most common of these, C. pringlei, is evergreen if kept frost free, but does quite well outside as a large deciduous shrub. The other two (mexicana and luzmariae ) are very new to cultivation. Ours are growing well in pots and the plan is to keep them over winter in the conservatory until they are large and well wooded (and until we have established cuttings as back-up). Then we will trial them in a sheltered part of the garden. 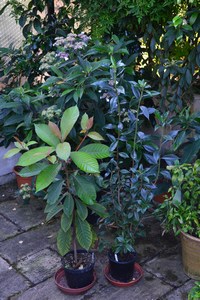 Clethra mexicana on the left and Clethra luzmariae on the right

Enough about Clethra. For me the main stars in September are the berrying plants. I talked about actaea and triosteum last month (see the erratum below). These are now joined by the arum, arisaema, aralia and phytolacca in the shade and by the sorbus, cotoneaster, viburnum and malus in the sun. It has been a superb year for sorbus. We grow a lot, many from seed. Several of the more showy species including the three described below are apomictic, which means that the seeds are produced without fertilisation and so seedlings are genetically identical to the parent. You know what you will get. Sorbus are probably the most rewarding trees to grow from seed. They germinate well, grow quickly, and flower and berry quite early in their lives. They also come in a satisfying range of sizes. There are several miniatures of which S. reducta is the best known and seldom bigger than 2 ft. S. fructicosa is a lovely arching small shrub to about 5 ft, with glossy divided leaves and masses of large white berries. Of the small trees casmiriana is popular but can be short lived in good soil. It prefers a hard life. Finally there are the larger trees. We have a particularly nice one grown from seed picked up off the ground in Ness Gardens. It is obviously a hybrid from sexual parents, but welcome none the less. 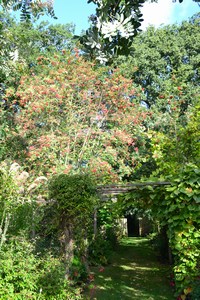 My regular round of weeding broke down in mid-August and I started work on one of our winter projects, finishing the development of the large shade garden that I have described before. At the moment this mainly involves wheel-barrowing compost and the contents of our ditches and spreading it over an area of 12 m by 4 m. The rest of the time is spent tidying beds and working on the seed distribution. I am glad to say that seed is already arriving, and I am managing to collect quite a lot myself, so I have hopes that there will be a better selection for members this year than last. Please keep it coming in!

I’d like to take the opportunity to make a point about seed formation in the asteraceae. These composite flower heads produce masses of what seems to be seed, but in fact only a small portion of it is viable. As an example look at the photos below of the material produced by Ligularia japonica and the proportion of this that is actually seed. Why the plants waste the energy on producing so much dross is not clear. Perhaps it is to discourage birds from eating the real seeds. A beak full of fluff is probably enough to make them look for a meal elsewhere! However, it can present us with a real problem in the seed distribution. We do not have time to clean the seed ourselves, so please try to remove as much of the waste as you can before sending it in. The problem is particularly acute with Cirsium, Knautia, Ligularia, Aster, Erigeron, in fact anything that looks like a daisy! 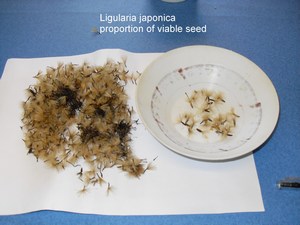 Erratum. Last month I described Triosteum himalayanum as having white berries. This is because the plant that I was sold under that name has white berries. However, it has been pointed out to me that himalayanum should have red berries. I should have checked more thoroughly as the (quite famous) nursery that sold it to me had also sold me three other miss-labelled plants in the same (and last) order I had from them. It is doubly embarrassing as I have contributed seed from this plant to the seed distribution in the last two years. So, if you are growing plants labeled Triosteum himalayanum from the HPS seed distribution, please re-label them as T. pinnatifidum and enjoy the white berries!! I am pleased to say that this year a donor is sending seed of the correct plant and I for one will be growing it.