Last Month in My Garden: October 2013

I am writing the blog a little earlier this month. Wendy and I spend almost all of the last 10 days of October and the first five of November on the seed exchange and it is better to get this out of the way before the rush starts. It may seem like a lot of work but we get one very big perk. We select our 30 options as the seed comes in and sow it fresh. Wendy has a system. She makes up plenty of compost. This consists of 3 parts by volume of multipurpose, 2 parts of John Innes No. 1 (or Seed) and 1 part of an equal mix of course grit, fine grit and perlite. This is sieved through a 1 cm sieve and is ready to go. When required it is put into 2.5 in square pots and soaked from beneath in a tray of water and then drained. The seed is sown in this, covered with the same mix of grits as above and then the grit is treated with a strongish pink coloured solution of potassium permanganate to discourage mosses and liverworts. The pots (with their label) are put into an unheated propagator with lid (vents open) that has a sheet of capillary matting on the bottom which is kept moist. The whole thing is kept in an unheated tunnel over winter (in fact they can spend up to 3 or 4 years in this propagator... don’t be impatient with your seeds!) Obviously this is only a good all-purpose procedure. Particularly fussy seed may need individual attention, however our results are usually quite good. 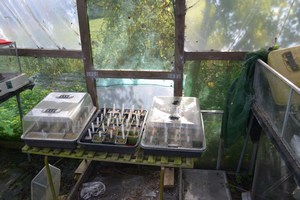 The garden has the look of melting wax as it slips into autumn. I have not weeded or dead-headed for a month now and leaves are beginning to lose turgor, yellow and flop into decay. We try to leave the herbaceous stuff standing well into the new-year to give the insects a chance. What we have been doing is spreading compost and leaf mould as we make room for the harvest of dead leaves that is just beginning to start. In my more philosophic moments I realise that gardening is really just about moving stuff from one place to another: weeds to the compost bin, compost to the borders, leaves to the leaf bins, leaf mould to the borders, soil from the ditches, cut branches to the shredder, shreddings to the borders etc. etc.

The autumn colour has been in progress for about a month. The first tree to colour up every year is a Cercidiphyllum japonicum that we bought from Pan-Global plants when they used to be in Painswick. It was seed grown. It has developed into a nice tree with the good habit of starting to turn red at the end of August. It is brilliant in red and purple in September, and by now has lost its leaves. We have two other clones. One was bought specifically for the smell of the dying leaves. Wendy really likes the burnt sugar smell, and the Painswick clone is not very strong, so we went around all the local nurseries in autumn a few years ago and bought the individual with the strongest scent. It is only just beginning to colour up. Our third clone is the variety ‘Tidal Wave’. This is a weeping form with slightly glaucous leaves. It was what we call a ‘rescue plant’. It was looking forlorn and ill-treated in a January sale a few years ago so we offered it a home. The autumn colour of this variety is nothing special.

Liquidambars also vary quite a lot in their time of leaf colour. ‘Worplesdon’ is the first for us and is in its full glory now. We have several others, both unnamed and named cultivars of styraciflua and also the species acalycina (a lovely thing if a bit prone to wind damage) that colour through the season. One grown from a pre-germinated seed from Northfield many years ago, holds onto its leaves until Christmas. 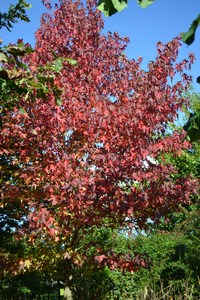 The big disappointment this autumn has been the aronias. We have the national collection, and usually they are glorious in autumn, but this year they seem to be dropping their leaves as soon as they colour up.

It has been a reasonable fruit year. No apricots or greengages to speak of, but the Victoria plums and the damsons have been good. Only one pear produced (we are a bit too far north for good pears I think). This was ‘Beth’. It is an excellent variety for a northern garden. It crops every year, producing many, smallish, butter yellow pears that are sweet and tasty. They do not store, but for two to three weeks you can stuff yourself with them. Very enjoyable! The apples have been good and we now have sufficient stored away for the rest of the year. The best performers for us are ‘King of Pippins’ and ‘Sungold’ as eaters and ‘Bounty’, ‘Howgate Wonder’ and ‘Bramley’ as cookers. These three make a good set of cooking apples. Bounty ripens a little earlier than the others. It has an excellent, sweet flavour and lasts into November. Howgate Wonder then comes into play. It has a good intense apple flavour, and stores into January. Bramley is the poorest of the three for flavour (but still good), however it stores well into early spring.

We are also harvesting tomatoes. The cold spring really slowed them down, and we have had to pick many before they are ripe and bring them into the house to ripen. This works quite well and we tend to have our own, fresh tomatoes well into November. The excess is bottled (Mrs Beeton’s recipe for ‘Tomatoes in their Own Juice’). This is a bit of a pain, and certainly more expensive than buying tinned tomatoes, but the bottled ones give a much fresher flavour to sauces than tinned.

My main project this winter is to bring some light back into overgrown areas. This involves lowering the height of many of our hedges, raising the crown and trimming some of the small trees and removing a few of them altogether. The process has started and it is generating fire wood for next year and a lot of material for shredding. This has become Gerald’s main job, at least until it is time to trim the hedges.

The naked ladies have almost finished their show, having reached the floppy stage, but the Guernsey lilies are in full flower. We were lucky in being given huge clumps of both by friends soon after moving here and we now have enough to have a real show rather than a few isolated stars. This has put me off trying other varieties of either of these genera. To make a show you would have to have at least a dozen, and they are just too expensive for this. I’ll end with the final mention of hydrangeas for the year! The paniculatas are the best at the moment. There are a few late varieties, such as ‘October Bride’, that are still a good white, and these are complemented by those that colour well as they age. ‘Vanilla Fraise’ is a good modern variety that goes the colour of the ‘juice’ that used to be put on soft ice cream cones, however my favourite is ‘Burgundy Lace’ which does have a good deep, red wine colour. The ones I have chosen to photograph for you are both new to me, and still very young. In Japan there are many named varieties of H. involucrata, and some of these are beginning to be available here. I bought a few a couple of years ago, but most failed to survive their first winter. This was surprising as the more common cultivars, ‘Hortensis’, ‘Plena’ and ‘Sterilis’ do well for me. Perhaps they need to be bigger, more well-established plants before planting out. Anyway, one survived and flowered this year. It is ‘Yohraku-tama’ and encourages me to keep trying. The second choice is a new cultivar of H. apera called ‘Hot Chocolate’. I bought it last year for the dark leaves with chocolate brown backs. It came through the winter and even though quite small, flowered this year. The flowers are unique amongst asperas in having really clear pink sterile florets. If it continues to grow well it is going to be a real star. 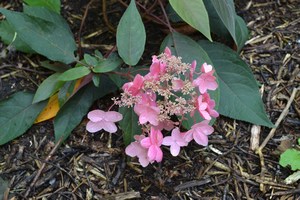 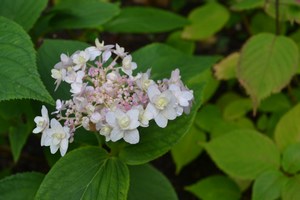