Last Month in My Garden: December 2013

We escaped the worst of the bad winds that battered the east of the country early in the month. There were plenty of small branches brought down from our mature trees, but this is just natural pruning. Our major loss was a fallen rose pillar. This is in an area that we call the rose alley that leads from the front garden down to our large, natural pond. The area is long and skinny, situated between the western boundary conifer hedge and the wall that surrounds the area close to the house. It was one of the first bits that we planted. The western side is a shade garden under some mature birch trees. The eastern side has hydrangeas (mostly quercifolia) grown back against the wall. The central strip is grass, and to either side of this we constructed two lines of 4 large tripods made from half rounds, which we clothed in Rosa ‘Saunders White’. It is one of these that has collapsed. Although it was treated timber it is obvious that it has started to rot at soil level. The one that has gone is nearest to the pond, so I assume that the soggy soil is to blame. We have decided just to remove it. This will leave 4 pillars on one side and 3 on the other, but I suppose it is only a matter of time before the others start to go. 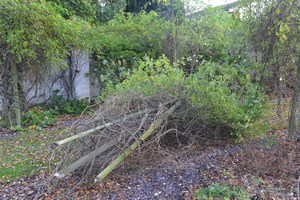 The wind has at least brought down the last of the leaves. Wendy has started raking and I spent a day or so removing them, together with the other dead material, from our rockeries and gravel garden. It is only when you get down to it that you realise how much material can collect in the nooks and crannies of a rockery.

Wendy has been doing a similar ‘hygiene’ job for the young plants in the greenhouse and the tunnels. At this time of year she removes the fallen leaves and spent growth from the young plants to prevent rot over the winter. She also ‘roughs-up’ the soil on the top of the pots with an old kitchen fork to help increase aeration and inhibit moss growth. Amongst the plants are about half a dozen Vancouveria hexandra from seed sent to the seed exchange last year by a donor from Seattle. It is a close relative of Epimedium, from the west coast of the USA. It spreads nicely in shade with three-lobed leaflets and leafless stems of drooping white flowers. I have grown it for 17 years but have never had seed. I assume that it is because I have only one clone and it is not self-fertile. I will plant my half dozen new seedlings together and hope that they start to breed.

Gerald has been busy with some ‘tree work’. One to be removed is a variegated sycamore that was here when we bought the house. It made an attractive, well behaved small tree for about 8 years. Then it started to grow branches that had reverted to the plain green form. We tried to cut these out, but then they grew too high in the crown for us to reach safely. Over the last two years all the variegated leaves have been dropped in early August, leaving a very odd looking thing. It has to come down. Another job for him is the taming of the Sea Buckthorn. We bought a few bare rooted plants along with our native hedging mix in our first year in the house. We planted them 3 yards in from this new hedge in the wilder part of the garden. The concept was to produce lots of attractive orange berries for us to see and the birds to eat. They all turned out to be males! We have since bought a plant of the female variety ‘Hergo’ and planted it close to the others, so we do get a few berries. However the boys have grown apace, both in height and by suckering freely in the moist soil. The patch looks quite attractive. There is one problem. As they get taller the stems start to lean over the paths. At first this was attractive, but the bigger and heavier they got the more they leaned so that three of them were blocking our path and beginning to threaten the public foot path on the other side of the hedge. They had to come down. Plenty of interesting firewood for next year!

The garden is looking very Decemberish with lots of fallen leaves and dead vegetation. The variegated shrubs are doing their best to brighten things up. Some people are a bit sniffy about variegated plants. I am not one of them, although there are a few forms of variegation that look more like an infectious illness that an attractive feature. I am reminded of Farfugium japonicum ‘Aureomaculatum’. The basic form of this ligularia relative makes a good foliage plant for shade, with bold heart shaped, dark green leaves, but in this particular variety these are covered with yellow spots that look like a weird plant form of measles. However, in general, variegation adds interest, particularly at this dull time of year. The workhorse plants are the many forms of Holly, Ivy and Euonymus. We have a particularly fine plant of Euonymus fortunei ‘Variegatus’. This was planted at the foot of a flowering cherry to make a small shrub. It escaped into the tree and now makes an excellent climber, mostly hidden when the tree is in leaf, but looking good at this time of year. 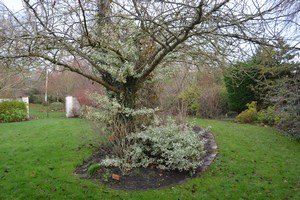 A less common but good variegated large shrub for a sheltered spot is Aristotelia chilensis ‘Variegata’. This plant had grown into a small tree before the cold winter of 3 years ago which cut it to the ground, but it has grown back from the base and is now about 8ft high. 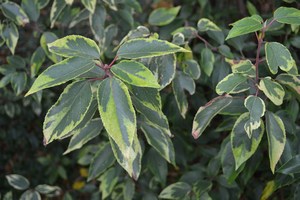 I have been collecting some of the late-ripening seeds for storage until next year’s seed distribution. Several genera ripen their seeds between late November and early January. These include Rhododendron and some other ericaceae, Clethra, Hydrangea, Deutzia, some Philadelphus, Weigela and Diervilla. Although covering several unrelated plant families, these all share the feature of producing very tiny seeds. Some are shown in the picture. Starting with the largest at 5 o’clock and going clockwise these are: Hydrangea paniculata, Hydrangea serrata, Menziesia ciliicalyx, Diervilla sessilifolia, Rhododendron yakusianum and Hydrangea heteromalla. To give the scale, the ‘metal rod’ is a fine sewing needle. They are all relatively easy to collect. You wait until the first of the seed pods start to open, and then collect full pods and bring them into a warm, dry room. Over the next few weeks the pods will open and usually the seed will fall out quite easily. Sometimes the seed refuses to fall out and the pods have to be cracked open. I use a mortar and pestle for this but a toffee hammer and a shallow bowl would work. It is easy to separate large pieces of seed pod with a kitchen sieve, but it is very difficult to remove dust and fine stuff from the seeds. Often the result may be as much as 50% dust, but this is no real problem, a pinch of the stuff will still contain enough seed to grow a small forest! 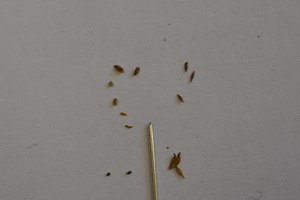 Rhododendrons can be rewarding to grow from seed, but they are promiscuous, and garden seed is likely to produce hybrids. We use the method described by the late Peter Thompson in ‘Creative Propagation’. The seed is sown very thinly onto a topping of a finely sieved mix of equal parts peat and fine grit over a lime-free potting mix. You then cover or place in a sealed plastic bag and keep them in a cool shady place (below 15°C). Prick out when the 3rd or 4th true leaf is formed. Growth is slow at this stage. You can use dilute permanganate as discussed last month to prevent liverwort growth. We have often had lots of losses of young plants, but germination is usually good enough that plenty survive. You need to be patient. The first flowers may take 5 or more years. However we now have 10 year old seed grown plants that are 6 ft tall and flowering well. Yes, you could buy similar plants at the garden centre, but it is not the same!