Last Month in My Garden: January 2014

Whilst I am grateful for the relatively mild winter so far it presents its own problems. It has been so warm that many of the shrubs and herbaceous plants are beginning to swell buds and push through shoots. We even have one Helleborus x hybridus in flower, long before I would normally be clearing off the old foliage. The problem is that, if spring is going to be very early, then I must hurry up and cut down last year’s dead stuff, but this risks exposing all the tender, swelling shoots to the worst of the frost if and when it turns cold. Furthermore, all the rain makes it difficult to get into the beds without risking compacting the soil. The decision has been delayed a little because we are spending a few days working with the other members of our local group on picking out the orders for the seed distribution. This is ‘Assembly Line’ work, repetitive, but requiring attention to detail. However, the frequent breaks make it quite a sociable exercise.

Gerald has started to clear the grass gardens. This generates a lot of material which we will eventually burn off, but it is all too soggy at the moment.

There is not much to see in the garden. A few winter flowering shrubs are trying to cheer us up. I have a good form of Viburnum farreri in the front garden that was here when we bought the house. It is covered with pink, scented blossom at the moment. I have several forms of V. x bodnantense (a hybrid between farreri and grandiflorum) but for us the simple species does best. This may be as much a matter of site and age of the plants as it is about their genes! 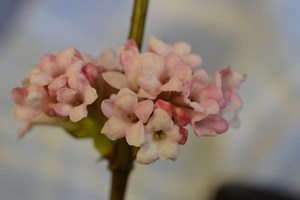 The winter flowering honeysuckles are also contributing. We grow three: L. standishii, L. fragrantissima and L. x purpusii. They are really very similar, all with whitish, highly scented flowers. The flowering branches can be cut whilst they are still in bud and brought into the house to open. They are a bit messy when the flowers drop, but the scent is worth it.

The bright yellow of Jasminum nudiflorum is very cheering. This used to be very common, but you do not see it as much these days. It is true that it only performs for the winter months, but it fades nicely into the background for the rest of the year. I grow it over an old arbour together with two chaenomeles and J. beesianum, so that I get flowers in winter, spring and summer.

It is also worth mentioning Pinus sylvestris ‘Aurea’. We were given this as a small (12 in) plant in 2008. It is now about 6 ft; eventually it is supposed to get to 30 ft. During most of the year it is simply a nice, green pine but in the winter the needles turn a golden colour. They do not drop off at this stage, most flush green again as the weather warms. It makes a good specimen for a bed concentrating on winter colour. I assume that the gold colour results from the plant not making chlorophyll during the winter. This made me realise that I know very little about the adaptive compromises between being evergreen such as the normal scots pine, being deciduous as in the larches and hanging on to the leaves but shutting them down for the winter as in the case of this odd variety. 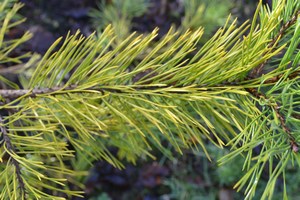 My personal post-Christmas treat is to order new (to me) shade plants from Edrom Nurseries. The order arrived mid-month. Mostly ‘little pots of hope’ i.e. pots with no greenery yet showing, but a new asarum (A. ‘Takasago-Saisin’) is in leaf. I like the genus, but there seems to be an unwritten rule that the more visually attractive the leaf is to us then the more gastronomically attractive it is to slugs. Thus the plain, bright green leaves of A caudatum spread well in moist shade with little predation showing. Similarly A. europaeum and A. canadense survive well, but I have lost many other, prettier species to gastropods. I particularly regret losing a well-marked form of A. hartwegii, which had lovely ‘silver wire’ lines over the dark green leaves. Slug pellets don’t seem to help much. Nematodes give relief when they work, but I find it impossible to keep them alive and active long enough to be a practical solution. Any suggestions? 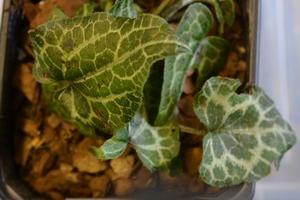 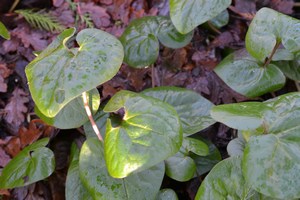 As your seed orders will be arriving in the not too distant future, I thought you would be interested in the report below written by a seed donor and HPS member, Stefanie Bowman. Wendy and I have not tried the method, but it certainly looks interesting.

I started sowing seeds in 2006 and gradually became hooked. I tried sewing in bags after reading an HPS article some time afterwards that involved leaving the bags outside but it did not work for me. In the 2012 Autumn Cornucopia there was an article by Ann and Bob Armstrong on the same subject which I decided to try myself this year. My sister had died early last year and so seeds received from the RHS and HPS were virtually untouched and I now had yet more from the same sources this year, as well as seeds left over from years ago, about 200 packets altogether. I wanted very much to give them all a chance to germinate using Ann & Bob’s experience. A comparison of the methods used is below.

The success rate was much higher than I expected, probably as high as Ann & Bob’s. Brassicas, peas and lettuce were particularly successful, the first two often having well developed and enormous roots. Germinations were far quicker than I anticipated – 6 days being Ann and Bobs record and mine being 5 for mizuna. Germinations included 2007 seeds as well as many in more recent years up to 2012. Some germinations were from seeds that I had tried to grow unsuccessfully in more conventional ways before. Annuals, perennials, trees and bushes germinated.

About 50% of exceedingly tiny seedlings did not survive and, in some cases, none survived at all. This was probably because they were extremely difficult to handle without damaging them. When I try again I will therefore try to keep closer to Ann & Bob’s method where there seems to be less handling. I also found that I lost seedlings if they were de-bagged whilst their leaves were still only half out of their seed case.

Using sandwich bags and emptying them in water usually meant that none of the root system was broken off, which can be the case taking seedlings from bags individually or pricking them out from compost. Intertwined seedlings in water can fairly easily be separated, if carefully done. This was the case with at least 50 germinated sunflowers, all intertwined, from 1 bag!

Where germinations were unsuccessful, I emptied the bags in the garden, on the surface of a pot already planted up or just mixed the contents with ready prepared compost for seedlings. I have always done the latter with compost used for unsuccessful sowings and subsequently had pleasant surprises when an unrecognisable stranger pops up.