Last Month in My Garden: February 2014

Like everyone else we are fed up with the constant wind and rain. Hibernation seems such a good system! We were caught by the high winds in the second week in February, but had nowhere near as much damage as many people. We lost a small eucalyptus and one stem of a Robinia x margaretta ‘Pink Cascade’ . There were lots of broken branches, particularly from the aptly named ‘crack-willow’. We also lost three ‘structures’. Firstly a piece of trellising at the front which used to hold Jasminum officinale ‘Devon Cream’, however the plant had died in the winter of 2010-11 and had not been replaced. Secondly, a very old rustic arch which was already rickety when we bought the house. It held up Rosa ‘Leverkusen’. We have had this since 2001 when we asked the people in C.K. Jones’s nursery near Chester to recommend a disease-resistant yellow climbing rose for part shade. It has fully met the brief. Now we have to find it a new support. And thirdly one of a set of four arches which line the main path in the vegetable garden. Each of these has a species of actinidia growing over it. The one we have lost was clothed with A. polygama. Wendy has carefully disengaged this from its former support and now we must find some other way to keep it up. This is fairly urgent as this plant is feline heroin and if we don’t get it up and out of reach before it comes into leaf the local cats will shred it in feeding their habit. In addition to a couple self-fertile varieties of A. deliciosa (neither of which has ever fruited) I grow four different species of actinidia. I had looked forward to trying to breed hybrids, but all my plants are male. The odds against this happening by accident are 16:1. This indicates that most of the plants in the trade are male. I wonder why? 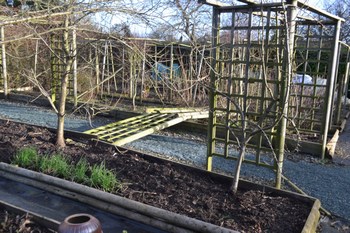 The garden is very soggy, but the ditches are working well and there is little standing water. I have had to start the late winter clearing of the borders in spite of the wet. This is usually quite satisfying as you do notice the difference before and after. It also makes you re-evaluate some of the borders and there are a couple in the labyrinth that are past their sell-by date. One was planted in campanula species and the other in orange, red and yellow perennials. In both cases the thugs have out-competed the more choice plants and it is time to start again. We will poison off what is there this year and replant next year.

‘Weed of the Winter’ this year is moss. It is covering almost every available surface, paths in particular. We have had to accept the fact that our paths need some serious attention. They were originally made with crush and run hard core laid over polythene sheet. This has worked well, but it has been attacked from two sides. Firstly the annual leaf clearing removes some stone each time and secondly the plant kingdom constantly tries to reclaim the space. I am reminded of videos of plants colonising new volcanic slopes, but on a much smaller scale. The assault is led by the mosses and supported by escaped leaves turning to leaf mould. Over the years they have built up a ‘proto soil’ which is now mushy and a home for weeds. We are slowly clearing this off and laying ‘Pipe Bedding Dolerite’. This is a good, bluish gravel recommended to us by a friend in our local HPS group. It will take us a year or two to gradually deal with all our paths. 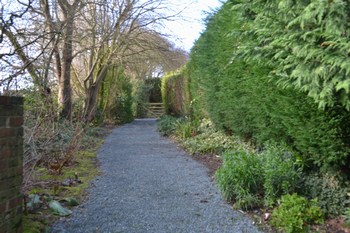 Things are coming back to life. The hellebores are starting to look good. We bring flowers into the house in order to enjoy them. Wendy bought a spiral tea-light holder which makes a very good means of display (see photo). I think that I mentioned Arum ‘Tiny’ last year, saying that I am trying to gather a small collection of well-marked arums. A. ‘Chameleon’ has settled in well and is looking good. Both it and ‘Tiny’ set fruit this year. We have sown some of the seed (the rest went to the distribution) to see if we can get some interestingly marked forms, but with our luck they will all be plain green. 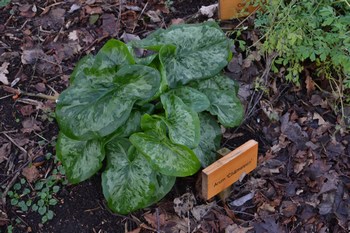 Which leads me nicely to this months ‘seed’ item. Many seeds from a wide variety of genera form ‘Squishy Berries’. This includes Arums, Aralias, Phytolaca, Lonicera, Viburnum and many, many more. Picking the berries is easy, it is the cleaning that is the challenge. Firstly note that they must be cleaned. Simply drying the berries and sending them in is no use. Almost all have germination inhibitors in the fruits that prevent the seed from trying to germinate before it has been through the gut of the vector (usually a bird). If you dry this onto the seeds then they are unlikely to germinate. They need to be cleaned and washed. Luckily almost all, even the tiny ones such as aralia, are denser than water, and almost all the fruit debris is less dense. The best technique is to ‘squish’ them up in a shallow bowl of water. Note that the pulp of some fruits can be irritant. If you are in any doubt wear a pair of the thin protective gloves that are sold for use when painting and decorating. Once they have been well squished, swirl the bowl around and allow the denser stuff to settle in the centre. Gently pour off the top layer of the liquid in the bowl. It is a good precaution to do this into a sieve, just in case you have not freed most of the seed from the debris and it floats off. If you have been successful you will see most of the seed in the bottom of the bowl. If there is still a lot of seed with the pulp in the sieve then return it to the bowl and squish some more. It is a bit like gold panning in the wild west! You will have to repeat this washing process a few times to get rid of the all of the pulp. Once the seeds are clean, pour off all the excess water and turn the seed out onto a piece of folded kitchen towel and leave to dry. There are a few seeds (eg Triosteum, Akebia, some Viburnums) which have a glutinous residue firmly adhering to the seed. I find that this can be reduced by gently rubbing the seed in the bottom of the sieve, so that some of it is removed. However, once thoroughly rinsed any residue of this type does not seem to effect germination. I think its purpose is to give added protection to the seed in the bird’s gut. Quite often some of the seed adheres to the kitchen paper you have dried it on. Don’t worry about this, a few paper fibres will not do any harm. 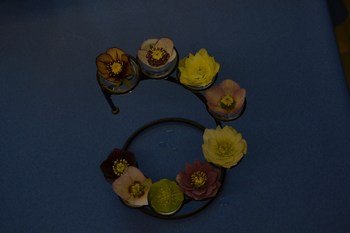 Hellebores in a Tea Light Holder

This may all sound a bit messy and difficult, but once you have tried it a few times it will work well.