In order to make sure that I did not bore you by talking about the same things as last year, I just re-read the blog for last March. Two things stand out: firstly that the spring is so far ahead of itself and secondly that I am so far behind in the general tidying of the garden. By this time last year, in spite of the snow and frozen ground, I had finished clearing off the borders and was about to start planting out. This year I still have about 2 weeks of tidying left. However, the planting out cannot wait if the new plants are to make use of this good weather and so I will start.

One minor cause of my being behind is that I have spent a day or so rejuvenating four alpine troughs at the front of the house. They are cement made to look like stone, about 3 ft long and 18ins wide. We bought and planted them up about 10 years ago and they were beginning to look tired. I removed the plants worth saving, dug out all the old compost and refilled using the instructions on the AGS website. That is to say a layer of rubble over the drainage holes, topped with course gravel. Then repeated layers of a mix of 3:2:1 of John Innes no.2: peat: horticultural grit, each layer firmed down well to prevent gaps that might encourage ants. Before the last layer a few tastefully arranged small rocks were added, the plants put in and the whole finally topped off with a good layer of alpine grit. They look much better and have provided a home for three plants that needed somewhere better to live. One was Draba sachalinensis which Wendy had grown from AGS seed. They are neat little plants with tight leaves and white flowers. Another was Ephedra minima, which had been growing in a much larger planter and being out-competed by its neighbours. The last one was the exquisite Polygala calcarea ‘Lillet’. We were given a small piece of this by a friend in our local group and Wendy has been cosseting it in the shade tunnel (although it is by no means tender) for a couple of years. It is finally big enough to be out on its own. When the blue flowers are out I will include a picture in the blog. Until then you will have to make do with a picture of its relative, P. chamaebuxus. This is a bit of a thug and spreads like a rash in one of our larger alpine areas, but the flowers are very cheering in the spring. I prefer it to the yellow and purple flowered form P. c. var grandiflora, although I do grow this as well. 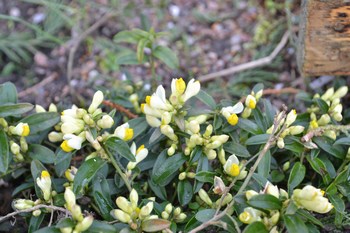 Another reason I am so behind is that there is so much to clear off the borders. The high winds have brought down a lot of dead twigs and branches under our oaks and birches, and last year was an ‘acorn year’. There is a carpet of the things, some of which are starting to germinate. In a normal year I leave all but the largest of the fallen stuff on the woodland borders. I think that, with the decaying leaves, they help to make a good, open, woodland soil, but this year there is just too much. They will all go to shredding and come back as mulch.

Wendy has been creating a new path in the north east corner of our plot. The land slopes steeply down to the winter burn, and in the past we have left it as a wild area, with lots of native saplings, some planted, some self-seeded and a mass of bramble. Last summer we decided that we wanted to partially tame it and had Gerald remove the brambles and thin out the trees. Now Wendy has levelled and edged a path through that is being topped with shreddings. (see photo). The area will remain wildish. She is planting primroses and foxgloves amongst the trees and we may add blue bells, snow drops and miniature daffs later. Primroses (P. vulgaris) and cowslips (P. veris) put themselves into the garden and are welcome, however we had to introduce the oxlip (P.eliator) ourselves. In our garden it flowers marginally earlier that the other two species. It is a lovely thing. 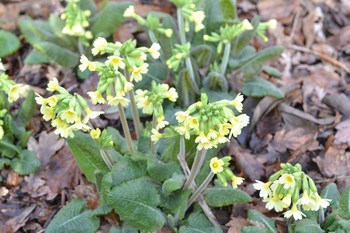 Gerald has been busy continuing to spread the gravel that I talked about last month. The first 10 tonnes have been distributed and a second is on its way. Hopefully we will get the new gravel down on the paths before all the moss which I have so painfully scraped off has a chance to grow back. The constant scraping motion has caused a mild case of ‘golfer’s elbow’ so that I am having to learn to dig up weeds left-handed for a while. 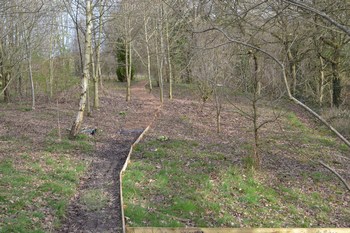 The new path through the wild bit

The camellias are coming into flower and I think it is going to be a good year. The star of them all ‘Donation’ is only just beginning to open. There is a reason that it is so common. It is simply so good. It is vigorous, free flowering and, although spent flowers do look grotty, a quick shake of a few branches and they all fall off. Our plant came with us when we moved into this house and is now about 8 ft tall and as much across. If you have room for only one, this is the one to go for. However, there are lots of other beauties. ‘April Remembered’, ‘Water Lily’ and ‘Saturnia’ are in full flower at the moment. 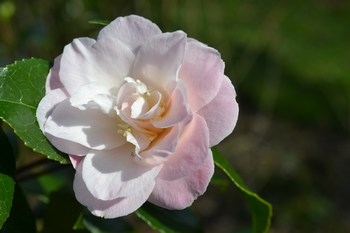 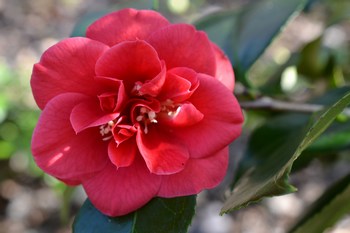 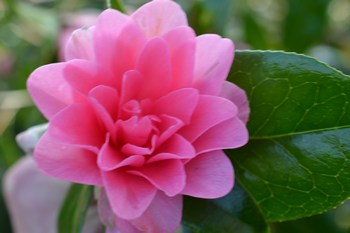 One of the few ornamental trees in the plot when we bought it was a young Cedrus atlantica Glauca Group. This has grown on well, and a few years ago we raised the crown and put in a small raised bed of woodland soil underneath it. This looks particularly good in Spring, with a combination of primulas and various hellebores. Also coming through is the foliage of autumn crocuses, which are the stars later in the year. 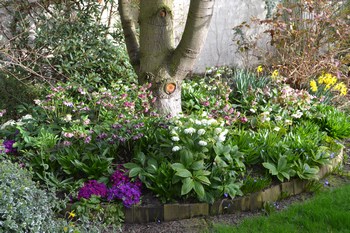 Finally a photo of the first epimedium to flower this year. It is E x warleyense ‘Orangekoningin’. E x warleyense is a hybrid between E alpinum and E. pinnatum colchicum. It is a vigorous clone, spreading by stout rhizomes to quickly form a large clump. The flowers are not as elaborate as some of the Chinese species but are attractive none the less. It is a good, easy introduction to the genus for the novice. 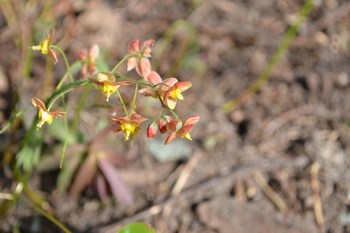