It has been a good spring so far. The garden is looking good, and Wendy tells me that it is also smelling good. We grow a lot of the spring flowering viburnums and have a good specimen of Skimmia ‘Kew Green’ by the path to the house that is apparently pumping out olfactory chemicals. However all this is lost to me as I have almost no sense of smell left.

The Magnolias are magnificent this year. Last year I waxed lyrical about ‘Star Wars’ and it is superb again. But so are many of the others. I enclose a photo of M. ’Butterflies’. We bought this 11 years ago when yellow magnolias were all the rage following an article in ‘The Garden’, but we have not regretted it. It has grown fairly slowly to a spreading small tree about 9 ft high and flowers reliably. The variety name is not quite as stupid as most. If you use your imagination it does remind you a bit of the Brimstone butterflies that we get in the garden in early March. We only have two suitable food plants for the caterpillars in the garden, but they seem to manage. 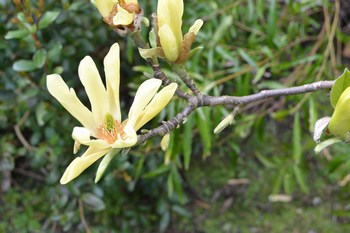 The Erythroniums are out. In addition to E. dens-canis which are finished now we grow patches of E. ‘Pagoda’ and E. ‘White Beauty’. These three are the only ones cheap enough to buy in bulk. I was reluctant to do this for some time, having read that erythroniums will not succeed from dried bulbs, but must be bought in growth in pots. However, I asked the owner of our local nursery where he got all his pots from and he said that he bought the dried bulbs from Parkers and potted them up for sale. He said that although he may have 10% losses it was still good business. So I bought in bulk, and it has worked very well indeed for all three forms. We have a small patch of E. revolutum which we have grown from seed, and are in the process of expanding. I have also started to buy other species and varieties when I see them. In the spring of 2012 I bought a single bulb of E hendersonii for £8.00. Pricey, but worth it. It has bulked up nicely. 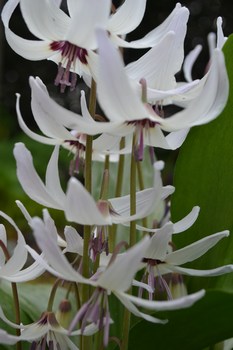 The few patches of tulips that manage to survive Badger attack are also starting to flower. I would like to plant more, but it is just an expensive way of feeding the brutes. I find it difficult to understand the general public’s emotional response to what are essentially stripy faced weasels with a good PR agent. In addition to the tulips they predate bumble bee nests, leaving large holes with a few angry bees all over the garden. I also hold them responsible for the disappearance of the hedgehogs. Both species compete for the same foods (worms, slugs, beetles etc.) with the exception that badgers also eat hedgehogs.

It has warmed up enough to trim the conifer hedges, and this has been Gerald’s main job. I have finally completed the ‘winter tidying’ and immediately started a fresh round, now called ‘spring weeding’. In addition to taking care of the young plants Wendy has been making more paths. Our garden is a bit like the country as a whole. We have good North-South communications, but East-West routes are far less common. She has opened up a ‘B road’ starting in the tunnel field, crossing the long double shrub border that makes one of our major N/S axes and ending in our new shade garden under the big oak. This necessitated crossing several of my drainage ditches. 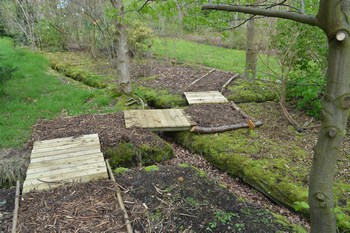 In the middle of the month our new copy of the Plant Finder arrived. Firstly I checked whether any new varieties of the Clethra or Aronia were available for my national collections. There were four new Clethra in the list, two of which are already on their way to me.

The second action was to check on the name changes for the year. In the next week or so I will go through our master list of names of all the seeds that we have received in the seed exchange and update those that have been changed. There are several changes worth noting. Perhaps the most surprising to the average gardener is that celandines are no longer in the genus Ranunculus, but have their own genus Ficaria, with the result that they are no longer Ranunculus ficaria but Ficaria verna. I find these changes annoying, particularly as most, whilst botanically sound, have very little relevance to horticulture.

Checking names for the seed exchange is an interesting process. Our starting point is the master list mentioned above. It is quite quick to confirm a name in this. If it is not in the master list, then our next point of call is the Plant Finder, and we accept their preferred names except when they are obviously wrong. For example, until this year they insisted that Clematis repens was a synonym of C. montana var wilsonii. Anyone who has grown both knows that this is nonsense and it is good to see that they have corrected this this year. If the name is not in the Plant Finder then, if it is a simple species we look it up on -line in ‘The Plant List’. This is an excellent site in that if you are using an out of date name it will put you to the correct current name. The problem is that it occasionally does not agree with the Plant Finder. For example it thinks that the genus Podophyllum is an incorrect name, they should be Dysosma, whilst if you look up Dysosma in the Plant Finder it points you to Podophyllum. If it is an unknown cultivar rather than an unknown species, then we simple search for the cultivar name in Google. If after all this we still cannot confirm the name then we have to omit it from the list.

I’ll finish with a few photos. The first is of an unusual member of the buttercup family, Xanthorhiza simplicissima. It is a small shrubby plant to about two feet. The stems, although woody, are unbranched and sucker up in moist woodland conditions. In the Spring it bears the delicate, dark brown flowers shown in the photo. Not showy, but worth a place if you have the room. 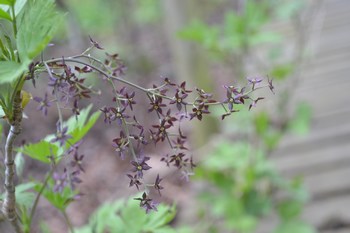 The other two are epimediums. They are flowering well this year. The first is E. grandiflorum ‘Koji’. This is one of the more vigorous of the grandiflorum varieties that I grow. It is also almost evergreen. I wonder whether it is really a hybrid. The second is E. mikinorii. This is lovely thing and surprisingly difficult to source, with only two suppliers in the Plant finder. If you get a chance buy it! 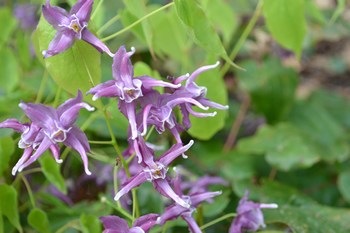 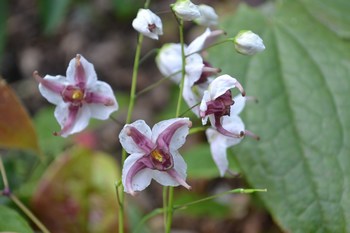