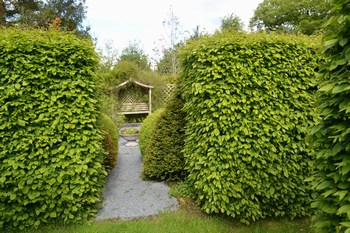 The weeding continues. To enliven it a little I have been taking Sundays off and using them for planting. This has involved at least an hour a week in the vegetable garden planting out brassicas, peas, lettuce etc. It is quite pleasurable to set out the little bundles of leaves and imagine the eating of them later in the year. However, more interesting for me is putting out the new decorative plants. There is an article in the latest edition of the Hardy Plant in which Barry McWilliams describes his experience with some of the seed from Tom Mitchell’s expedition to Japan. We have also had success with these, and two of my recent planting are from this source. The first were six healthy plants of Hemerocallis TCM 12-861. I guess we will have to wait a year or two for flowers, but the plants look good, with quite narrow leaves for the genus. The second were six plants of Actinidia TCM 12-639. These were planted in threes set around two suitable hosts: one an uninteresting willow, and the other a sorbus hybrid of uncertain parentage. I have put three into each tree in the hope of having one of each sex, and hence getting some fruit. The plants are very vigorous and are already twining around the canes I placed to help them up into the trees. (See photo). These seeds germinated very well and we have another three plants that will eventually go to the group plant stall. My other main planting has been of ligularia species also grown from seed from the seed exchange. These were very good quality seed donated by Peter Foley three years ago. We grew them to large plants before planting out as ligularias are one of the favourite foods of our local mollusc population, and if the plants are small they are eaten before they can get their leaves in the air. I have lost several purchased varieties this way. I have also planted out a large plant of Hydrangea hemsleyana which had got too big for the conservatory. This is not really an accepted name; The Plant List gives it as a synonym of H. longipes var.longipes, which itself is an unresolved name. There seems to be a lot of confusion in the naming of some of the ‘aspera-like’ hydrangeas these days and so I choose to keep to the old name. I am not sure the plant is completely hardy but we have a couple of rooted cuttings as back up. 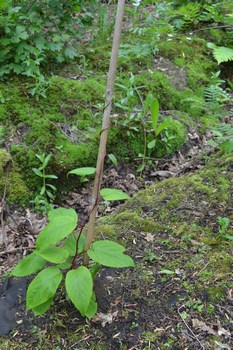 We have been enjoying some of Wendy’s favourite plants for the last month. She loves Primula sieboldii in all its varieties. They grow well in our damp woodland areas and make a good show at this time of year. Wendy has bought several named varieties over the years, but what grows is often not quite what the label promised. I think the problem is that P. sieboldii not only spreads vegetatively but also seeds itself often into the vegetative clump (some pulmonarias also do this). You thus end up with a patch of similar looking plantlets that you think are the same variety. These get propagated as the original but are not. However, we cannot really complain. We may not have the exact form described by the variety name, but all are lovely plants. Some examples, with the names they were bought as, are shown in the photos. 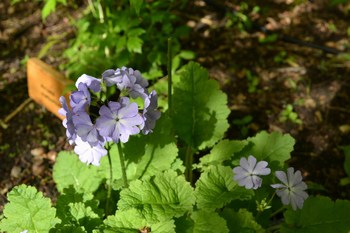 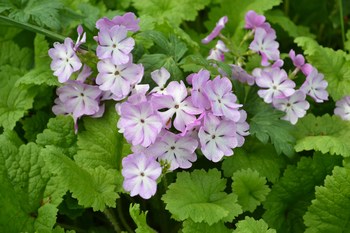 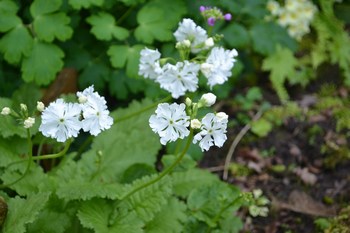 It occurs to me that I spend most of my time in these blogs talking about plants and not that much about the garden itself, and so I have decided to occasionally include a small section describing a particular area. I’ll start with a rather small garden situated at the end of our herbaceous borders. It is roughly 40 ft. square and surrounded on three sides by hornbeam and on the fourth (the east) by a yew hedge which contains the entrance to our maze. We call the area the ‘arbour garden’ and it is one of our few semi-formal areas. I enclose three photos: one from the outside looking in, one from the seat of the arbour looking out and the final one from the NE corner. The formality is given by the clipped yew cones and box balls, and of course, the central basin. Much of the planting is shrubs chosen for scented flowers. Viburnum carlesii ‘Aurora’ is now finished and the deciduous azaleas are in flower. These will be followed by Philadelphus ‘Minature Snowflake’, Wisteria frutescens ‘Amethyst Falls’, several scented peonies, Rosa ‘Blanche Double de Coubert’ and Magnolia ‘Maryland’. This is a hybrid between two American evergreen species M. grandiflora and M. virginiana. I have failed to grow grandiflora, although a neighbour on higher ground has a good one against a wall. Virginiana does grow for me, but slowly. The hybrid is much better than either, being vigorous, healthy and flowering reasonably well.

The arbour is a pleasant place to sit in the morning. Unfortunately, as it faces due west, sitting there in the evening means that the sun is in your eyes!.

Behind it is the entrance to the maze. This was planted soon after we moved to the house. We planted it originally in yew, but this struggled in places, the ground being too wet, and so we inter-planted with hornbeam and it is now a mixed hedge. It has grown well and people do get lost in it! 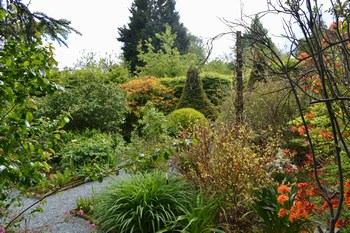 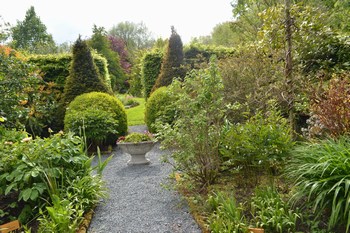 Epimedium of the month is E. campanulatum Og.93-087. According to Stearn’s monograph this represents an early stage in the evolution of epimedium flowers. They are simple yellow cups with no spurs or pouches. However these are produced freely along airy spikes. Worth a place in any garden. 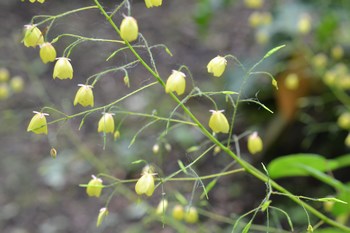 In the March blog I promised a picture of Polygala calcarea ‘Lillet’ once it was in flower. Here it is. Why do you not see it more often? 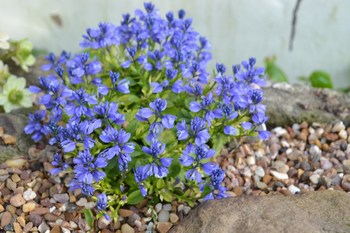