The constant round of weeding is over. I would like to do some planting out, but I am still concerned that there may be another dry spell to come before autumn sets in. Instead Wendy and I have made a start on our new projects. One is to build another area of gravel garden to accommodate some dierama species that we have grown from seed sent to the distribution scheme by Ray Brown a few years ago. The clumps are now big enough to go out and face the world. The question is how to arrange a ‘summer wet-winter dry’ environment for them. We have chosen to build a gravel area around the outside curve of the semi-circular pergola that surrounds our grass garden. This is at the top of the slope that runs down to the winter burn. Miscanthus has done very well in the grass garden because seepage delivers summer moisture and the slope gives winter drainage, and so we reason that 6 ins of gravel around the edge downhill from the grasses will give good drainage but allow the roots to get down to the moisture in the summer. The curve borders an area which we pretentiously call the ‘Side Lawn’ even though the grass is outnumbered by clover and the whole area is pock marked by remains of mole hills of the poor sandy soil that overlies the solid clay beneath. We have started by clearing the stuff that was growing in the area: mainly some flag irises, a few self-seeded miscanthus and two big clumps of Spartina pectinata ‘Aureomarginata’. I am leaving some of the latter as it is a lovely grass, but this will create problems of control down the road; it spreads like a rash. The second job was to remove the planting fabric that had been laid when the pergola was built. This has helped weed control since, but would prevent the new plants getting their roots down. Wendy then fitted an edging of 6 in boards that will eventually hold back the gravel. Things will now be left for a month or so for the removed Spartina to dry enough to burn. Over the winter we will barrow in the gravel and plant it up next spring. 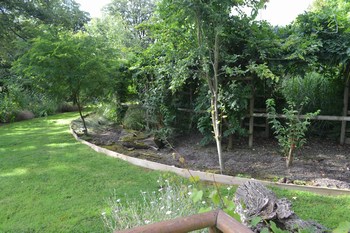 Soon to be gravel bed

The summer flowering shrubs are looking good. The buddlejas have been very early this year. B. davidii ‘Blue Horizon’ was finished by the first of the month. I have deadheaded in the hope of a second flush. Even ‘Autumn Beauty’ which is usually late is already in flower. Late emerging butterflies may have a hard life this year. Clerodendrum bungei is also in flower. I know it is a terrible runner, but the suckers are easy enough to pull out where you don’t want them and the flowers are lovely. If the winters are cold it tends to die back to the ground, but grows again somewhere else in the border. I used to have a very good specimen of C. trichotomum. It made a single stem small tree to about 8 ft tall and as much across. It suddenly died off with no apparent cause. However, 4 years later suckers are appearing and one has put itself into an open area where it can be left. I hope it does as well as its parent. We have a small seedling of C. trichotomum TCM12-909 grown from the seed Tom Mitchell sent to the distribution scheme. I hope that this will be hardier than the Crug plant C. trichotomum 'White Calyx' BSWJ 4896 which we bought in 2002. This behaves as a non-flowering herbaceous perennial, being cut to the ground every year by even the slightest frost! The other clerodendrum that we grow is myricoides ‘Ugandense’. This is tender and is planted in the conservatory. It is not in flower yet, but I include a photo from a few years ago. Can anyone explain the evolutionary advantage of having flowers that look like blue butterflies? 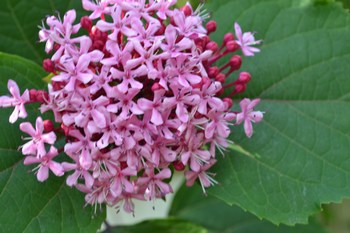 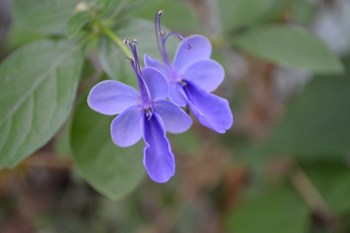 I am deliberately not writing about hydrangeas this year, but I can’t resist mentioning a close relative. We first bought Dichroa febrifuga in 2001 from Crug. However, it was a failure outside, being cut down to the ground every winter and hence failing to build up any flowering buds. We brought it into the conservatory and it flowered reliably. Things remained like this until we saw a huge clump in full flower planted out in woodland in the Old Vicarage Gardens in Norfolk. It was obvious that some clones were hardier than others. Then, about 4 years ago we were given another plant in a pot by a friend living on a hill side 20 miles away. They said that this plant regularly spent the winters outside and flowered well. We kept this in the conservatory so as to be sure not to lose the strain, grew cuttings and planted one of these out in the spring of 2013. It overwintered well and is in flower. The leaves and habit of the plant are just like H macrophylla, but there are no sterile florets and the fertile ones are larger. The fruit is said to be a berry, but I have never seen any on our plants. Flower colour depends on soil pH as with Hydrangea. The genus is very close to Hydrangea and inter-generic hybrids have been raised by Reed et. al. in the USA. Unfortunately none of these interesting looking plants made it into commerce. 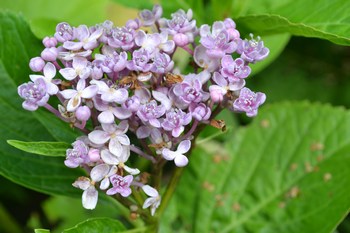 A month or two ago I was bewailing the fact that in 8 years of searching I had been unable to find a female Helwingia chinensis. A couple of weeks ago I was doing some on-line window shopping when I came across the ‘Swines Meadow’ nursery. Amongst other interesting plants it listed the narrow leaved form of H. chinensis and said that theirs must be female because it always berried. I failed to master their on-line purchase system, but a phone call found a friendly human and I now have a plant. With the plant came a leaflet advertising the HPS, so I must assume that the owner is a member. If so, and if you are reading this THANK YOU. It will be planted together with my male and I look forward to berries.

I’ll finish by reporting another success with Tom Mitchell’s seeds from Japan. This is Hosta TCM12- 838. Although only planted 2 years ago these have already produced flower spikes. As you can see from the photo, these are on relatively tall stems over small clumps of narrowish leaves. You will also note that the leaves of this form are just as attractive to slugs as those of any other hosta. I think they will look good planted together in a suitable shady spot. They will go out next year. The other four plants in the picture are another Mitchell collection, H.sieboldii TCM12-706. We are doing very well with the Mitchell seeds, with many other small shrubs growing on well. We will have to find room for quite a few things next year. 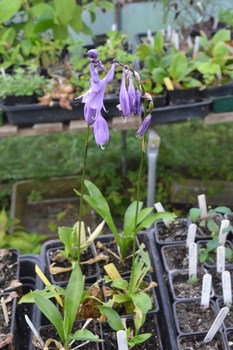