Last Month in My Garden: September 2014

My decision that the weeding for the year was over was a bit premature and at the end of August I had to start another round. Actually it is quite enjoyable as it gets you up close and personal with the plants as they get ready to disperse their seeds. I know I keep banging on about seed collection, but it really does get you to know your plants at a different level. Eg. for many years I assumed that the seed pods of Roscoea must be like those of tulips and open by splitting when dry, but somehow I never seemed to find them at the right state. Then about five years ago I noticed that what they really do is swell with water, split and just expose the seed for ants to carry them away. This is illustrated by the two photos. The first shows an unopened pod of Roscoea alpina, and the second a pod that has split to expose the seeds. You can see the small white elaiosome at the end of some of the seeds. These are the ant’s reward for its efforts. This process is easy to see in Roscoea alpina, as the fruits are held on a fairly long stem that emerges above the tube of the leaves. In many other species the fruit is surrounded by the sheaths of leaves. It splits and spills its seeds down into the sheath, with the result that they are hidden until the leaves wilt and decay. Thus collecting Roscoea seed can be a bit of a challenge. You need to keep a watch on the fruits and try to choose the moment just before they split to collect them. This is probably why we do not get much seed from this genus sent to the distribution.

Wendy has been continuing to work on the new projects for the year. This summer we visited East Lambrook Manor Garden and were impressed by the terraces. We decided that we would like to try to reproduce the effect of narrow paths between narrow borders with relaxed planting. We had a suitable area to try in our ‘Chain Link Field’. The area had been invaded by perennial weeds and we had already poisoned it off ready for re-development. Wendy produced a design and constructed the edging for the raised beds and erected a corner seat. My job in the winter is to fill these beds with compost and ditch diggings. We must now sit down and plan the planting.

Last year I talked a little about our national collection of Clethra. We have a second national collection, this one of Aronia. Superficially it looks like a small genus of only two species (alnifolia and melanocarpa) and a naturally occurring hybrid between these two (x prunifolia). Horticulturally they have fairly short seasons of impact. The corymbs of white flowers in the spring are pleasant enough, but out classed by many other spring flowering shrubs. The berries (red, black or purple) are good, but are really only the warm up act for the main show as their leaves turn various shades of red, orange and purple. However things are made more interesting by two other factors. Firstly, as the berries are of interest as a new super-food, there are many varieties that have been bred for the fruit trade. Although developed for colder climates there are commercial aronia farms in the U.K. I don’t know how they arrange to gather a crop as ours are stolen by the birds long before we can taste them. The other complication is one of genetics. Firstly they form inter-generic hybrids, particularly with Sorbus, (x Sorbaronia) and it is believed that many of the large fruited varieties grown commercially actually have some Sorbus in their genome. Secondly there is a tendency for some to set seed by apomixis. This leads for a complex set of supposedly simple varieties with a very poorly understood genetic make-up. We have 18 different taxa in the collection and in a good autumn the colours can be stunning. As an example of this the picture shows Aronia arbutifolia.

The fruits on Dipteronia sinensis are now turning a pinkish beige. This is a really good small tree and I am surprised it is not grown more widely. Ours was grown from seed picked up from the path in a botanical garden ten years ago. It is now a multi-stemmed, small, deciduous tree to about 20 ft. The pinnate leaves are very attractive as are the large sprays of creamy white flowers, but it is the fruits that are the main attraction. They form circular wings around a central seed. These are a good red colour in summer and then age to a pinkish beige as they ripen. I enclose a picture of them taken at the red stage. Botanically the species is a bit of an oddity. It is the only species in the genus, which is now the only genus in the family Aceracea, the botanists, in their infinite wisdom, having moved Acer to the Sapindaceae.

Gerald has finished the ‘Hay Making’ and our wilder areas are looking a little more tame. I enclose a photo of the north eastern section of this, looking south. We call this area ‘The Ride’ even though it is not long enough to get any horse into a trot. When we moved in it was rough pasture with a single large oak. We decided to leave it wild whilst we got on with the rest of the garden. We came back to it after a few years to find it invaded by creeping thistle. At this stage we decided on a broad path (the ride) curving down the centre that would be regularly cut, and on either side we planted interesting trees as we grew or bought them. Old carpet protected the saplings from too close an encounter with the thistles. Wendy started a campaign against them. The first attempt used glyphosate, which killed off the top growth but left the roots unaffected. She then tried regular cutting to try and starve the roots. It failed. Finally she read that cutting would work if you used a long sharp knife and cut the roots through as deeply as possible underground. After three years of such individual attention they are finally gone. For the past three years we have also been strimming off the grass in August. All this time of course the saplings were growing, and now we must admit that the area looks much better with cut grass than with long stuff. The decision has been made to mow the area from now on. This has been made easier by the fact that the construction of new beds in other areas has reduced the amount of grass that needed cutting, and the purchase of a new and more powerful ride-on mower last year makes the whole process quicker. Hopefully as the trees grow further the shade will slow down the rate of grass growth.

Finally a picture of some of one of the stars of early autumn. These cyclamen are the result of us scattering excess seed in the then new area of shade garden. Other than not weeding them out they have been given no extra care. The flowers are nice, but the different leaf patterns are wonderful. 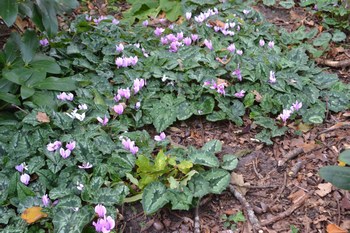