Last Month in My Garden: November 2014

My main task this month is to re-plant our soft fruit. At the moment it occupies two long beds each about 30 ft by 4 ft. One is filled with raspberries ranging from early, through main crop to autumn varieties, the other houses three large black currant and two gooseberry bushes. It needs to be changed for two reasons. Firstly nematodes have invaded the raspberries and they have been losing vigour over the past few years. Secondly it was planted when we had two other mouths to feed, and now produces far more fruit than we require. The plan is to take over one of the other plots that is currently part of the vegetable rotation and plant a small number of main crop and autumn raspberries, together with one blackcurrant and one gooseberry. In the short term the current soft fruit plots will be used for vegetables. Some time in the future we want to build an alpine house on part of the land. I think I will work in two stages. This year we will plant the new plot and remove the raspberries, planting potatoes in their place. This will leave us some gooseberries and blackcurrants whilst the new plants bulk up. The old bushes will then be grubbed up next year. Wendy has already propagated the blackcurrants and gooseberries, but we will have to buy some new, disease free raspberry canes. 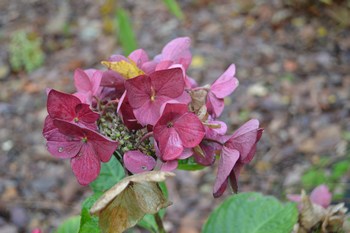 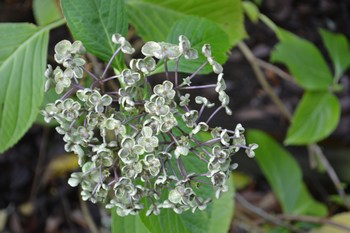 In search for these I visited our local nursery at the end of October. The Eastwick Plant Centre is only about four miles away. It is run by two brothers who produce most of their own plants, but also buy in some specials from good British producers. They are not as precise with their labelling as one would wish, but I have had some good things from them over the years. Two rather rare varieties of Carpenteria californica, a superb Stewartia pseudocamellia grown from seed collected by Ogisui in China, my first Helwingia and a still unidentified x Mahoberberis with lanceolate leaves and light yellow flowers. There were no raspberries as, given the mild weather, their supplier still had not lifted them; however in spite of all oaths to the contrary I bought another tree. I had read about Parrotia subaequalis in Grimshaw and Bayton’s ‘New Trees’ and here it was in my local nursery. Obviously fate had brought us together. It was a well formed, upright specimen; about 5 ft tall and well branched. It is now planted. I look forward to the superb autumn colour when it grows up.

Gerald has been spending most of his time trimming the mixed thorn hedging that surrounds our garden and supplies some of the internal divisions. We planted it when we first moved in and it now looks as though it has been here for ever. It has made an incredible difference to bird numbers. When we first moved in there were very few, now they abound. Wendy and I finished our main involvement with the seeds towards the middle of the month. I am now working on tidying the garden, earlier than usual, but I expect to be out of action in January, and so need to get as much done now as possible. Wendy is tidying the tunnels, greenhouse and conservatory for their winter guests. 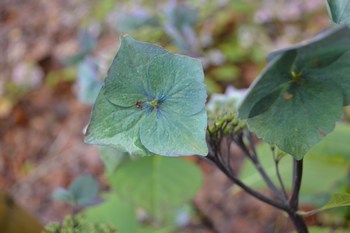 We will soon need to start serious leaf clearing, but there are still a lot up in the oaks, and it is the sort of job that you only want to do once a year! We are trying a new experiment this year. There is an area in the north of the garden that we planted with trees early on in our time here. These are now big enough to give a good area of light shade, and we would like to develop it for shade planting. The area is very wet, particularly in winter, and we will need to raise the beds to ensure winter drainage. We decided to try an easy way and have been piling grass cuttings, the results of ‘haymaking’, and lots of other waste onto this area all year. We have also decided to pile the dead leaves there this winter. The hope is that in a couple of years we will have a ready-made area of woodland soil. Whilst it is ‘maturing’ we will be looking for some inspiration. We would like it to feel different from the other shade areas in our garden, perhaps focusing on a different group of shade plants. It could be an opportunity to start to take woodland lilies and their relatives a bit more seriously.

Whilst the seed exchange is fresh in my mind I would like to make a point about Echinops. People spend a lot of money in postage sending us dead flower heads sometimes with, but mostly without seed in them. There are two photographs below. One shows the mass of chaff and the other the few true seeds that were sent in as Echinops ritro var ruthenicus. We do not normally have time to clean seed. I struggled with this one as it was the only sample of the variety that we had this year. Normally all we can do is check the sample to make sure there is some seed and send the whole mess to be packed into glassines and hope that the customers get something they can use. It is fairly easy to detect the large, firm seeds in the flower heads and remove them from the chaff before sending them to us. 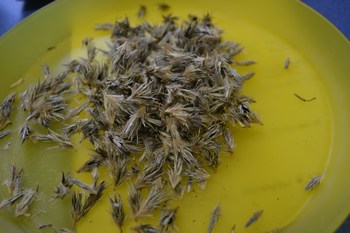 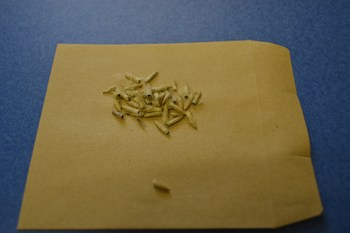 I have disciplined myself fairly well this year and not spent much time in this blog on Hydrangeas. However, I am going to yield to temptation. In many species of the genus, once the fertile flowers have been fertilised, the sterile florets turn over and change colour. Perhaps it is a signal to pollinators to concentrate their efforts on the other inflorescences. Regardless of the reason, this can give the gardener a final reward for his efforts. This year some of my varieties have been particularly fine. Perhaps the best was H. macrophylla ‘Zorro’ in which the florets turned from dark blue to a metallic jade green. They are a bit past their best now, but the photo will give you the idea. In the reds the best have been H. macrophylla 'Rotschwarz' and H. serrata ‘Greyswood’. H. serrata ‘Cap Sizan’ had some good grey-blue tones, although they do not show up too well in the photo. And the old stalwart H. macrophylla ‘Ayesha’ looks good even when the colours have faded. 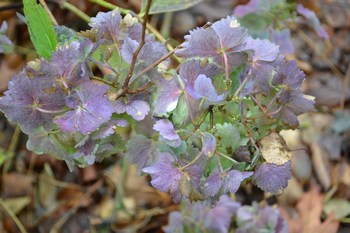 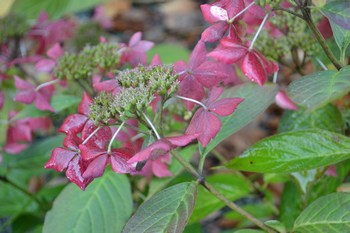 Finally a photo of Camellia sasanqua. We do not really have the climate to grow them well here; however this pink semi-double which was given to us as a rooted cutting several years ago has survived all the vagaries of the climate over the years. It is not that vigorous, and grows only slowly, but the flowers are a delight when there is very little else in bloom. 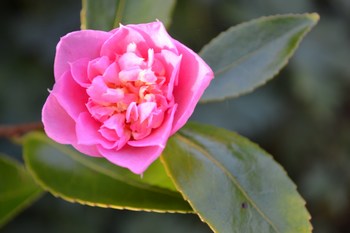