Last Month in My Garden: December 2014

Wendy has been working on replacing the canes in our miscanthus ‘tunnel’. This is an area of the garden that we call the ‘tunnel field’ because it used to have a willow tunnel. The total area is about 75ft square and, apart from the entrances, is surrounded by a ditch and small hedge. It is one of the wettest parts of the garden, and when we arrived was just couch grass and mainly docks. I dug the ditches and we planted some water loving trees (willows, alders and a taxodium) and basically left the area alone for a few years. Finally we got around to taming it about 9 years ago. We decided not to fight nature and dug a kidney shaped pond at the lowest point using the spoil to raise the level in a curve in the central portion of the plot. The surroundings of the pond and the other lower areas were planted with lovers of soggy soil (irises, rodgersia, ligularia, astilbe etc.) The areas on the bank and towards the boundary where the ditches give good drainage were planted with some interesting shrubs and small trees including the major part of our collection of clethra. We decided to add an air of mystery by planting a curving willow tunnel covering one of the entrances. It was about 50ft long. We used Salix verminalis. This was not a good choice. It soon lost all greenery at the base and then reached for the sky from the top of the arch. We fought it for a couple of years and then, three years ago, decided that it had to go. Gerald dug out the willow and Wendy constructed a light wooden frame on both sides. This was then fitted with stripped canes of our own miscanthus (M. x giganteus and its varieties). After three years this now needs replacing. The first photo shows the old canes a few weeks ago. They were removed and broken up to make kindling for the fire. Gerald cut this year’s miscanthus crop and Wendy stripped the canes and placed them upright, ready to be attached to the frame. She then used a nail gun to staple them to the frame to give the renewed ‘tunnel’.. It gives the feeling of a tunnel, but allows hints of what lies beyond and, more importantly, lets in more light than the willow version. 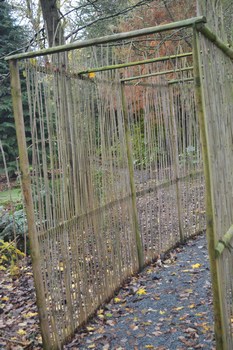 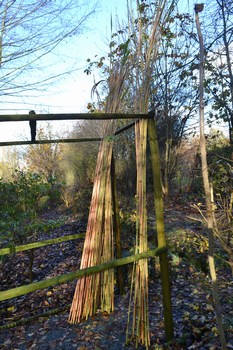 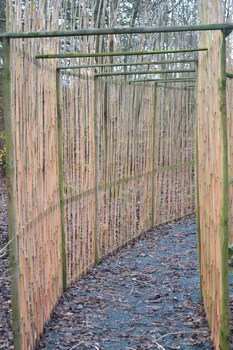 This summer we acquired two rescue dogs. They are a lot of fun, but do they not have good garden manners. We confine them to the area ‘within the walls’ at the back of the house, but even so they have done considerable re-modelling and pruning for us. They took to climbing on my raised shade bed which houses some of my most precious shade plants. This has had to be fenced off with a small plastic fence. It is only a foot or so high, but seems to be enough to prevent them jumping up. One of their favourite games is high speed chase around our gazebo, and the grass is now gone leaving a speedway track. Low branches of brittle shrubs do not survive, but they are mostly big enough now to accept ‘crown-raising’. With the exception of a few rare-ish epimediums there are no really precious herbaceous plants in the area, and it will be interesting to see during the course of next year what can and what cannot survive their attentions. We have had dogs before, but all came to us as puppies and had garden discipline instilled from the start. These two are both about 2 years old, teenagers in dog terms, and beyond learning such difficult concepts as grass-good and soil-bad.

A few days ago we received our allocation of seed from Ray Brown’s expedition to the Himalaya. We enjoy growing wild collected seed and over the years we have had some interesting plants from Ray’s Sakhalin expedition, from several of Chris Chadwell’s trips, and of course, from the seed from Tom Mitchell’s Japan collection distributed via the seed exchange. There are several interesting things in the seed Ray has sent us. I am particularly keen to try to make a success of the two species of swertia he has included. We had some swertia seed from Chadwell a few years ago. We managed to grow one small plant, but it died on transfer to the outside world. There is very little advice on cultivation available and even the on-line flora are quite terse in describing where they grow. ‘Meadows’ and ‘Hillsides’ does not help much. If anybody has some experience, even negative, I would like to hear about it.

I have been spending most of my time continuing the general winter tidying, including spreading compost and leaf mould where required. The shear amount of vegetable matter that comes off the beds in this process is always a source of wonder for me. I emptied a compost bin 10 days ago and it is now almost half full again. However, you can never have too much compost and I prefer to think of the process as a harvest rather than a chore. I have also been collecting late ripening seed for the distribution including some rodgersia, astilbe and kirengeshoma seed as well seed of several late ripening shrubs. I have missed most of the stewartia seed this year, but did manage to get a small amount from S. sinensis, this being the first year that it has set fruit. Apart from the heteromalla and the paniculata all the hydrangea seed is yet to ripen, so I will have to make another circuit in a few weeks time.

There are also fruit on Illicium henryi, although I doubt that they will ripen before the frosts kill them. I. henryi is a good evergreen shrub for a sheltered spot in the garden. It is probably the hardiest of the genus. Ours survived the harsh winter of 2011 without serious damage, and there is a very old specimen in the garden of Erddig house a few miles away from us indicating that ours should survive long term. The genus also includes Szechuan pepper and star anise. You will see the resemblance in the photograph of the fruits, but the fruits of I. henryi should not be eaten. It is poisonous. The flowers, which appear in summer, are small but very pretty. It is a good shrub if you fancy something a little different. 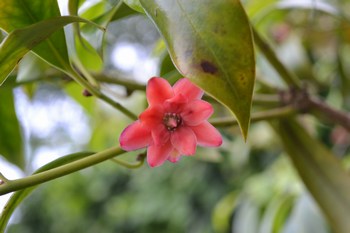 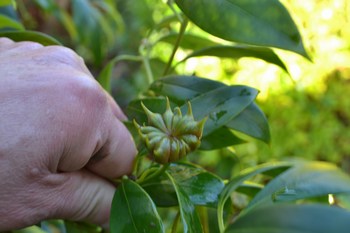