Last Month in My Garden: January 2015

The repeated cycles of a short cold spell followed by a very warm interlude this month has caused confusion to several of our plants. I already have an early cardamine pushing its shoots through a good 6 weeks in advance of normal. I bought it as C. laciniata back in 2002, but the leaves don’t match the illustrations of this species, so I am not sure what it is. It spreads like a rash, covered with pretty purplish pink flowers in spring and returns to the ground by June. It is an excellent spring ephemeral. I hope it survives! Trachystemon orientalis has also started to push up its flowering spikes, but these do not survive the cold spells. Luckily it is grown mainly for the foliage. It is an excellent plant for dry shade, looking very lush and healthy even where it has seeded itself under leyland hedging! But perhaps the most unusual ‘early visitor’ is shown in the photo. We really do not expect camellia flowers here until well into March. Again I am not sure of the variety. It was bought in 1997 as a small, just-rooted cutting labelled ‘Kimberley’, but this is a single-flowered variety and ours obviously fully double. I suppose something went wrong with the labelling at the nursery. Regardless of the name it has grown over the years to form a good shrub, now 5 ft tall and normally flowering well in the spring. 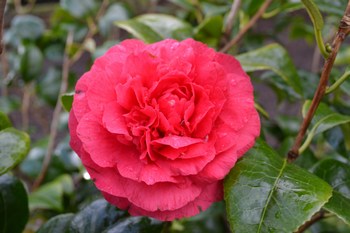 Wendy and I have both been working with the leaf mould recently. I have been spreading a mulch over our raised shade beds to make up for the fact that they do not get a natural supply. Wendy has been sieving some to help make potting compost to be used when she pots up the young plants in the spring. I thought you may like to see her system. She uses a large metal sieve which sits in the well of a broken wheelbarrow (you can tell we belong to the Geoff Hamilton school of gardening.) Sieving is necessary, not only to remove large bits of woody material, but also, as many of our leaves are raked up from gravel paths, a fair bit of stone. 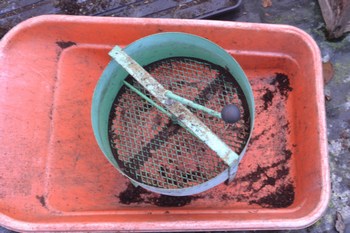 January is a difficult month to fill up a blog. In my first year I talked about bark, in the second about winter flowering shrubs, this year it will have to be conifers. Until I started writing this I did not think we had many. When we moved into the house, about the only decorative gardening here were three 1970s miniature conifer beds which by 1998 had grown well out their bounds. I had to completely remove two which were blocking views from the living room. The third was left to grow into a ‘mixed hedge’. This prejudiced me a little towards the group. In spite of this we did buy a few plants to help provide a wind break as the site was quite exposed when we moved in. They grew well for a few years and were just beginning to perform their function when we had a fierce storm following a period of heavy rain. Many were uprooted, reinforcing my opinion that they were not for us.

In spite of this I seem to have been collecting them by osmosis. Walking around the garden with a particular eye to conifers I realise that some of the ones I have bought have grown into attractive trees. I do particularly like the deciduous conifers and grow Pseudolarix amabilis, Metasequoia glyptostroboides, Taxodium distichum and several larches, but these are just a tracery of branches at this time of year and I should concentrate on the evergreen ones here.

There were two good trees here when we came that have continued to grow well: one a Cedrus atlantica glauca group which is still only a mere youth at about 35 ft, the other a Leyland cypress which has been allowed to grow. It is now at 45 ft and still growing. They have a bad reputation as hedging, but as a free-standing tree they are quite impressive.

To these we have added several. Let’s start with an oddity. I bought Abies nordmanniana 'Pendula' in a January sale in 2004. It was about 4ft high. I planted it at the edge of a ditch to ensure it had decent drainage and then sort of forgot about it. As the photo shows it is growing up! 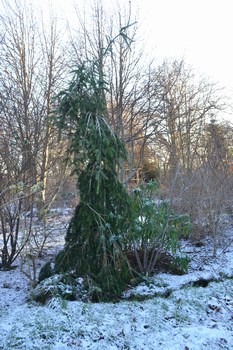 I really like pines, but our soggy site does not suit them well and we have lost several seed-grown plants given to us by a neighbour to winter wet. However, P. wallichiana is such a lovely plant that we gave it a prime spot at the back of the herbaceous border. It is an elegant pine with long needles and large, slender cones which it produces quite early in its life. Ours was planted in 2007 as quite a small plant and is already producing them. It will make a very large tree with time... but we will not be around to worry about it at that stage.

The long fine needles of P.wallichiana are one example of the wide variety of needle size and shape in the conifers. I enclose pictures of three that we grow. Firstly Juniperus rigida, which has spiky needles looking (and feeling) more like a gorse. This is a slow growing plant, never getting more than about 30 ft, native to Japan Korea, China and into Siberia. Ours was grown from seed in 2000 and the tallest of the three we planted out is only about 7 ft. 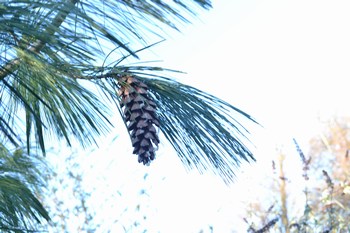 In contrast the needles of Cunninghamia lanceolata are soft and elegant. This is another Asian conifer. Eventually it will make a conical tree, but ours is slow to grow. I was told it needed winter shelter, so it is planted in a well-protected but rather shady spot. I think it would like more light.

Finally the needles of Sciadopitys verticillata are long and arranged in whirls around the branches. This plant, known as the Japanese Umbrella Pine is another ‘living fossil’ being the only extant member of its family, the Scadiopityaceae. It is endemic to Japan. When young it makes an upright, conical plant, but with age it spreads and can get quite big. I remember a fine specimen in Dawyck Botanical Gardens that had spread to cover quite a wide area. 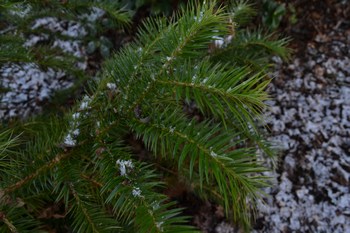 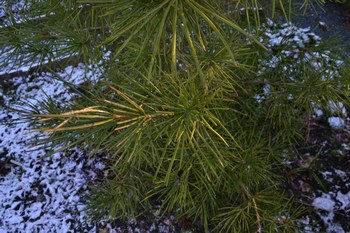 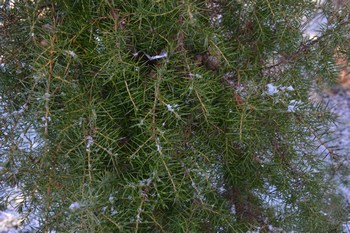 You will gather from what I have said above that many conifers can be slow to grow, however others grow at a phenomenal rate. I bought the Sequioa sempervirens shown in the picture as a 3 ft plant in 2001! 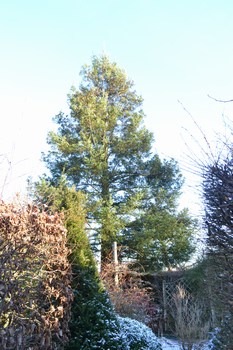 One final picture for the month: I was clearing a bed when I noticed the seed heads of Cardiocrinum giganteum had opened and spread their seed. Normally I clear them off much earlier in the winter as I search for the offsets to pot up, but these ones had been left to complete their cycle. I was struck by the fine, tooth-like fringing along the edge of the pods and took the enclosed photo. It looks like some alien, three jawed sea creature! 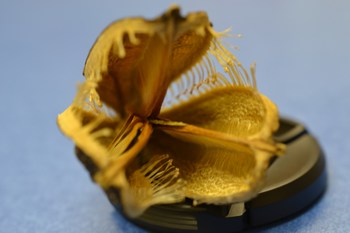