Last Month in My Garden: February 2015

I have been unable to work in the garden for much of the month. At the end of January I had an operation on my right hand to straighten the fingers (Dupuytren’s contracture). It seems to have worked well and I am looking forward to being able to use secateurs again! However both Wendy and Gerald have been hard at work.

In the beginning of the month, Gerald spent a day hauling gravel to our new area of gravel garden. I described this in the August blog last year and showed a photo of it at that stage. It looks a lot better now the gravel is in place. I will start planting it up in the spring. We have several seed-grown pots of various dierama species to go in there. More recently he has been using his chain saw, firstly to cut up fallen branches, and then to coppice some of the willows. We manage to supply all our firewood needs from the garden. 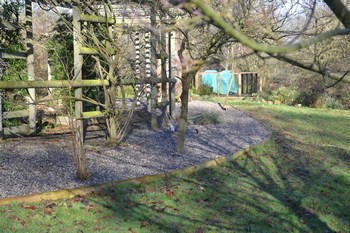 Amongst other things, Wendy has been putting green plastic coated wire border fencing around the beds in the area within the walls immediately behind the house. The new rescue dogs which I mentioned in December’s blog really have become too destructive to be allowed free-range on the beds. They have started removing lower branches from the shrubs to play with. They seem particularly fond of Hydrangea arborescens ‘Annabelle’ which they chew up with obvious pleasure. I know the Japanese make tea from some varieties of H. serrata, but dogs and arborescens is new to me. The green fencing makes the area look like a 1950s public park, but at least it will give the plants some protection. 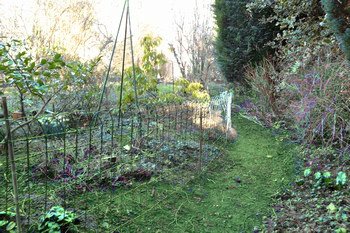 Last year I said that we had to resurface our gravel paths. This was quite successful if a bit expensive. This year we will have to face up to the fact that many of our grass paths, which worked well whilst the garden was young, are now so shady that they have become mostly mud and moss. I think there are four options: try re-sowing with a more shade tolerant grass mix; resurface with wood chippings; resurface with gravel; or lay paving. It will end up being a combination of these options depending on how shady the path is and how much wear it gets.

The moles seem to have started their explorations early this year. When we first moved in we hired mole catchers to try to get the little darlings under control. This provided only temporary relief. We then seemed to reach an unspoken agreement. They did not come onto the main lawn within the walls and we allowed them free range elsewhere in the garden. This had the added attraction of providing a steady supply of mole-hill soil for Wendy’s potting compost. The disadvantage was that they would occasional undermine some precious plant which, if you failed to notice the problem, would soon shrivel from lack of a good water supply. If they continue their current territorial expansion there will soon be border incidents leading to a resumption of hostilities. (We will need to find a new mole-catcher. The old one retired.)

The badgers have also been active. Before we had a log burning stove installed I used wooden branches as a path edging in the shady areas of the garden. These are now rotting gently, providing a home for all manner of bugs and grubs. The problem is these make an attractive snack for the stripy faced weasels, which tear the logs apart making a mess on the paths. Wildlife is great as an abstract concept! 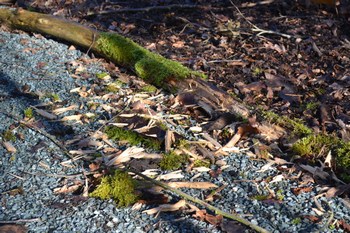 The cold and cloudy weather this month seems to have put spring on hold for a while. Snowdrops, snowflakes, and aconites look good, and the hellebores are working up towards their main display, but the rest is still looking tired and a bit winterish. Given this, I thought it might be a good opportunity to talk a bit about ivy. There are few plants that can be both a pernicious weed and a major garden stalwart, but ivy is one. In our moist and mostly shady spot, bird-seeded ivy is everywhere and, left alone, soon covers almost every surface. Every autumn and winter I end up taking wheelbarrow loads to the compost bin to prevent it choking more precious woodlanders. However, I must admit that where it decides to scale a tree it can look stunning, particularly when it reaches the arborescent stage and produces woody side branches covered in flowers and then berries, both of which are a larder for garden wildlife. It is said that taking cuttings of arborescent branches result in arborescent shrubs. We stayed at a B&B in Worcestershire once that had several planted in their garden looking a bit like a smaller version of Fatsia japonica. We have never tried taking cuttings but I do have a purchased plant of Hedera helix ‘Arborescens’ which has made a pleasant evergreen shrub. 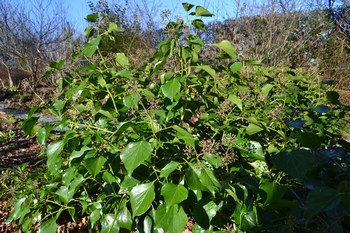 Of course it is the cultivated variegated forms and the varieties with unusual leaf shapes that find most use in the garden. The national collection is close to us in Erddig Hall and is well worth a visit. However, as with most garden plants I think there are more names than distinctive features. There are good variegated forms in both yellow and silver and they work well to brighten up a dark corner. A couple of years ago we decided that we wanted to clothe part the breeze block retaining wall that Wendy built close to the eastern edge of our property with interesting ivies. It was not easy to find good named forms in our local nurseries. However the house-plant sections of local garden centres had small pots produced for bottle gardens each of which contained several recently rooted small cuttings. We selected a few good variegated forms, potted them on and found it a very cheap way to clothe a wall. They do seem to prefer to grow west and cover the border rather than east and down over the wall, but a firm hand with the shears keeps this under control.

I am also fond of forms with interesting leaf shapes and patterning. The photo shows a few that we grow. The first is a form which occurred naturally as a seedling in the garden. The second was bought as H.helix ‘Mein Herz’ but the leaf is more elongated than this type. ‘Shamrock’ is a really good form with spidery leaves and ‘Spetchley’ is a delightful miniature, good for a shady spot on a rockery. H. pastuchovii ‘Ann Ala’ is a selection of a species from the Caucasus made by Roy Lancaster. The leaf patterning is better in real life than my photographic skills portray. 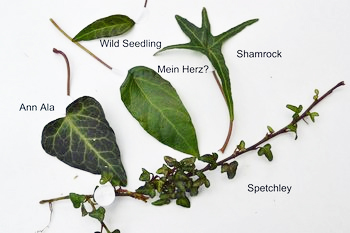 Finally an honourable mention for H. helix ‘Erecta’: This is a form with very short internodes between the leaves, which as a result grows upright making small evergreen shrublet. It is another good subject for the shadier parts of the rockery or a raised bed. 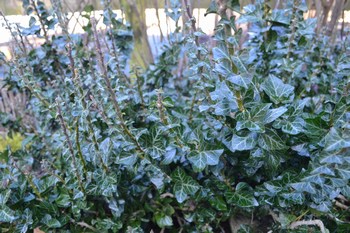