It has been a mild winter. Many of my borderline shrubs are positively thriving. Clethra pringlei, which is evergreen in its native Mexico, is usually deciduous here, but this year the leaves have come through unscathed. Buddleja colvilei has kept all of its top growth and I am hoping for more than the one or two flower spikes which it usually produces. Even more surprising is that B. salvifolia has come through with top growth intact. I bought this during a warm season about 14 years ago. It thrived whilst the winters were mild producing superbly scented flowers, but when the more normal climate returned it became an herbaceous perennial, putting up a few weak shoots every year and then getting cut down in the winter. Now however it is close to its original size. Perhaps I will get flowers again. 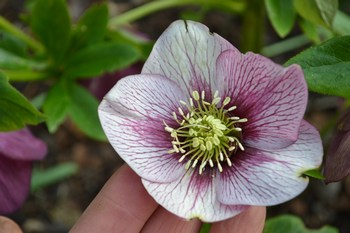 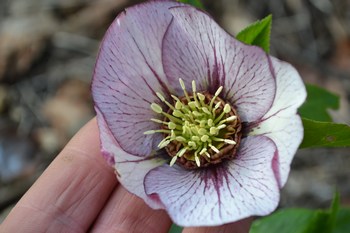 The winter has been mild, but spring is a little slow. Although there has been little frost the weather here has been cool and cloudy, and the normal progression through the spring flowers has been slow. The snow drops are almost over. We grow quite a few big patches in various parts of the garden, but very few ‘special’ ones. I am not a galanthophile. I cannot get excited about minor differences between spring bulbs. I don’t say this from any sense of superiority. I do get excited about minor difference between epidemiums, hydrangeas and several other genera. It’s just that I don’t have room for another obsession.

The dogs tooth violets get a little better every year. Ignoring the advice that they should always be bought in growth I bought several from Parkers in the autumn about 3 years ago. It is true that they have been slower to establish than pot grown ones, but they were a lot cheaper, and I now have a respectable doormat, if not a carpet of them. Also in flower is a lovely blue Ipheion that I was given several years ago by a friend in the Shropshire HPS Group. It is probably ‘Wisley Blue’. It does not bulk up quickly, but does seem happy. 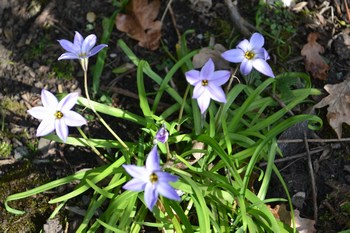 One way to follow the progress of spring is through the gradual flowering of the different species of cardamine. (How is one meant to pronounce this? I read it before I ever heard it said, so to me it is ‘Car-Da-Mine’. Some people have told me it should be ‘Car-Da-Mean’ and one speaker at our groups called them ‘Car-Dam-In-Hay’)

The first for us is a plant I bought in 2002 as C. laciniata, however the leaves do not fit illustrations of this species. It is earlier and far more vigorous than both quinquefolia and pentaphylla. These two follow on and are just coming into their own at the moment. C. glanduligera has just opened its first flower and kitaibelii has a bud. They will soon be followed by waldsteinii and then on to raphanifolia and the other species. I think they are an undervalued genus. They can be a bit invasive (you have to be vigilant with C. bulbifera), but many are summer dormant, and make a useful underplanting for deciduous shrubs. 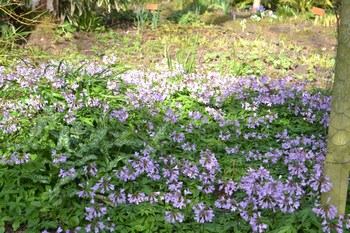 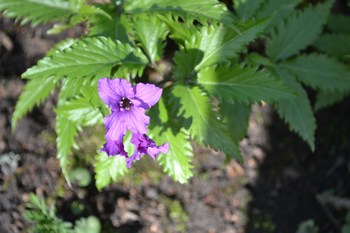 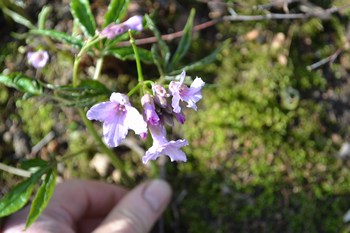 The hellebores are well into their season. A few years ago we bought several gorgeous plants from Ashwood Nurseries. We planted them together, and away from our other, more ‘common’ specimens. Each year Wendy has collected any self sown seedlings from under these plants, and this year the first of these have flowered. They are all very good forms, and resemble their parents much more than I had expected. So when you are taking out a second mortgage to buy from Ashwood, comfort yourself with the thought that you are not just getting a nice plant, but also some very good genes!

There is very little else to talk about this time. As I have been out of action for about a month Wendy has been almost full time on tidying for spring rather than doing the more interesting construction or propagation. I was able to get back into the garden about two weeks ago. We have about another two weeks of ‘tidying’ left and then I can start some planting.

Last year the first epidemium of the year was E. x warleyense ‘Orangekonigin’; this year it is E. pinnatum subsp. colchicum L321. The photograph shows it on 10th March. I bought this last year from Jullian Sutton’s nursery. It has flowered much earlier than the basic species and the flowers are slightly lighter in colour. A welcome addition! 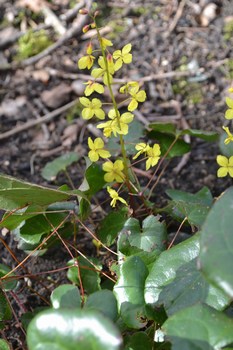