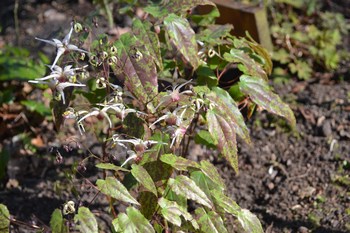 In the middle of the month I made some time to start planting out the various things waiting for freedom. Fifteen of these were new epimediums. (Yes I know it is an obsession!). I bought seventeen rare and unusual species from Koen van Poucke’s nursery in Belgium. They were all species/varieties not available in the U.K. They arrived bare rooted in autumn. Wendy potted them up, and I did not think I would be able to plant them out until this autumn, but all but five had made good roots over the winter, and I decided to do it now. I will not say much more about these as, with two or three exceptions, they are by no means spectacular. The other three specimens came from the ‘Desirable Plants’ nursery and are of more general interest. One is a Probst hybrid called ‘Domino’. This is relatively new to cultivation, but if it lives up to its billing it should become very popular. The flowers are large white and burgundy and held on long stems above nicely mottled leaves. The photo shows mine just after planting out. The second is called ‘Not the Little Red Rooster’. Not the best of names, but it is described as having crimson flowers over light green leaves. The final one, ‘Winter’s End’ is one of Julian Sutton’s hybrids. I have previously bought two from his programme. One of these, ‘Totnes Turbo’, is a hybrid between latisepalum and pinnatum subsp. colchicum. It is a good vigorous hybrid with two-toned yellow flowers. I was therefore attracted to ‘Winter’s End’ which is another pinnatum hybrid, this time with E. flavum. It is said to produce many yellow flowers held well above the foliage. The attraction of these hybrids is the combination of the vigour and drought tolerance of pinnatum with some of the floral elegance of the Chinese species.

I also planted out half a dozen Primula heucherifolia grown from HPS seed. It is quite a rarity, with only 2 suppliers in the plant finder. However it seems quite a robust thing, similar to P. cortusoides, but with larger, and, as the name implies, more heuchera-like leaves. It comes from damp shady places in Western China.

The other plants worth a mention are three plants resulting from the seed from Tom Mitchell’s Japan expedition that the seed distribution offered a couple of years ago: Rhus species TCM12-901, Hydrangea anomala TCM12-568 and Stachyurus praecox TCM12-960. We have several more plants from his seeds as yet not big enough to plant out. The cardiocrinums did not germinate until this year, but are looking good. All in all we have been impressed with the rate of success with the seeds from his collecting trip.

Wendy has been busy with pricking out and potting up. A major part of this effort is vegetables, but there are lots of interesting plants from the HPS and AGS seed distributions. I am particularly pleased to find four little seedlings of Syneilesis palmata. I have killed this and S. aconitifolia several times in the past. I had grown them in standard Asian woodland conditions of moist summers and well drained winters. However, last year I was advised by Nick Folks-Jones of Hall Farm Nurseries to keep them drier in the summer. I bought another S. aconitifolia from him and tried it. The plant is thriving. Flushed with success I am looking forward to trying S. palmata. 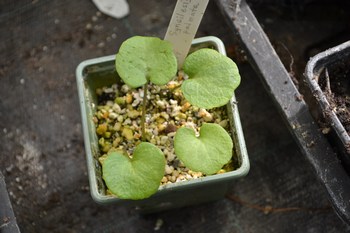 We have germination of several lilies and the cardiocrinums mentioned above, all from seed planted two or three years ago, so do not be too keen to throw away ungerminated pots… it can take some time.

Wendy has also just potted up a little plant of Ostraya virginica from 2012 seed (Jeremy Spon’s donation). It will be several years before it can face life in the garden. The same is true of the two Monkey-Puzzles grown from seed from the 2013 distribution, but as you can see from the picture, they are sturdy little chaps. Growing from seed is not for the impatient, but neither is it as slow as many fear. We have some big trees in our garden that started as seeds a few years ago! As in previous years I have talked about Magnolia and Camellia, I thought this year it would be good to describe our experience with some other spring flowering shrubs.

I do not grow many Forsythia. I think most of the varieties are very similar, and not that impressive. They are common in other gardens in our area and I decided to admire them for free! There is one exception; F. x intermedia ‘Arnold Giant’ is a beautiful thing. The flowers are larger and paler than in most other varieties, and it is worth its space. I’m not as rigorous when it comes to Exochorda. By far the best is E. x macarantha ‘The Bride’, and this is why it is the most commonly seen form. However I have two others which I grew out of curiosity. E. serratifolia ‘Snow White’ is more a small tree than a large shrub, and I have had to hack it back a few times since planting it 12 years ago. It flowers quite well, but not as well as ‘The Bride’. I have had E. korolkowii for 9 years. Although the books say it should be bigger than ‘Snow White’ for me it is smaller, making an upright shrub to about 10 ft. It flowers earlier than ‘The Bride’, but again, not quite as well. 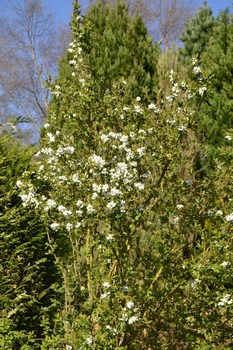 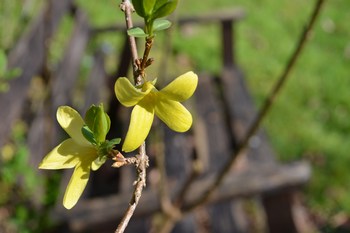 Hamamelis do not grow well for us, although many other members of the family do quite well. We have two species of Corylopsis: C. sinensis var sinensis and C. spicata. The former has longer, thinner racemes than the latter. Both are growing well. However I did have another form of C. sinesis that grew well for seven years and then died without obvious reason. I managed to collect seed from C. spicata this year. The trick is to pick the racemes just as the fruits start to open at the top (November) and bring them into the house. They will then crack open in the drier air and release the seed. I am hoping this trick will work for other members of the family and will try it for Fothergilla this year. 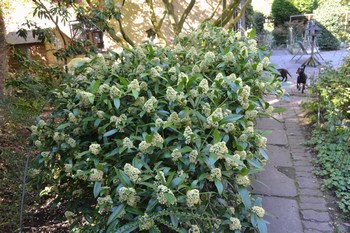 Viburnum carlesii and its relatives and hybrids are in full flower. We bought them for the scent, which I can no longer appreciate, but Wendy tells me they are pumping it out. Bodnant Garden grows several varieties, and a few years ago we went along the row of them to select the one with the (to us) best scent. It was V. carlesii ‘Diana’, and it has pride of place near the house. As does Skimmia ‘Kew Green’. Although it is a male (hence no berries) it is a hard working shrub. It is reliably evergreen, the flower heads appear very early in the year, adding interest. When they open in early spring they smell superb, and even when spent, stay on the shrub as a green decoration for several months. I read in ‘The Garden’ magazine that it is supposed to only get to 3ft. Ours is 5ft and still has ambitions. The picture shows it with two plant-destroying dogs in the back ground! 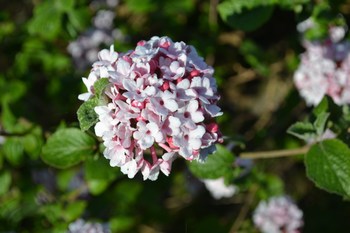