It has been cold, particularly at night, and things are late. I only finished planting out beans, courgettes and pumpkins mid-month, and the arisaemas have taken a long time to wake up. Candissimum finally showed a spike on June 10th and tortuosum and flavum on the 20th. However, the lower temperatures have resulted in the flowering shrubs hanging on to their blossom a little longer, and I have to admit the garden looks quite fine with weigela, philadelphus and deutzia all contributing.

We had two groups visiting mid-month: firstly people from the North Wales ‘Plant Heritage’ group and secondly from our local Shropshire HPS mini-group. It may seem elitist, but there is a world of difference between groups like this of people who are actually interested in growing plants and the average NGS visitors looking for a nice place to drink tea and eat cake. We gave up opening for the NGS about 4 years ago and have not regretted it. The organisation seemed more interested in having poetry readings or wine and cheese parties than in plant sales!

The HPS mini-group concept is thriving in our part of Shropshire/North Wales. There are about 25 of us. We meet (usually in a member’s garden) about once a fortnight between April and the end of September. Not everyone comes to all meetings but we average about 15 people each time. There is tea and cake... but the gardening conversations are the real point! I thought we would eventually get bored of seeing the same gardens over and over, but 6 years in, it is still interesting to see how others are developing their plots.

I have a problem. One of my hybrid Sorbus, originally grown from seed and now a good 20ft tall, has stopped growing. The flower buds formed, and the leaf buds started to break and then everything stopped. It has been like this for a month now. All the other sorbus are in full leaf and finishing flowering. Does anyone know what has caused this? I assume the plant will die as it will not get enough photosynthesis unless the leaves open soon. It is no great loss in that removing it will let in a little light to the bed beneath, and it will make a contribution to our firewood stock, but I don’t want it to happen to anything else. 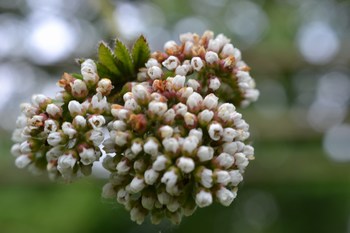 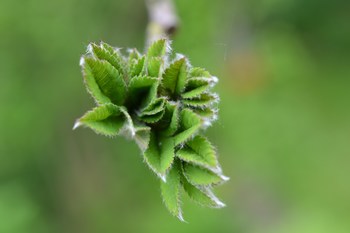 Whilst we are on anomalous growth, we have a renegade meconopsis. We grow a lot of blue poppies. For a long time we struggled to establish them. We bought plants and they were almost always monocarpic. Then I read that the trick was to keep them reliably moist in summer, and that they would grow well from fresh seed. So we bought a couple more (then called M. grandis... but now I think they were just ‘Fertile Blue Group’), planted them in the right place and collected the seed. 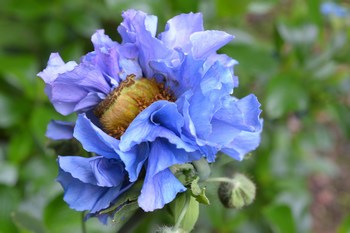 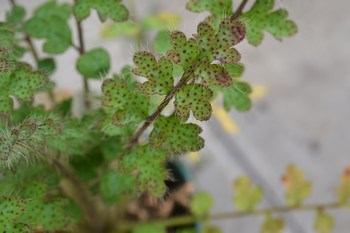 We now have a lot of them, including several white sports. Whether the semi-double is from our own seed, or from a pot of seedlings that we bought from our local HPS plant sale to expand our gene pool I don’t know, but it is certainly unusual.

Success with the blue ones has encouraged us to try several others. ‘Napaulensis’, by which I mean any of the big, monocarpic, felty-leaved plants with flowers in yellows, reds and pinks, are worth growing for the leaves alone. Again they are relatively easy from fresh seed, and worth the pain of having to provide new seedlings each year. M. quintuplinervia is a beautiful thing. It is quite small (15 ins or so) with nodding pinkish purple flowers. It is reliably perennial and seems to be slowly spreading. Unfortunately our plant has yet to set viable seed. We have also grown M. villosa and M. horridula from HPS seed. Both are monocarpic, but worth the effort. Finally I should mention M. dhwojii, a plant given to us by Ruth Plant. It is growing in our shade tunnel, away from all other flowering meconopsis so that we can get pure seed. It is from mountain slopes in Nepal. It has pale yellow flowers and is unfortunately monocarpic, but just look at the leaves!

I thought I would finish with a bit about calycanthus. The most commonly grown form is C. floridus. This is a nice shrub to about 8 ft that bears spicy scented flowers with several whorls of strap-shaped reddish brown petals. These occur in May/June for us. The plant is very shade tolerant, which is a good job as ours is in a very shady spot. However it would perform much better with more light. The western form, C. occidentalis is bigger and more sprawling in its habit; however it does not sulk if you cut it back to bounds. We have several, grown from HPS seed many years ago. The flowers are similar to C. floridus, but for us come much later in the year, often into August. The third species you are likely to see in gardens is C. chinensis. This used to be given its own genus, Sinocalycanthus but is now included in calycanthus. As illustrated in books this is a superb plant with glossy leaves and creamy-white , magnolia-like flowers with a central boss of stamens. We have bought it twice, and I have seen it in several gardens. It is always marred by brownish-black blotches on the leaves and flowers. I have not been able to find the reason for this. 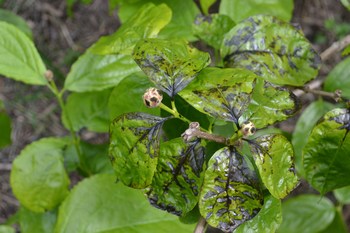 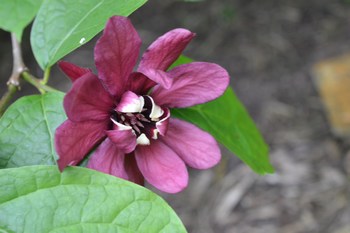 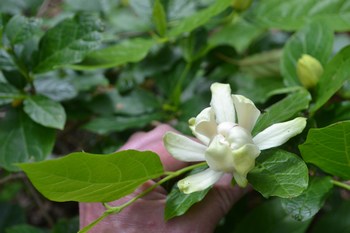 The real stars of the genus are the x raulstonii hybrids between floridus and chinensis. There are two in cultivation. ‘Venus’ has inherited the flower colour of chinensis but the petal shape of floridus. ‘Hartlage Wine’ has the petal shape of chinensis but the colour of floridus. Neither have the black blotching. Both are easy in a moist but well drained soil in a fairly open spot. They were a bit pricey when we bought them and are still not cheap, but worth the money in my opinion.

Finally a cautionary tale. We bought Robinia x slavinii ‘Hillieri’ from Blue Bell Nurseries in 2010. Very early in its life it forked. I know that you are supposed to discourage forking, particularly if the trees are brittle, as Robinia generaly are, but I could not bear to cut off half of what was becoming a beautiful thing. It flowered very heavily this year and obviously the weight of the wet blossom following a rain shower (there was little wind) was too much for it. I hope the remaining half can recover! 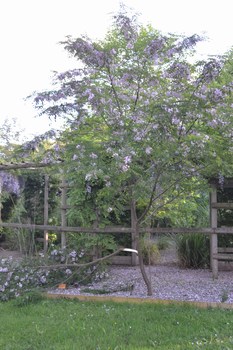