I was going to start by saying that ‘weeding continues’ but for many of the older areas of the garden I am not weeding, rather hacking back over-exuberant shrubs and removing the tops of herbaceous perennials that have finished for the year. The only really weedy areas are where I have spread my ‘lazy man’s compost’ and the weed seeds are germinating. Over the last couple of years the garden has started to mature a bit. Trees are getting to a respectable size and shrubs are more fully formed. The plan is that as we and the garden get older, shrubs and trees will shade out much of the herbaceous stuff and maintenance will decrease. Many of our trees are ready for a little crown raising. I notice that the lower branches are becoming sparse, or even dying back as they are shaded by those higher up the bole. A job for the winter I think.

The fruit and veg are producing well; unfortunately no raspberries this year. As I said in the blog last autumn, the old row had eel worm and we decided to plant fewer new ones as part of a plan to reduce the amount of soft fruit we grow. I have decided to do the same with strawberries and will remove about half of the plants this winter. I actually remembered to net a branch of our sweet cherry this year and they are excellent. The apricots will be next. The outside plant is a biannual bearer and produced a heavy crop last year, but the one in the polytunnel, which is normally shy of fruiting, is well ladened this year.

I have also been watering a bit. Whilst by no means at the drought stage there has been surprisingly little rain in our area this summer. When areas to the north and south are getting heavy showers, we are confined to a little light spray. The Shade and Woodland mini-group for our area are visiting the garden at the beginning of August, and there are few things more sad in the plant world than a thirsty hydrangea!

Wendy has been working mainly in the ‘nursery’ potting up our new plants. She has also been producing a few plants of our rarer hydrangeas that we have promised to the national collection in Derby. In addition to an excellent garden, Derby also have an excellent website dedicated to hydrangea, (http://hydrangeaderby.co.uk) that is useful for the novice as well as the addict.

Having other reasons to travel to the north Wales coast, we decided to spend some time at Bodnant Garden. It is the first time that we have visited since the new areas ‘The Yew Dell’ and ‘The Far End’ were opened to the public. We were very impressed and spent over an hour wandering without ever visiting one of the older areas of the garden. The new areas straddle small streams and there are pools and cataracts (see photos). They are also blessed with some very old, tall and beautiful conifers. Under these there is an under planting of many interesting and unusual small trees and shrubs. For example, Euonymus wilsonii was new to me. It is an evergreen. The flowers are a bit more conspicuous than most spindles, but the fruit are said to be interesting, being covered in spines like small hedgehogs. We will have to go back in the autumn. The herbaceous layer still needs some work, but Bodnant are good at making use of Rodgersia, Bergenia and Hosta in shade and some areas are well planted with these. Bodnant is definitely worth re-visiting if you haven’t been for a while. 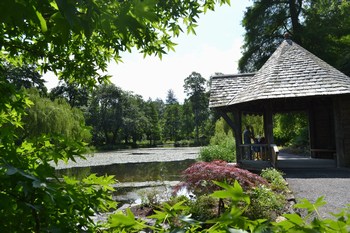 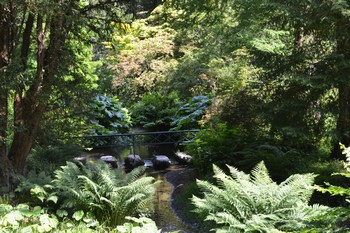 I’ve talked quite often in this blog about our success with Tom Mitchell’s seed collected in Japan. This summer two of his collections of ‘hemerocallis’ have flowered and are shown in the picture. I suppose it is one of the problems of collecting seed once all trace of the flowers are over and all you can see is strap-shaped leaves! Hemerocallis they may not be, but they are very pretty irises and are more than welcome to space in our garden. 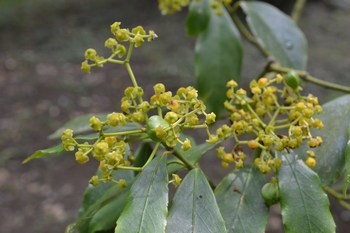 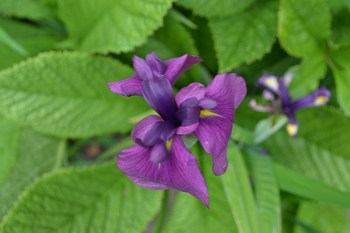 The meadow sweet in the hedgerows made me think it might be interesting to describe three garden worthy filipendula all with different characters. F. vulgaris ‘Multiplex’ has a neat base of divided leaves and slender but strong stems bearing clusters of double white flowers to about 12 ins. There is a superior form, ‘Devon Cream’ in the conservation scheme, that has neater, darker leaves and the flowers age to a cream colour. Both like sunshine and can be grown on a rockery. F. purpurea is a slightly taller thing to about 3 feet with bright reddish-purple flowers. It comes from Japan, and needs some summer moisture to do well. It will grow and flower in shade but is better with some sun. Finally F. kamschatica is a big beast growing to 6 ft. It has bold palmate foliage and terminal sprays of white flowers. We have two acquisitions; the first, now well established in a damp area of our garden, was from Ray Brown’s expedition to Sakhalin, the second is from Tom Mitchell’s collection in Japan. The latter have flowered this year, but still need time to bulk up. 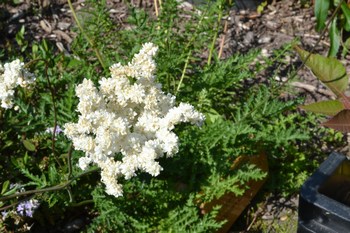 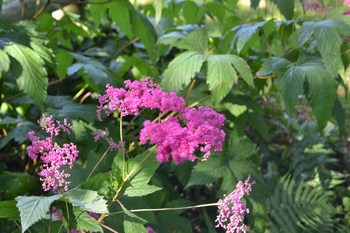 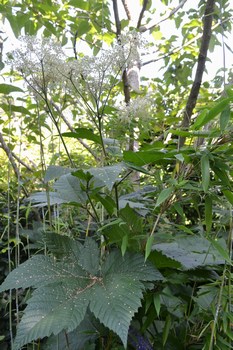 As usual a few shrubs that are looking good: 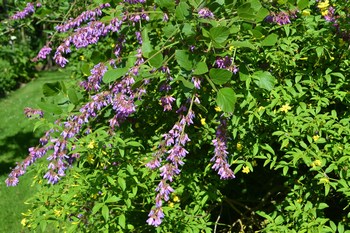 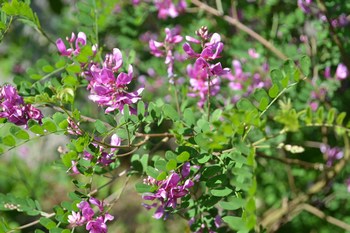 The first of our Hoheria is in flower. It is ‘Glory of Amlwch’. I think it is probably the showiest of those we grow, with larger flowers and bigger flower clusters. It is semi-evergreen and has benefited from the mild winter last year.

And finally a nice thing in a pot. Wendy has been growing this pot of Zephranthes grandiflora in the greenhouse for several years now. What a pity it isn’t hardy! 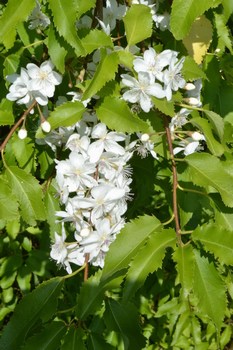 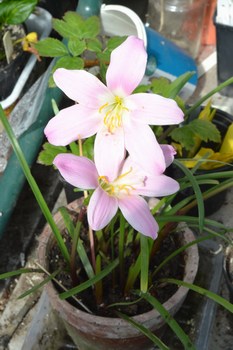