I have not been weeding... mainly because the garden was so dry that not even the weeds could grow. In the 3 months up to today (14th August) we had a total of ½in of rain. I have spent most of my time wheelbarrowing cans of water out to those plants showing the worst symptoms. It finally started to rain last night and I hope it keeps it up all day! We have quite a lot of stuff that needs planting out as soon as the ground is moist enough.

At the beginning of the month we drove the hydrangeas we had promised to the National Collection over to Derby. Their collection is looking fine even though it is mainly in full sun on a sloping site. It must suffer if they get a drought, but this year it looks good. Given the spending cuts it gets no financial support from the council, and relies entirely on volunteers. I think this may actually be an advantage, as it is in better condition than many collections still being run on a shoe-string by local authorities.Their soil is on the alkaline side of neutral, so the predominant colour is pink. I prefer blue, but pink is better than the wishy-washy purples that you get when the soil is neither one thing nor the other.

Whilst we were in that part of the country we made a visit to the Blue Bell Arboretum and Nursery. I had just seen Hydrangea hirta in the collection at Derby, and Blue Bell actually had it for sale. It is by no means a spectacular plant, being smallish with mid-green nettle-like leaves and flower heads without sterile florets, but it is the only one of the species in the McKlintock classification that I do not have... so one came home with us. It was joined on the journey by two new trees: Stewartia rostrata and Ailanthus altissima ‘Hongye’. The latter is a fast growing tree with superb purple, pinnate foliage. We have managed to find space for both, but they cannot be planted out until we have more rain. 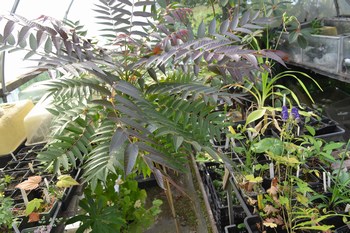 We had an interesting find in a small local nursery. It is a peloric form of Penstemon ‘Snowflake’. Peloric forms are radially symmetric flowers produced by a plant that normally has bilaterally symmetric blooms. It can be a simple mistake in development, or it can be genetic. It is often seen in foxgloves and snapdragons. Most showy Gloxinias have been deliberately bred to be the peloric form. It will be interesting to see if cuttings of our plant are also peloric. 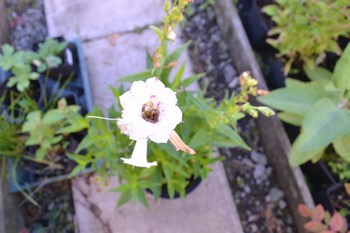 Gerald has started the big job of hedge trimming. He has finished the maze, but there is still a lot of internal beech and hornbeam hedges as well as a large leyland hedge on the western boundary to deal with. We also have a large leyland hedge to the south and east of the area immediately behind the house. It was here when we bought the house and has formed a good windbreak over the years. However, it is starting to die back, and the holly hedge that we planted 10 ft away on the actual boundary has now grown up and will provide protection, so we are planning to have the leyland brought down this winter. It will let a lot more light into the borders and withdraw a little less moisture from the soil. The picture shows it as it is now. Hopefully we will have an ‘after’ picture before the end of the year. 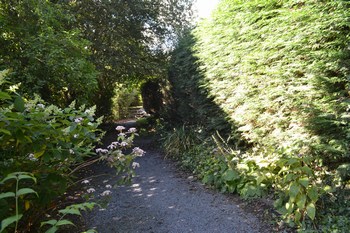 Wendy has been concentrating on propagation and growing on the young plants. The shade tunnel and nursery beds are full of plants looking for a home so that we can create space for the new seedlings and cuttings to grow on. We have some nice young seedlings of uncommon cotoneasters, seeds of which were sent to the distribution last year. Chasing them down online has been a bit problematic as it is obvious that Flora of China, which has the best descriptions, does not agree on the names given in the Plant Finder and The Plant List. I am particularly looking forward to seeing C. shansiensis when it grows up. It is said to have good pink flowers as well a good berries and autumn colour.

I am having difficulty talking about our plot in August without boring you all again with hydrangeas, so I have decided to describe a couple of less common woody plants, and then finish with some pictures of areas of the garden.

Wendy grew Meliosma cuneifolia from seed from the AGS distribution. (The taxonomists are still messing around with the name. The Plant Finder calls it M. dilleniifolia subsp. cuneifolia, but both Flora of China and The Plant List agree on plain M. cuneifolia.) We planted out two in 2003 into what became quite shady spots. They grew strongly into upright trees to about 15 ft. They flowered for the first time in about 2010. Most of the flowering panicles are up in the sun, but the picture shows one on a lower branch. I am told that they are strongly honey scented. The flowers are followed by little black berries each with a single seed. We bought M. veitchiorum from Larch Cottage Nurseries in 2013. The year before we had been to a talk by Kew Gardens’ Tony Kirkham. It was a tour-de-force. We were enthralled for a couple of hours. One of his statements was that his two favourite trees were Liriodendron chinensis and Melisoma veitchiorum. We already grew the former, and I filed the latter away as something to look for. We found it in Larch Cottage the following year. It requires quite an open sunny position, which we have managed to find for it. The plant has established well, and I really like the pinnate leaves. I think I will have to wait a few years for the flowers. 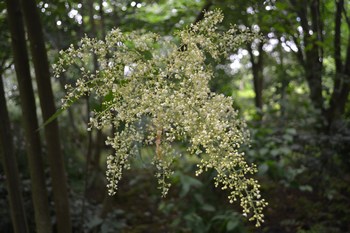 There are many good shrubs in the genus Deutzia, but D. taiwanensis is one of the best. It is strong growing with healthy dark leaves, flowering well even if your pruning style is to ‘hack back’. It is also later flowering than most of the genus, performing for us in late July and early August. 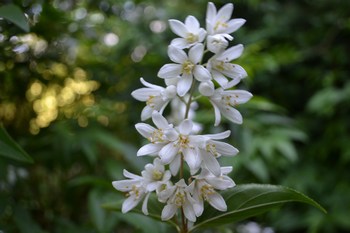 Finally three views of the garden.

Firstly looking down the area we call the fern gulley. It must have once been a green lane that followed the line of oaks when they were much younger. We have planted either side with ferns. It is a cool interlude on a hot day.

Secondly the view from an arbour seat at the entrance to the maze, looking down the path that eventually goes along the herbaceous borders.

Thirdly a view from the entrance to the ‘hydrangea garden’. This was the first area that I dedicated to hydrangeas... there are now several more. 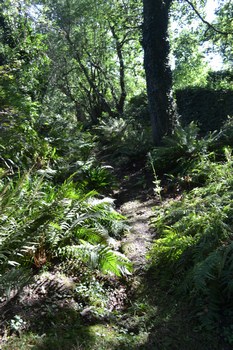 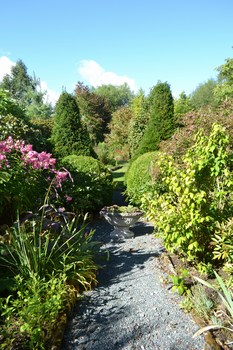 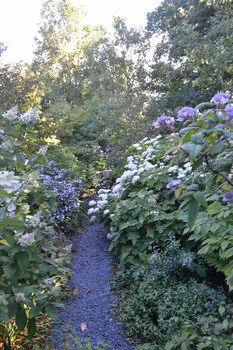