Last Month in My Garden: September 2015

We finally had enough rain to allow me to get out and plant all the new stuff that was waiting for a home. There were three trees and several shrubs. Two of the trees are Stewartia monadelpha. These plants, bought from different (reputable) nurseries are very different, one with drooping branches and large elliptical leaves, the other smaller, with upright branches and much smaller leaves. I have planted them close together in an area that will become a less-shady extension of our shade beds. I plan to underplant them with many of the good hydrangea cuttings that Wendy has produced. I have also been planting out some meconopsis. There were two crates (about 50 plants) of M. grandis. A lady sent this seed to the exchange last year, but it presented problems. It is generally accepted that the true M. grandis is no longer in cultivation, and that hybrids from it are members of the ‘Infertile blue group’. It thus seemed wrong to put seed into the exchange that would probably not germinate. However, we decided to give it a try ourselves. Germination was fantastic. It will be interesting to see if the plants are distinctive, or just look like ‘fertile blue group’. Wendy had also had with success with two species of Roscoea from the AGS seed distribution, R. schneideriana and R. australis. Pictures of the former are quite striking. It has a very large lower petal. I look forward to them flowering next year.

After three days planting there was finally space in the nursery beds and the shade tunnel so Wendy has been potting up this year's seedlings and cuttings.

I have also been busy collecting seed. I don't think it will be a good year for me. The dry summer has led to aborted seed heads on some of the herbaceous plants and the shrubs and trees seem to be late to ripen. I have, however, been successful for the first time in collecting some seed of the garden eucryphias. Two years ago I read in Dan Hinckley's book that last year's fruits ripened at the same time as the following year's flowers bloomed. Last year I failed to find ripe fruit, they seemed to be green and then disappear. Apparently they split and scatter their seeds very quickly. This year I collected them green and brought them into the house. They turned brown, split into several longitudinal ‘slices’ which opened and allowed the flat, winged seeds to fall out. I managed to get some seed from E. x intermedia ‘Rostrevor’ and E. glutinosa. As our E. glutinosa plants were originally grown from seed, there is a reasonable chance that they will work.

We have also had seed on our Arum creticum for the first time. I have had the plant for eleven years. It flowered regularly but did not set fruit. Last autumn a gentleman sent in seed to the exchange, and I emailed him saying that I thought they must be self-infertile as mine had never fruited. He kindly sent me some small bulbs to test this theory. I planted one close to my plant. It flowered at the same time, and my plant set fruit. Theory proved. 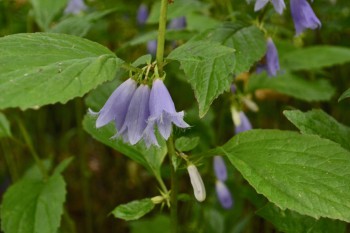 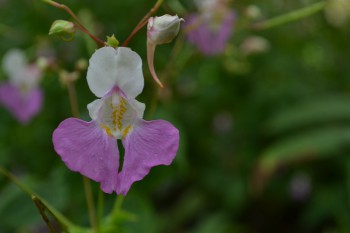 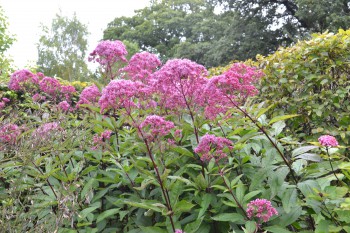 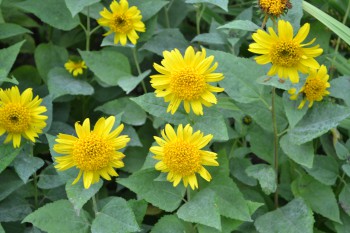 I thought it may be useful to describe a few late flowering herbaceous plants that we particularly enjoy. Hanabusaya asiatica is a campanula relative that spreads itself in dry shade. Although the flowers are smallish, there are plenty of them and it is happy even in quite a dark spot. Impatiens balfourii is an annual growing to about 2 ft. It is happy in sun or shade as long as the soil is not too dry. It is a rampant self seeder, firing its ‘touch-me-not’ capsules around freely. However the seedlings are easy to identify and pull out, leaving a few where you want them to grow. Eupatorium purpureum is a variable plant, but we are lucky enough to have a very good clone. I bought it from an NGS garden in the old days when plant sales were a regular feature of garden openings. It is a favourite with late butterflies. We grow quite a few ‘yellow daisies’. I think the old varieties, Rudbeckia ‘Goldsturm’ and Helianthus ‘Lemon Queen' both take some beating, but I also like Helianthus ‘Meteor’, a Conservation Scheme plant that does well in our garden. Another favourite conservation plant is Phlox ‘Grey Lady’. I think it is one of those plants that owe their lack of success simply to their name. Had it been ‘Lavender Lady’ or ‘Lady Grey’ or even ‘Fifty Shades of Grey Lady’ I think it would not need the attentions of the conservation scheme. 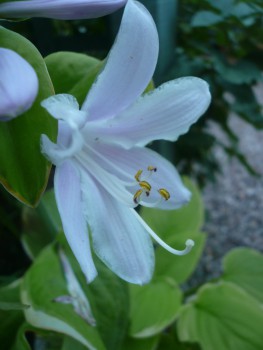 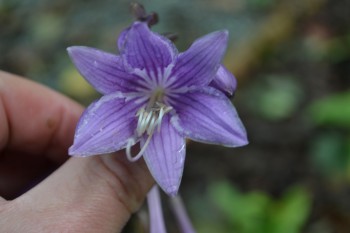 The hostas have almost finished flowering, but I think I should take a minute to sing the praises of hosta blooms. We do not need more indistinguishable variations of leaf colour, but there must be real opportunities to develop flower colour and form. I include two photos to prove the point . The first is ‘Fragrant Bouquet’ taken by Judi Deakin. The second is Hosta TCM12-838, grown from Tom Mitchell's seed. The leaves are a simple green, but the flower is quite fine. 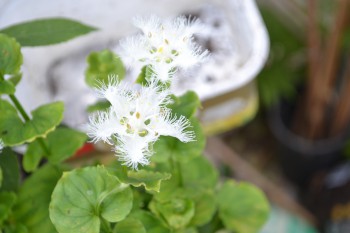 Whilst on the subject of intricate flowers, we just bought a very interesting little perennial from Edrom's stall at a recent plant fair. It is called Parnasia foliosa It grows on the banks of fast flowing streams and seems to need very moist, but not stagnant soil. Let's hope we don't end up killing it. 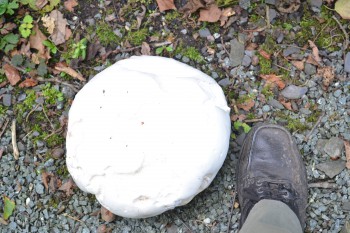 Finally a new growth along one of our paths (see photo). It is a giant puffball, Clavatia gigantea. To give the scale the shoe is a size 8. The mycelium feeds on decaying plant material so they tend to grow in nutrient rich, disturbed soils, although for some reason these are at the edge of a gravel path. They are now turning brown and will soon be releasing their spores. They are edible when young, but Wendy has a strict policy of only eating fungi bought from the supermarket, so these were left undisturbed. This means that the shaggy inkcaps, Coprinus comatus, which will be emerging soon are also left to turn black and melt.