Last Month in My Garden: October 2015

For the last month I have been pruning and lopping in an effort to constrain the growth in several areas of the garden. Firstly I have been tidying up the ‘wild’ bit at the north east corner. We built a path through this area a couple of years ago, and now it is time to clear out the undergrowth, remove dead branches and raise the crown to create a sort of open, woodsy area that will eventually house the several hundred ferns that Wendy has managed to grow from spores sent to the distribution scheme by the Fergusons. I have also been raising the crown on the rows of limes that we planted along the central axis of the west side of the garden (the ‘long borders’). The limes were planted as 3 ft whips in a double row about 30 ft apart in 1999. They are now well grown trees, and were beginning to seriously overshadow the central path and the shrub borders planted at their feet.

I have also been opening up the paths along hedgerows and am about to attack a ‘tunnel’ of Cornus siberica, which was planted along the northern end of the garden with the intention of having winter stem colour However they were neglected and left to their own devices and now need some serious work to enable Gerald to get at the hedge when he gives it his annual trim in a few weeks' time.

From the material removed we keep anything thicker than about 1.5 ins for the fire, the rest has gone for shredding, which has kept Gerald busy for the month. I seem to manage to cut down in a week of mornings what he can shred in a day. We are producing a good pile of shredding which will be used for mulch. 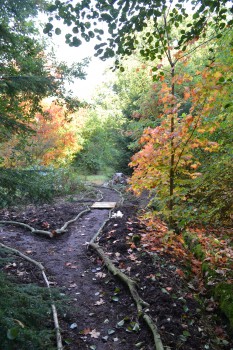 Wendy has been laying out and edging the new beds extending our shade garden. You may remember that one half of this is heavily infested with mare’s tails, and she has been assiduously pulling them out all summer. They are weaker, but you can never entirely eradicate them and we will have to continue to be vigilant. I hope to be planting this up in the spring.

In the afternoons for the past couple of weeks we have both been working on the seed distributions. This is a much easier job than it used to be now that we have two helpers to receive seed. So far (I am writing this mid-month) submissions have been down on previous years. It has been a bad year for seed set. 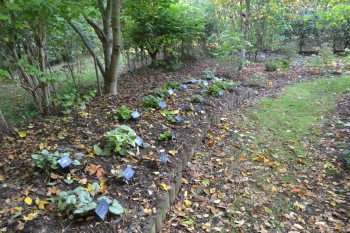 The other major occurrence this month has been that we have inherited a new National Collection. Tim Saville, who lives close to us in Wrexham had two collections, Hosta (tetraploid varieties) and Brunnera. He is moving, and so is arranging for new homes for them. We are taking on the brunnera. He arrived with 20 pots, each with a different variety and they are now planted out in the area we call the Aronia field. The plan is to let them settle in for a year and then propagate so that we can establish two other samples of each in other areas of the garden. Plant Heritage advise at least three samples of herbaceous plants as insurance against losses. I have also started seeking out others. This is part of the fun of a National Collection. It gives you the excuse to visit new nurseries (either physically or on line) in search of missing taxa. I will apply for formal recognition of the collection in a year or two. The new plants have made me take a more serious look at the genus. The varieties show differences mainly in either leaf colour and patterning or in flower colour. They seem easy to please: soil not too dry and some shade. The problems seem to be reversion and/or self-seeding into the crown of the mother plant, these two factors conspiring to gradually lose the real character of the variety. They are obviously going to need a little more care than Aronia and Clethra, which, once planted, mainly look after themselves. 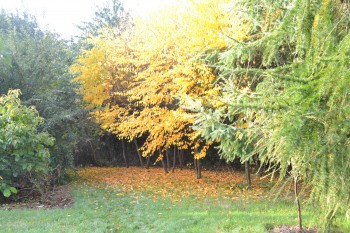 It has been a good year for autumn colour. Temperatures have been low and winds light, so many trees and shrubs have coloured up well. I have talked about Liquidambars and Cercidiphyllum before. This year I think it is the turn of the maples, oaks and birches. Betula alleghansensis used to be called B. lutea. This is a much better name as the autumn colour is a lovely yellow, fading to orange. We have a small stand of them, grown from seed and planted out in 2006. They are an easy, unfussy tree and should be grown more. The leaves look as good on the ground as they do on the tree. 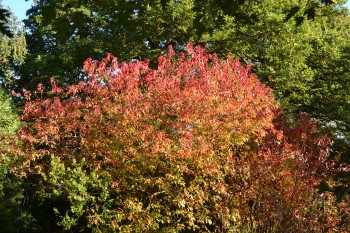 We also grew the Amur maple (Acer tataricum subsp. ginnala) from seed and planted it out in 1998. It is slow growing and has made a small, spreading tree with drooping branches. The autumn colour is a good orange-red. So far it has not set any seed, but it seems happy enough in moist soil in a fairly sunny position. 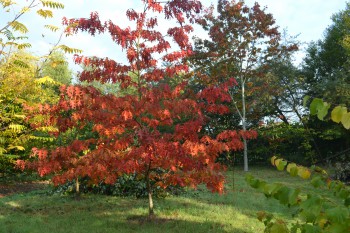 The red oaks (Quercus rubra) we bought at various times. We have a couple of fairly big specimens bought as whips in 1998 for 60p. The one in the photo is younger, probably dating from about 2002. These make fine trees if you have the space.

Finally a picture of some naked ladies behind bars…. the result of having to protect our borders from our (slowly improving) dogs! 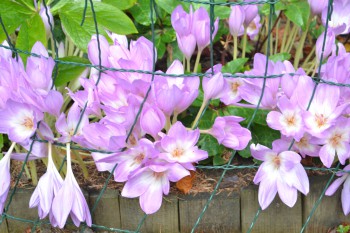