Last Month in My Garden: November 2015

The last week in October and the first ten days of November are the heavy period for our part of the seed distribution. It has been particularly bad this year because the late ripening of seed has meant that donors have delayed sending in their seeds until the last minute. On October 24th we had only 1300 seed varieties, and I was debating with Pauline Cooper, the seed distribution manager, whether we would be able to offer the 25 random sets this year. By October 31st we had 2100 entries and no such problems. By November 10th they had been shipped off to the groups that pack the glassine envelopes and we could return to the garden. 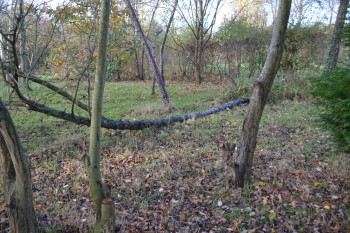 I have been starting the main winter tasks of clearing the borders and spreading compost and shreddings on the new areas that we are developing this year. Gerald is concentrating on his main winter jobs of trimming the mixed hedging and raking the leaves. Once he has finished this we have a lot of ‘chainsaw’ work for him. The dead sorbus needs to be brought down, he has to work on the old leylandii hedges that we want to remove, and in addition a sea buckthorn has fallen and needs to be chopped up. They have an unusual growth habit. Firstly they seem to make a tangled mass of suckered shoots, but then a few of these grow up into significant trees. These however seem to be weak-rooted and they start to lean as they grow. The fallen one had reached a rakish angle of about 45 degrees and made an interesting feature. Now it will make firewood.

Wendy is sowing our selections from the seed distribution. She is trying a new trick to help germinate difficult seeds. I was re-reading some old copies of the AGS journal when I came across an article by Jeff Irons (p 237, vol 7, 2004). He argued that leaf mould must contain chemicals related to gibberellic acid, and then carried out a trial to show that a decoction of it would promote germination in difficult seeds. The process is quite simple. You shake up some leaf mould in water, leave it to soak overnight or longer, strain off the liquid and use it to water the seeds. Wendy is carrying out some trials to see if it will work on some recalcitrant woodlanders.

Whilst on the subject of seed germination, two donors this year have donated seed of Arbutus species. One of them, Mr. P. Vine, also sent instructions for sowing. He uses a standard seed compost with a little extra peat, mixes the seed with an equal proportion of sand and sows thinly on the surface of the compost. He sprinkles a little compost to give a light covering and then stands them outside in a shady spot. The pots should be kept moist but not wet. The seed should not be soaked. When the seedlings are two to three inches high they should be potted on into a compost of 3 parts loam, 1 part peat and 1 part sand.

The winds have been bad, and I have replaced the wind breaks that I use to protect the large-leaved rhododendron species in the shade beds under the oak. They will stay in place until the spring. The wind breaks are a fine plastic mesh stretched across a wooden frame. The task is to slow the wind down, not to block it entirely as this just generates eddies around the break and can do even more damage than the wind. When we first moved here, it was a very windswept site, being open to gales from most directions. We put in boundary hedges to 6 ft. which helped, and also a central hedge running North/South which we have let grow to 20 ft. Wendy also constructed an open slatted 7 ft fence running East/West in the middle of the plot. These, together with the internal yew and hornbeam hedges that we planted, helped reduce the blast, and allowed the young trees to get up. Now we are quite a sheltered site, but the large-leaved rhododendron species are particularly sensitive… hence the wind breaks. 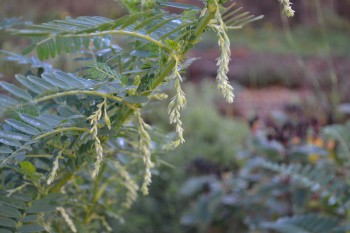 The mild weather has been confusing our plants. I enclose a picture of the flower buds on Clianthus puniceus. I don’t think they will make it through to spring. In the vegetable garden the courgettes are still trying to produce fruits. They don’t get any bigger than pencils, but still make a good addition to a stir-fry. We picked all the unripe tomatoes in the cold weather in October and brought them into the conservatory, where they have been ripening steadily and I have been bottling the excess.

Normally by this time in the year the conservatory would be full of our more tender plants, but they are all still happy outside, and Hydrangea aspera subsp. strigosa is in full flower. 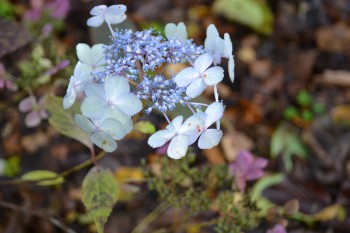 Hydrangeas are still looking good elsewhere in the garden. I include some pictures of a few. H. serrata ‘Bluebird’ is still producing flower heads. H. macrophylla ‘Hanabi’ is looking better than it usually does. This is a white lace-cap with double sterile flowers, and when grown well looks lovely. However it seems to need a longer, warmer season than we can usually give it. Finally H. macrophylla ‘Domotoi’ is still looking good. This should be called ‘Setsuka-yae’. It is an old Japanese cultivar, the first samples of which were sent to the west by a Mr Domotoi…. hence the confusion about the name. It is classified as a lace-cap, but is really a sort of intermediate form in which the semi-double sterile florets occur across the corymb, but at a lower density than in mop-heads. It is pretty either as pink or, grown on acid soil, as blue. It is surprisingly difficult to buy with only one supplier in the Plant Finder. It certainly deserves to be grown more. 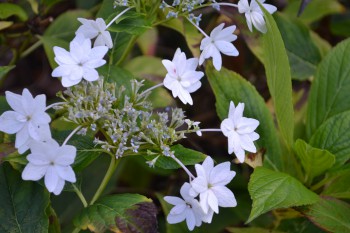 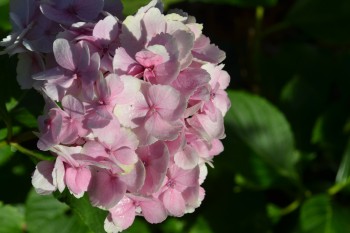