Last Month in My Garden: December 2015

This is the last ‘Last Month in my Garden’ that I am going to write. After three years I am running out of ideas. At least I feel more sympathetic than I did towards the editors of monthly gardening magazines. There is a reason they are so repetitive! I have enjoyed the experience and would encourage anyone to try. It has made me look more critically at how we garden and more carefully at our plants and their requirements. 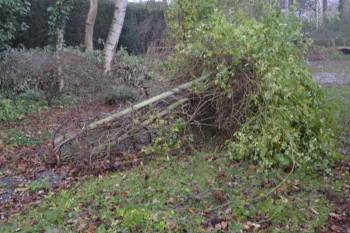 Although we have escaped the worst of the storms, and in fact have not had that much rain by our normal standards, we have had some high winds. There are a lot of small branches down from the trees all over the garden. There are also two more serious losses. A couple of years ago we lost one of the wooden tripods in our ‘Rose Alley’. That was not so great a loss as it was the end one of four, and the other three still looked good. This time it is the middle one of the three (see photo), which means that the other two will also have to come out. Whilst a bit of a loss, at least it will let more light into the shade beds under the birches to the west of the alley. The other loss is not yet definite. The wind has pushed a small tree of Salix magnifica out of the vertical. This is an unusual willow with large, rhododendron-like leaves. (When I first saw it on sale I thought it had been miss-labelled!) I have had the plant for 14 years and it has slowly grown to an upright, narrow tree to about 15 ft. It is positioned to the north side of a six foot wall. The wind has pushed it over so that it leans against the wall. I will trim it to try to redistribute the weight and then hope that it survives and comes into leaf in the spring. 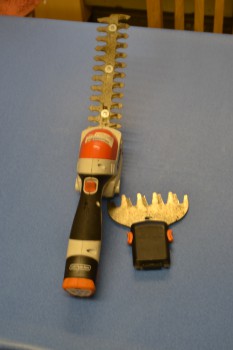 I want to sing the praises of a useful tool that we bought recently. It is a small, hand-held, cordless hedge/grass trimmer (see photo). Ours is a Stihl, but there are a couple of other suppliers of similar things. I thought it was going to be just another one of those tools that you use once or twice and then forget about, but Wendy persuaded me to buy it and I keep finding new jobs for it. It is obviously good for trimming small decorative hedges and shaped shrubs, the sort of job that is too small or delicate to get out the big hedge trimmers, and which, up to now, I had been doing with hand shears. It is also light and manoeuvrable enough to trim box balls and shaped yew. I then found it great for dead heading spirea, and I intend to try it on some of the more vigorous hydrangeas (arborescens and paniculata varieties) later in the winter. Wendy used the ‘scissor’ fitting to trim grass in awkward corners. Now I am finding it invaluable to remove the leaves from large patches of epimedium. I will also try it on the hellebores. It is a real time saver.

I have been spending some time tidying the vegetable garden for the winter. I am lazy when it comes to potatoes. I used to harvest them, wash them and store them in sacks, but now I just leave them in the ground and dig them up as we need them. If we have a really cold winter some of the top ones do get frosted, but the losses are not great and the saving in effort is considerable. On clearing up the runner beans I harvested several pounds of mature ‘kidney’ beans. They had not dried so I cooked them up without soaking and have frozen them. We had the first in a soup this Monday. They were very good. We have been letting the hens loose in the vegetable garden since October. They have done very little damage, other than stripping all the young leaves of the leaf beet. They occasionally taste the brassicas, but do not take much. Their consumption of layers pellets has decreased noticeably, so they must be finding something better to eat.

We are getting behind with our winter jobs. Gerald has just finished the hedge cutting and is now raking leaves from the areas of grass and the edges of the borders. Wendy is raking from the gravel paths. You may remember that last year we resurfaced the paths with 42 tonnes of pipe bedding dolorite. We find it quite easy to rake leaves off the surface of this without removing large quantities of the gravel. I think it is because the particle size is quite uniform. The base surface of ‘crusher run’ had lots of large pieces which caught in the rake. Dislodging them then loosened up the rest and it was all taken up with the leaves. As last year, we are spreading the leaves in areas of the garden where we are wanting to create new shade beds in a few years’ time, hoping that it generates a good woodland soil. I am still working on the winter tidying, which will probably take me at least another couple of months. I am constantly amazed by the sheer volume of herbaceous stuff that comes off the garden every year. I emptied a 6 cubic metre compost bin a few weeks ago and it is half full already. 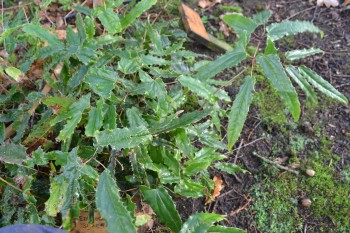 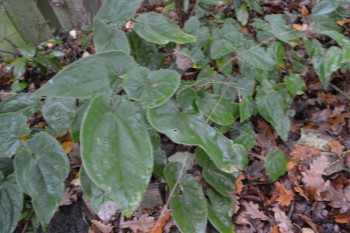 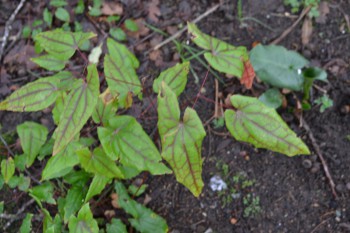 Over the past three years I think I have mentioned most of the plants that look good in the winter with one exception. Many of the Chinese species of evergreen epimediums and their hybrids have interesting leaves that can cheer a dull day. I show three that span the range of shapes. Firstly ‘Spine Tingler’. This is a selection by Darrell Probst, one of the leading lights of the epimedium world. It has the spiny leaves and yellow flowers of E. ilicifolium, which may be one of its parents, but the leaves are much bigger and the flowers a lighter yellow. The new growth is nicely bronzed, but these old leaves add interest at the edge of a winter border. The second is E. franchetii ‘Brimstone Butterfly’. Although named as a selection of the species, it is almost certainly a hybrid. In contrast with ‘Spine Tingler’ it has large, un-wrinkled leaves with shapes varying from rounded to elongated heart shapes. It is a vigorous clone and easy to grow. The flowers are lemon yellow. Finally a relatively new hybrid, ‘Never the Red Rooster’ which retains nice markings even on the old leaves. The flowers are crimson. Julian Sutton is responsible for the odd name. 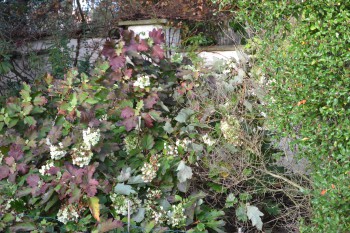 As I have bored you with hydrangeas for the last three years I thought I must end on another. The picture shows H. quercifolia ‘Snow Flake’. This is a sixteen year old specimen that has been planted in a south facing border with overhead shade. Although it will grow in shadier conditions, it needs some sun to flower well and to develop the winter leaf colour. It is a species from the Southern USA and needs some warmth. The mild winter this year has suited it.