Last Month in My Garden: February 2016

February is the month of the snowdrop and this year there have been plenty of days warm enough for them to lift their outer petals. (They do not do this until the temperature reaches 10°C.) Early in the month it was exciting to stroll around looking for plants that had newly broken through the soil, checking that I had not lost any treasures. When I first planted snowdrops in the garden, I did so in the shade; the cultivars bought in the mid-1990s are visible from my kitchen sink but get no winter sun. It does mean that the flowers last a long time and I can see them from the warmth of the house. As my collection slowly grew, some were planted further away but still in the same view and they revel in the sun. I think they are “happy” because in summer they are shaded by herbaceous plants. Two large clumps of doubles, ‘Ophelia’ and ‘Jaquenetta’, have had a number of buds which have not opened. At the Galanthus Group Study Day, Matt Bishop’s talk made me realise that this is due to congestion so I shall have to find time to do more dividing. It is probably best to divide snowdrops when the foliage is dying down but I often cannot see the plants then because geraniums, etc. have spread over them and out of sight is out of mind! 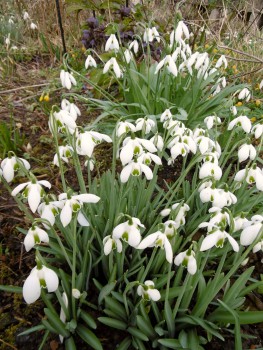 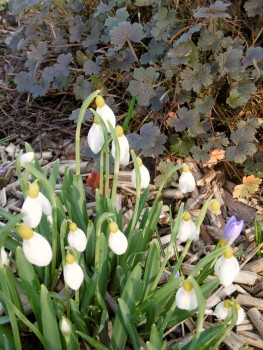 I like to see spring flowers carpeting the ground. Inspired, many years ago, by John Massey’s Cyclamen coum at Ashwood Nurseries, I planted some beside a small Lonicera x purpusii ‘Winter Beauty’, near a weeping willow. The shrub and the willow grew but the cyclamen did not form a carpet; perhaps it was too dry? Five years ago the willow was felled and last year I pruned the lonicera hard; now the cyclamen are improving. 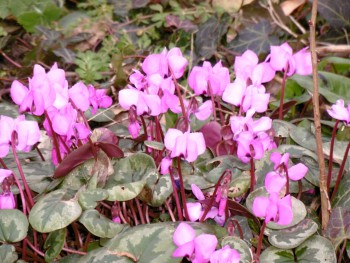 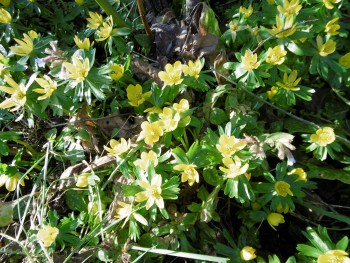 (In another area, I planted Cyclamen hederifolium ‘Amaze Me’ eighteen months ago; they established well but it did amaze me to find several seedlings recently.) I have been more successful with winter aconites. I started with fifty mail-order plants ‘in the green’; all were healthy but I was disappointed that they did not flower for two years and then only sparsely; they were, of course, too young. Always buy Eranthis in flower, or just gone over, so that you know they are of flowering size; you should get seeds the first year and your colony will begin to develop immediately. Mine is now quite extensive and attracts honey bees on sunny days. Another good carpenter is Cardamine quinquefolia, a herbaceous plant. The leaves appeared in early February and mauve flowers, on stems about 20 cm tall, followed shortly after; they will last for several weeks and then the whole thing disappears. It does spread but is no trouble in borders which would otherwise look empty at this time, i.e. among plants such as asters. Small irises have made mini carpets, ‘Katharine Hodgkin’ being the one I started with. Like the snowdrops, some of the clumps should probably be divided but I have never disturbed them; they increase steadily and flower reliably each year, planted at the front of a border in sun. 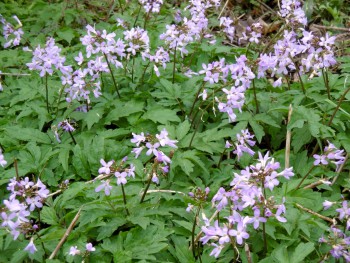 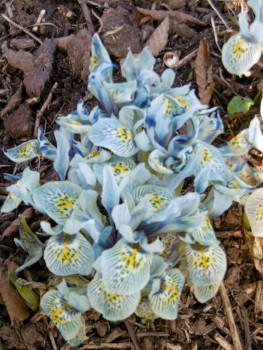 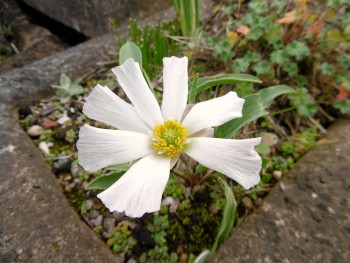 Ranunculus calandrinioides is the opposite of a carpet – a single plant in a trough. It was left-over at a Plant Heritage sale almost two years ago; I had never heard of it but the foliage was appealing. I Googled the name and liked what I saw but the reality last spring was far better; now it has survived a second winter. The flower is about 5 cm diameter, very pale pink with a deeper pink wash on the outer side of the petals. I grow it in full sun. 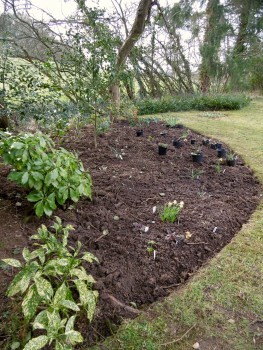 I have been working on a new border, an area beneath conifers. The previous owners of the house planted out some of their Christmas trees, which were quite large when I moved here and are now mature. The area used to be grassed but increasing shade had led to a tangle of ivy with several self-sown holly trees. Two years ago I removed some of the lower branches of the pines and thinned out the hollies, leaving just three. Last autumn more branches came off and five (unproductive) fruit trees in the area were cut down; (as the conifers had grown they had made the orchard too shady). Now it is considerably more open, the ivy has been grubbed up and the soil “dug”. It is not possible to dig properly because of all the tree roots but a lot of small roots have been removed to allow planting and I am adding plenty of garden compost to the holes. (This compost has to be buried because it contains weed seeds; I do make smaller quantities of weed-free compost which is suitable for mulching but reserved for asparagus, rhubarb and raspberries.) It is exciting to have a new planting opportunity and eases my conscience because I am using some of the many plants waiting for a home! A lot have come from the excellent sales tables at Western Counties Group meetings and three are recent gifts from other members there: Geranium ‘Jubilee Party’, Pulmonaria ‘Mrs. Kittle’ and Galanthus ‘Mrs Thompson’. At present the plants are relatively far apart but the few flowers stand out and each new growth will be welcomed. The photo shows the new border with another “scruffy” area in the background – the next project!