April – longer days and, one would anticipate, more gardening time. However, I have been away and when I have had time to garden, the weather has often been uncooperative: the end of the month was notable for cold winds and hail. I have managed to plant potatoes and some other vegetables. The broad beans sown indoors in November were (unusually) disappointing so I have put in another batch. 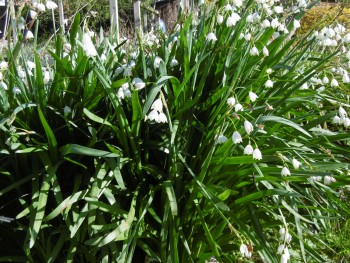 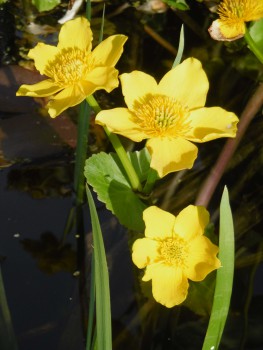 Cold weather has meant that the late narcissi have lasted well – increasingly white varieties, many bred from Narcissus poeticus. Another white-flowered bulb which came into flower in March and has lasted throughout April, is Leucojum aestivum ‘Gravetye Giant’. It likes ordinary to wet soil and can be treated like a daffodil. I planted some many years ago and have rarely divided them. The original clump is in sun and is now the smallest; I have another in a more shaded position and one on the edge of a seasonal pond. The flowers cut well. Oxlips, Primula elatior, also grow by the pond and in the water (which fills after heavy rain and then dries up) Caltha palustris, another plant I use for cut flowers. 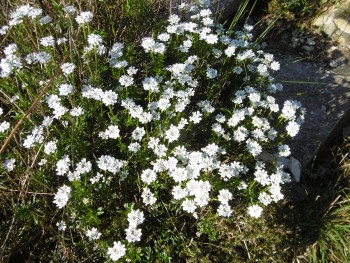 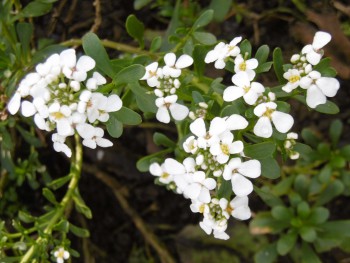 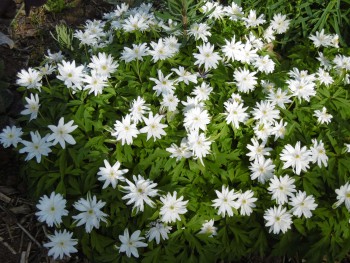 Iberis sempervirens has come into flower during the month; it is a low (15 cm), spreading, evergreen plant with very white flowers. Similar in flower, but more upright and shrubby (30 cm), is Iberis semperflorens. The latter was in flower during January and February but “rested” through March and has now returned to full impact; it is an excellent plant. Anemone nemorosa has also been a plant of the month. I have been collecting named varieties for some time but my original plantings were of the species (as tubers) under trees, since that is where they occur in the wild. They took a long time to establish but rewarded me eventually with carpets of white flowers. However, started as growing plants and given a partly shaded spot in better soil, they spread more quickly. The anemones colonise an area but arabis spreads out from a compact rootstock; I grow the double white Arabis alpina subsp. caucasica ‘Flore Pleno’ in low walls in sun. Other April-flowering plants I give good drainage in troughs are the cushion-forming Armeria juniperifolia and Pulsatilla vulgaris. I have seen the latter flowering on the Canadian Prairie, where it is called ‘Crocus’; it occasionally seeds in my troughs and I am always pleased to find seedlings. 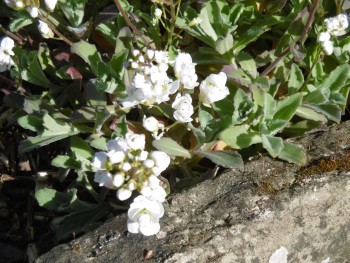 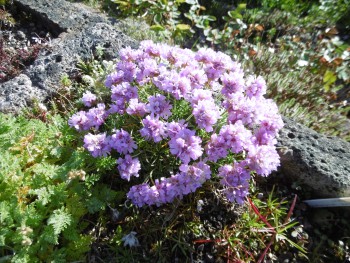 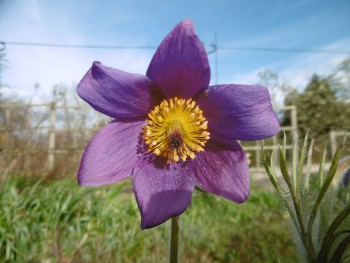 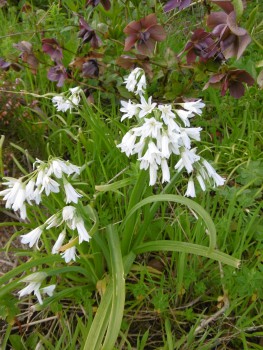 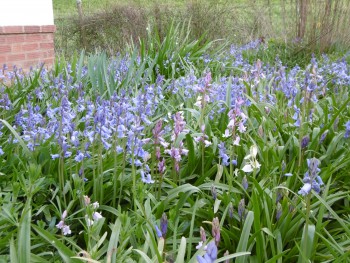 I allow a white Allium to grow in the garden, although many would not. I am unsure of the species; it has a triangular stem but is not the usual wild garlic. This one has seeded very slowly over about twenty-five years; the heavy clay may have discouraged it. Quite different are the invasive bluebells. I mentioned them last month and the photo shows them flowering in April (in a border I had “removed” them from!). 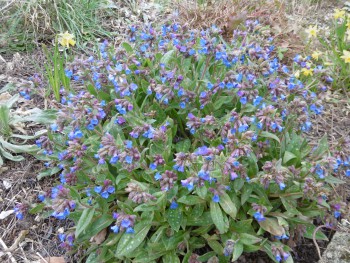 Pulmonarias have been important in the garden in April. I grow a lot and some of them have been flowering since late February, for example, Pulmonaria ‘Benediction’, which is in sun. Others, such as P. mollis, have come into flower only recently; P. ‘Elworthy Rubies’ is at its best in November but is still in flower. The HPS Pulmonaria Group held its annual meeting on April 16th, visiting Elworthy Cottage; now I have new acquisitions from the Plant Sales table to find homes for!