May has been a problem month in a variety of ways. The main problem has been a lack of time for gardening: I spent a week building and stewarding on the Plant Heritage stand at the Malvern Spring Festival then, after a week at home, went away for a few days. I have had a lot of potting to do so the time at home could not be used entirely for gardening. As usual, there have been warm dry days so I have had to find time for watering my many pots and newly-planted vegetables. I do not do as the experts advise and put in plant supports in early/mid spring, before herbaceous plants grow up (so that they grow through the supports), because I like to see bulbs flowering without ‘clutter’ and all my borders are mixed. This means that when the plants start to grow rapidly I have a late May crisis! John McGhee makes plant supports which can be put around large plants and are ideal. Beekeepers talk of the ‘June gap’, when there is a shortage of flowers and food for bees; in gardens, the flower gap can come in May. Tulips are an excellent solution, if there is a lack of colour, but my problem is that they are eaten, probably by voles, so that few of the hundreds I have planted remain. 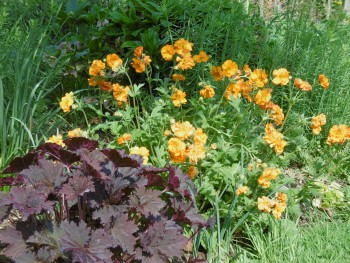 Fortunately, the geums came into flower in mid-May. I noticed one mature plant of G. ‘Mrs. Bradshaw’ which suddenly collapsed, probably because voles had undermined the roots. The last time this happened was the day before I opened my garden to an HPS group and I was most annoyed to have a large gap appear in the border. This year the HPS Hardy Geranium Group is visiting (on June 11th) and I have an Open Day on the 12th so I hope no more disasters occur! At the Worcestershire Group May meeting, geums were recommended for shade but I have always grown them in sun (as my father did). I like outward-looking flowers, rather than the nodding bells of G. rivale types, and am happy with large, bold colourful cultivars. G. ‘Mrs. Bradshaw’ is an old scarlet double and G. ‘Lady Stratheden’ the common yellow. The former has seeded generously but, sadly, I find the latter difficult to keep. (Perhaps I should try it in shade?) I have a trio of orange cultivars: G. ‘Dolly North’, G. ‘Fire Storm’ and G. ‘Mandarin’. Garden designers recommend repetition in a border and I agree with this but, being a collector, repeat with similar but different cultivars. G. ‘Fire Storm’ was bred by the excellent Terra Nova Nurseries. 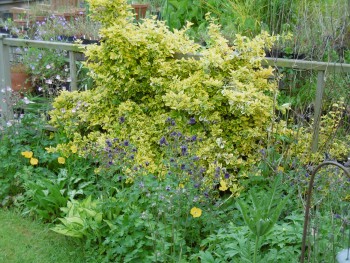 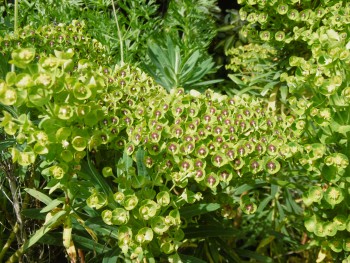 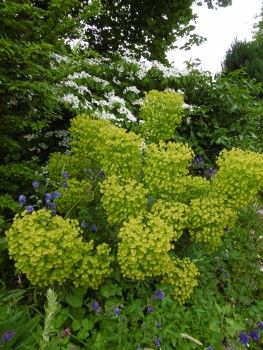 Colour is repeated across the garden, often by luck! When planting, I concentrate on the border I am working on but later notice (particularly from the kitchen sink) that the eye is drawn to similar colours. The heuchera in the photo echoes other dark-leaved plants, including Sambucus nigra f. porphyrophylla ‘Eva’ (syn. ‘Black Lace’). The shrub was planted four years ago and is now a prominent feature; I cut out some of the old branches each autumn but leave others to flower. (It has pink flowers.) You can cut down all the branches each year to keep the plant short and provide good foliage amongst herbaceous plants. Another shrub which provides good new foliage, in this case acid lime-green, is Euonymus fortunei ‘Emerald ‘n’ Gold’. I was inspired to plant it following a lecture by Fergus Garrett. Although my border is far smaller than that at Great Dixter, the euonymus fulfils the same useful role year-round. The lime-green is echoed in a border at the back of the garden which has Euphorbia characias repeated. The border was started in 2000 and I planted a few different cultivars in selected sites. They have died or been removed because they were no longer attractive but I have many seedlings. I leave those that grow in a suitable position; they vary considerably in size and colour. The photo shows one plant with particularly wide (~25 cm) heads which has been magnificent for months. In April, it was accompanied by Prunus incisa ‘Kojo-no-mai’ but, by the third week of May, Viburnam plicatum f. tomentosum ‘Mariesii’ was flowering. 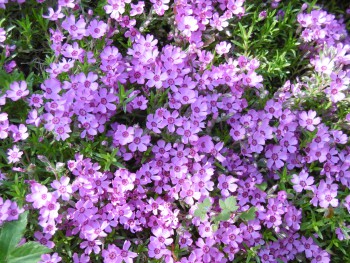 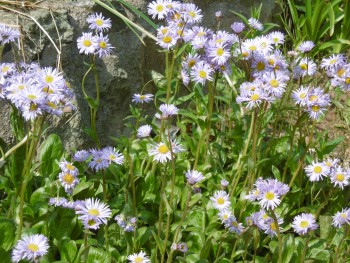 Alpine phlox provided mats of colour in the first half of May. One particularly good plant had much smaller than average flowers but covered itself in blooms; I have lost the name; can anyone help? (See photo) Erigeron pulchellus was also showy; an uncommon plant, it has 15 cm flowering stems. When I was first given it, I planted some in a trough and some on a solid clay bank. To my surprise, the first struggled and the second flourished. (This bank is also good for sempervivums.) Alliums began to flower in late May but they were a disappointment: I planted 100 ‘Purple Sensation’ two years ago but relatively few remain. I did get colour from oriental poppies. I have never managed to keep a white one but others do well; ‘Mrs. Perry’ has survived undisturbed for about 25 years. Honesty flowered in odd places; a particularly good plant, about 1.2 m tall, has self-sown in the paving outside my back door. After the abundance of bloom in April, the flowers of May have generally been appreciated more individually but there are now swathes of aquilegia and hardy geraniums. 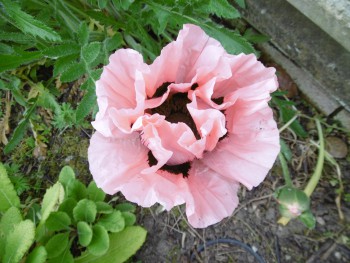 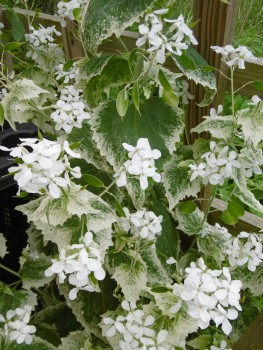 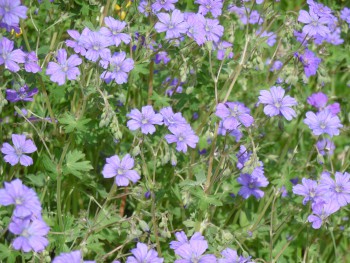 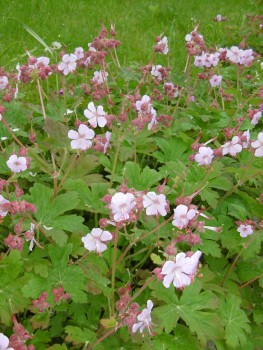 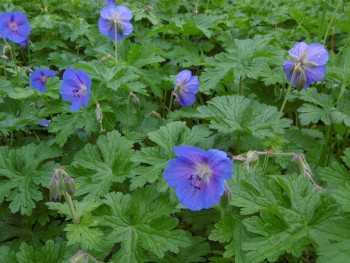