June has been a month of abundance. I have been aware of horrendous weeds vigorously romping through the borders but desirable plants have also grown at a prodigious rate. For example, a lovage, usually about two metres tall is now three! 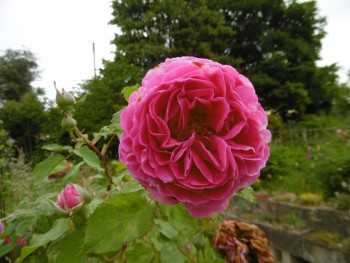 Roses have been looking as good as I have ever seen them. Most of mine were planted in the early 1980s and it was then accepted that the first week in July was the peak rose time but now they flower much earlier. Some of my original plantings (e.g. ‘Julia’s Rose’, ‘Just Joey’) died and ‘Rambling Rector’ was removed because it strayed into the netting of a fruit-cage, causing havoc. ‘Pheasant’, planted for ground-cover, proved to be much too big a plant. Those that are left receive the minimum of attention but still flourish. After a talk by Joe Sharman at HPS Western Counties Group on propagation, I feel inspired to take some cuttings, which I have not done for several years. 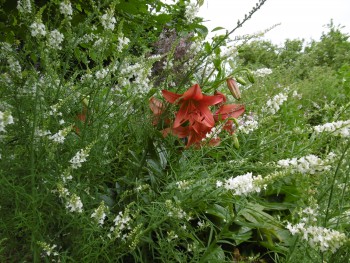 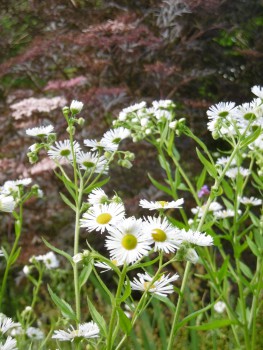 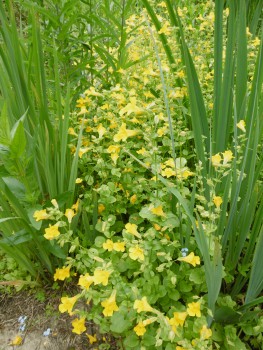 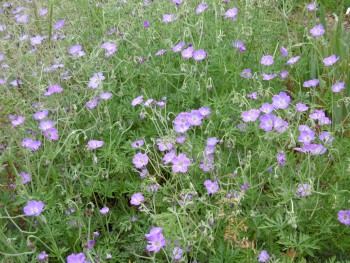 Self-sown plants have been prominent over the last month. Foxgloves, Digitalis purpurea, put themselves around as purple or white sentinels; two seeded between paving slabs and were hidden by surrounding pots until they flowered, when I did not have the heart to pull them up. Hesperis matronalis (Sweet rocket, Dame’s Violet) is almost all white and occurs in some large patches. Also white is Linaria purpurea ‘Brown’s White Strain’. It does produce some purple or pink seedlings but I pull them up as soon as they open in the hope that the bees will not have visited already. (It is attractive to bees.) I had Linaria ‘Peachy’ (sterile) but, sadly, it has not appeared this season. Another white flower is Erigeron annuus – erect (approximately one metre tall) and suitable for any position in a border but preferring to seed along the front edges or between pavers. Mimulus luteus seeds in my pond, where it is welcome, but also in a nearby border, from where I remove it. Geranium schlechteri seeds mildly but the plants spread out to 60 cm or more across, forming mounds of colour for a long season. It likes sun and good drainage. 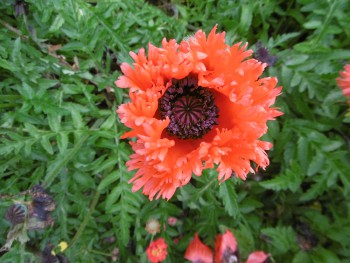 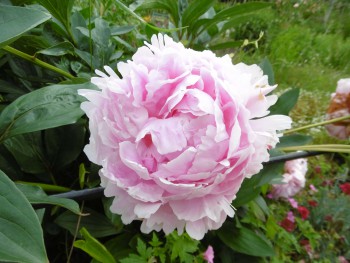 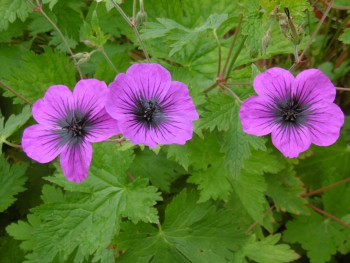 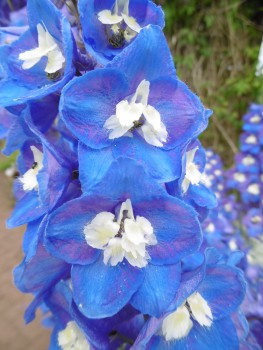 Oriental poppies were abundant early in the month; luckily I do not have the disease which has killed so many. I do not have many peonies but ‘Sarah Bernhardt’ has performed well, with very large flowers. Geraniums bred from G. psilostemon have all looked good, including DRAGON HEART (x G. procurrens); I repeat the colour along a border by using G. psilostemon ‘Coton Goliath’ and G. ‘Red Admiral’ (x G. sylvaticum ‘Baker’s Pink’). Elsewhere, I have G. ‘Patricia’ (G. endressii x), G. ‘Ann Folkard’ (G. procurrens x) and G. ‘Anne Thomson’ (G. procurrens x). My attempts to grow delphiniums have generally been thwarted by slugs but I have one clump, grown from seed, which has survived for many years. I also grew Alstroemeria ligtu hybrids from seed; one plant only survived and turned out to be orange-flowered. I planted it one autumn but was then told that I should have waited until spring! However, it has survived and thrived. It does run and flowers once only; the newer clump-forming, repeat-flowering varieties are better garden plants but I do enjoy the magnificent splash of orange once a year. (My adviser was Rowlatt Cook, a stalwart member of the HPS, who died in late June; she is commemorated by Pulmonaria ‘Rowlatt Choules’.) At the end of the month, anthemis and leucanthemums started to flower and will continue throughout July, creating more blocks of white flowers. ‘Cally White’ was a planted in 2012 and has been reliable and a good cut flower. 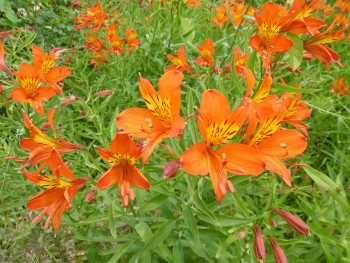 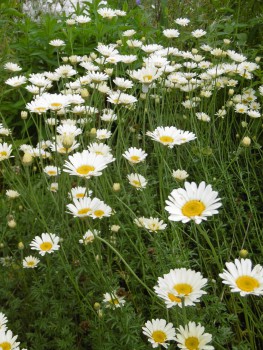