The borders are still abundant: rain at the start of July was followed by hot weather – good growing conditions for many plants. However, a mini-drought then occurred and some plants started to look sad. One elderly clump of Japanese Anemone hung its flower-heads. I watered it but the stems did not straighten and a large number of buds were lost. I was surprised because the adjacent phlox looked fine and phlox are usually one of the first plants to wilt; perhaps the anemone is too congested.

I do not have enough Phlox paniculata. I have some clumps twenty or thirty years old but lost some of my original selections and, although I have added others over the years, I do not have sufficient large clumps. I made an effort to plant more two years ago but am still waiting for the imagined profusion. There is usually a dry period before they flower: the plants need more moisture but my clay has some large cracks in it! Phlox maculata are possibly less fussy but lack the impact of P. paniculata. 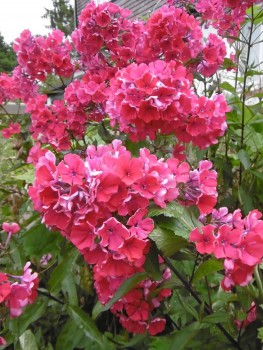 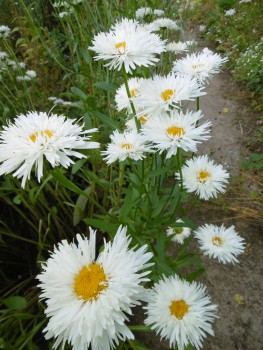 Leucanthemums have been “flower of the month”, creating white drifts across the centre of the garden; I have a good number of named varieties but also many self-sown single daisies. The latter are vigorous and I remove some clumps but leave others because they are good garden plants and excellent for cut flowers. Some of the newer cultivars have names beginning with ‘Shapcott’. They have been bred by Plant Heritage National Plant Collection® holder Anita Allen at Shapcott Barton in North Devon; her garden is well worth visiting in July and August. I planted three Shapcott varieties two years ago and they have multiplied well. 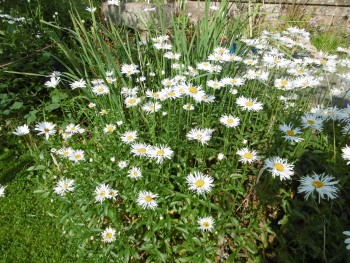 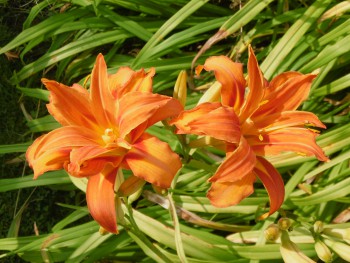 Hemerocallis form bold clumps, especially the old cottage forms of Hemerocallis fulva. They are unfashionable but, if you have space for them, they are useful and reliable. The double form is often incorrectly named. There is a plant called H. ‘Kwanso’ (now ‘Variegated Kwanso’) with excellent white-striped leaves and double orange flowers; if it reverts, it becomes H. ‘Green Kwanso’. This is not the same as H. fulva ‘Flore Pleno’, the flower of which has more petals and red in the throat. Another double I have grown for many years is the soft-yellow H. ‘Double River Wye’ and I have several dark red singles. I prefer old cultivars, such as the elegant yellow H. ‘Corky’ and H. ‘Pink Damask’, to many of the newer varieties, with vulgar bold patterns or “tortured” flowers, but I know many Hardy Planters disagree! 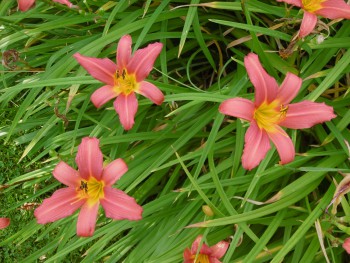 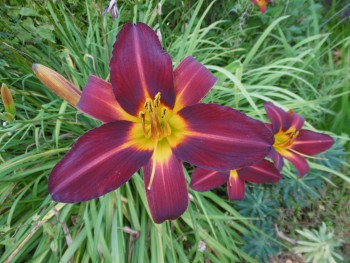 Fifteen years ago, I planted several kniphofia in a new border; most did not survive. It is possible that they did not like competition from hemerocallis and crocosmia, both of which have leaves that fall across neighbouring plants. At other times, I have had more success: Kniphofia ‘Tawny King’ is thriving in a situation which has become increasingly wet; it grows with astilbe, hostas and persicaria. Originally, the bed was home to my Plant Heritage National Plant Collection® of Geranium macrorrhizum, growing below a line of five mature inherited Cupressus leylandii. The trees were felled in January 2009, giving me more planting space and a completely different garden. Growth was good at first but over the last two years there has been water-logging: the geraniums rotted. When I removed the first area of “dead bodies”, I was so annoyed that I replaced them with semi-bog plants. I then felt guilty because I thought the area would be too dry for them in summer! However, they have done well and the kniphofia, planted in 2010, prospers. The area slopes slightly so some plants have better drainage: Geranium wlassovianum still succeeds at the top of the slope. I assume saturation has occurred because trees no longer absorb the water; I have been replanting the geraniums beneath other trees. Even after thirty-six years, I still have a lot to learn about my garden. 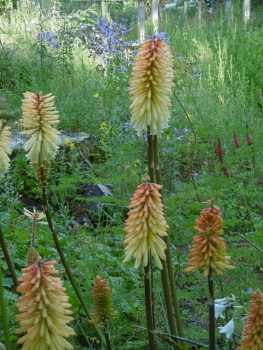 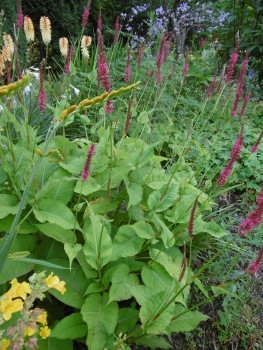