Following confirmation of Covid19 and in accordance with government guidelines, the office will be closed until the 17th January.
We will continue to respond to email enquiries.

An apparently new and virulent form of downy mildew is attacking Aquilegias. 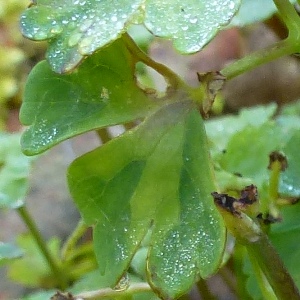 It does not appear to be the same strain that affects other plants such as Bizzie Lizzie’s and cannot be caught from them.

It has decimated the Aquilegias of one national collection holder who urges you to take action now.

Carrie Thomas of Touchwood Plants says that this year (2015) will be make or break for her collection. She says that “It may be that early identification, and removal of affected plants (or leaves) may be the only viable 'control' for home gardeners, although nurseries may be able to use a systemic fungicide as the mildew grows inside the leaf. New, spring, infected growth is quite distinctive, being more erect, with longer leaf stems to leaf surface area, and often being a whiter-green than normal. The leaf edges may curl (upwards or downwards) and eventually start to die and crumble away leaving just the main leaf veins. Plants may look sick, unhappy, blasted, blighted or frazzled. Slug slime on your plants may also indicate infection, as they graze on the mildew itself.”

I now see that I had some infected plants at least 1 year earlier, but had no reason to believe that a sickly-looking aquilegia plant had a virulent infection of any sort, let alone one likely to lead to the death of the plant after efficiently infecting other plants around it, as well as creating the long term issue of resistant, infective spores in the soil. Why did I not take a sickly plant seriously, especially as I am a biologist, and someone who works with health in people? Mainly it was that I 'knew' there were no terminal pathogens for aquilegias: my plant losses I have generally put down to unsuitable (mild, wet) garden conditions. Also, I garden mainly organically and, with a particular interest in the smaller wildlife of the garden and soils, apply liberal doses of interest and tolerance to almost any pest and diseases seen. However a kindly blind eye was the worst thing I could have done with downy mildew. I do not know if my collections will survive. I do not know if I will ever be able to easily grow aquilegias in this soil again. I'm hoping that nationwide prevention will be helped by providing this by information, thus leading to early identification. Immediate removal of any plant even suspected of having the disease, may be the only effective solution.

If you leave such systemically infected plants to grow, not only will they die but also, meanwhile, they will have efficiently infected other plants around them and likely contaminated the soil with resistant spores that may last decades. Later in the season the signs are different as infection occurs from spores: look for yellowy patches on leaves. The mottling is angular as it follows the leaf veins, and so is distinctly different from variegation seen in leaves of the vervaneana group. In suitable, moist, conditions the mildew grows out through the stomata and forms a downy covering on the underside of the leaf, releasing millions of spores. The downy growth isn’t always easy to see, as eg rain confuses the look of it, so the yellowy patches themselves are the easiest symptom to look for. 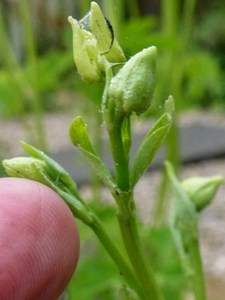 You should burn the infected plants and leaves if you can. Alternatively, use your local authority composting service or bury in it your garden at least 50cms (20”) deep. Do NOT put it on your own compost heap.

To identify the disease, look for lighter, yellowy patches on the leaves that is delineated by leaf veins but distinctly unlike variegated leaves:

Control infection by picking off all infected leaves, or, if as badly affected as this plant, digging it all out and discarding it (NOT onto the compost heap).
Initially there is little sign of infection on the lower leaf surface, and the variegated effect is very subdued from the underside of the leaf. 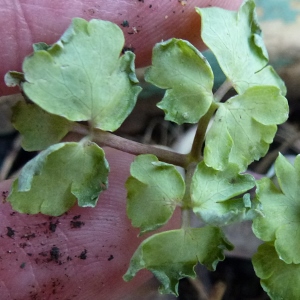 What is happening is that the mildew is growing INSIDE the leaf spaces, and into the cells within the leaf, so unlike powdery mildew, nothing is visible on the leaf surfaces. Under warm moist conditions, the mildew grows out through the stomata (breathing pores) of the leaf. Spore production probably only takes place during twilight or at night. You can then see the growth as fluffy white (downy) growth on the under-surface of the leaf although you will probably need the help of a hand lens or magnifying glass. However the growth may not look fluffy and the growth may be very difficult to see when the disease becomes more established.

Another grower reports “plants dying from the top downwards. We calculate that we lost somewhere around 4,000 plants”.

The Touchwood Plants website has a number of pages devoted to this topic:

Carrie is also compiling an online directory of areas where Aquilegia downy mildew is found. So if you find any signs, do let her know (email her at carrie.thomas@ntlworld.com). It’s even better if you can send a (digital) photo of confirmation. She is hoping that her directory will become an important epidemiological tool and aid scientific research into downy mildew. In addition she is urging all gardeners to talk about it, even if they have no signs of downy mildew on their own plants.

Make no mistake, she says, this is a killer disease. If you want to enjoy seeing the wonderful flowers of aquilegias in years to came, act now to protect the ones in your garden, and those of other gardeners.